Banking In Facebook, a 56-page report on Facebook strategies for financial institutions, looks at the reasons why banks and credit unions should establish a presence on the social network and the things they can do to make the effort pay off.

The report outlines 12 separate strategic uses for Facebook, breaking down 42 advanced tactics with 39 different case studies from within the financial industry.

The report is written by the team at Finovate, who also publishes the popular Netbanker website.

“Facebook has been a major social force for four or five years,” notes Jim Bruene, the report’s author. “However, it wasn’t until recently that brands have taken the platform seriously.”

Bruene says financial institutions have no choice but to get in the game if they hope to remain relevant to a generation raised by Facebook connections.

“Every major brand will be there eventually, financial services included,” he adds.

Simply putting up a page and doing the basics will show you “have a pulse” on Facebook, but Bruene says that’s just the beginning.

“If you want to differentiate your brand and/or yield a tangible ROI from your Facebook presence, you’ll need to expand into one or more advanced techniques,” Bruene writes in the report.

He outlines 42 different tactics, including dozens of case studies, ideas for contests that increase Likes, ways to integrate customer service solutions and apps/tabs you can develop. There are also a number of technical tips for Facebook admins looking to maximize their pages.

It’s smart to offer incentives and perks to those who Like you. First Tennessee promises “buckets of cash” in savings for visitors who click the Like button. 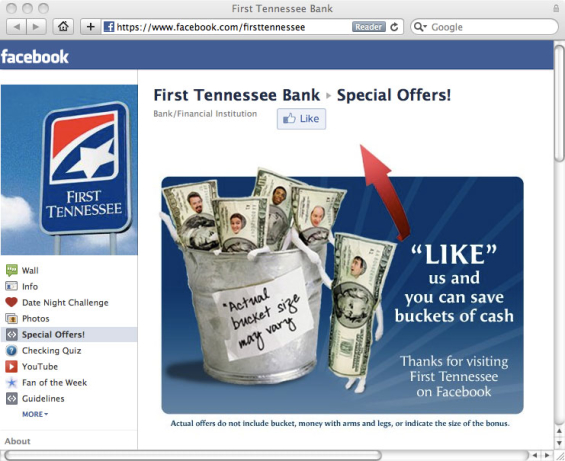 After visitors click the Like button, First Tennessee reveals the exclusive perks only available to Facebook fans: $100 for a new checking account, $50 refer-a-friend bonus, $100 for money market accounts and a 3.7% HELOC with a $100 Visa gift card. Who says you can’t sell financial products through social channels? 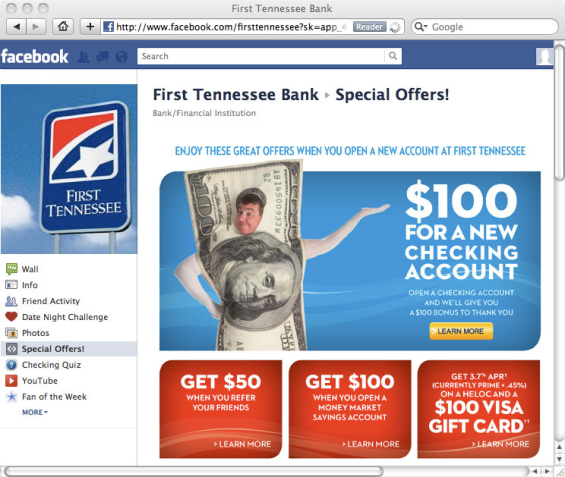 While some financial institutions are apprehensive about putting links to their Facebook page on their website, others are making an active effort to promote their involvement in social channels. ING Direct’s app for iPhones and Androids displays all the ways consumers can engage with the bank through social media connections. 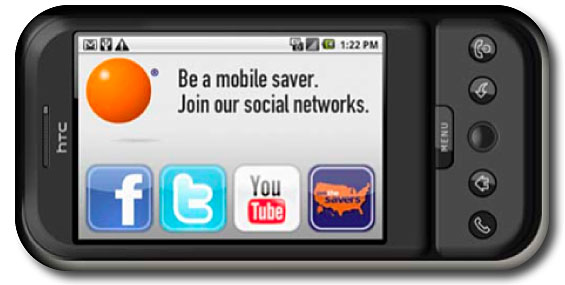 The financial industry is abuzz with talk of “gamification” — making banking fun and engaging by turning it into a game or competitive challenge. While not easy for smaller financial institutions, some could consider building Facebook games, like the retirement one Transamerica created, “Stash & Dash.” 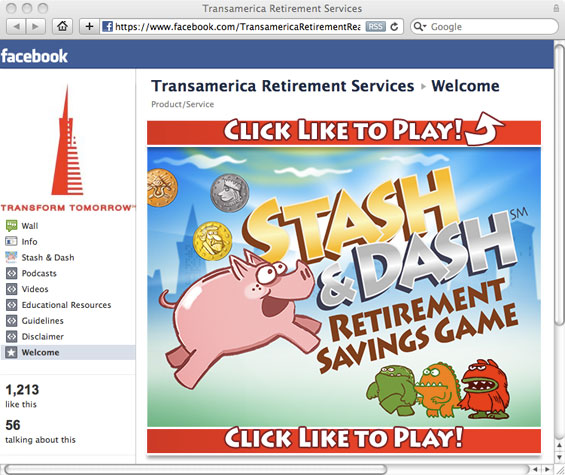 “While less than a quarter of Facebook users are currently open to viewing banking or spending data through Facebook, that is likely to change as banks begin offering transactional Facebook apps.”
— Banking in Facebook,
by Jim Bruene

Among the 12 reasons financial institutions should consider a Facebook strategy, the report lists SEO advantages, PR benefits tied to corporate giving initiatives, and (gasp!) even product sales. Many social media consultants advise against direct selling in social channels, but the report points out that Facebook “can also be used to directly sell products.”

According to the report, 47 financial institutions worldwide already on Facebook have more than 100,000 Likes/fans. The top eight have more than one million — all multinational megabanks and insurance companies based in the U.S.

The Facebook page for Progressive’s fictional “Flo” spokesperson takes top honors for “Most Liked,” with 3.44 million fans. Chase isn’t far behind, with their Community Giving page at 3.37 million Likes. The top credit union studied in the report, Navy FCU, has 23,700 Likes.

“If there was a neighborhood that 90% of your customers visited frequently — many every day — how much would you pay to have a presence there?” Bruene asks in the report. “If you were small, maybe $10,000. If you were Chase, maybe hundreds of millions.”

“Unlike online banking in the 1990s or mobile banking in the 2010s, there is no customer mandate that your bank be on Facebook,” the report says. “But ignore it at your own peril.”