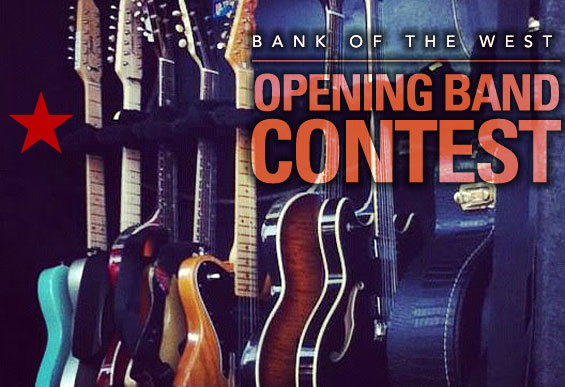 At the Facebook page for Bank of the West, folks can nominate and vote on their favorite local bands. The winning band will get to perform the opening act for Huey Lewis & The News at Memorial Park during a concert the bank is sponsoring.

The public is invited to nominate and vote for their favorite up-and-coming bands between May 1 and May 15, 2012. The contest is open to everyone across the U.S.

Eligible bands must be solo acts or groups numbering no more than six. All members of the band must be over 18 years of age. Acts incorporating unsafe behavior, obscenity, lewdness, inappropriate images, nudity, violence, bigotry, sexual innuendos, drugs, alcohol, anything illegal or otherwise deemed offensive will not be allowed.

Input for selecting the winning band also will be provided by judges hailing from Hollywood’s top talent agencies, including Warner Atlantic Records, Creative Artists Agency, Romeo Entertainment Group and others, as well as representatives from Bank of the West.

The judges will consider musical talent, such as musical ability, expertise and originality of music, and star power, including stage presence, personality and creativity.

After the top finalists are chosen by the judges, the winning band will be determined by its popularity among online voters.

Online public voting for the winning band will be held June 1-15 on Bank of the West’s Facebook page.

Bank of the West will announce the winning band in mid-June.

[Note: Readers who like this promo will also enjoy Dexia Bank’s amazingly innovative online advertising campaign that squeezed local bands into banner ads as they played songs live over the internet.] 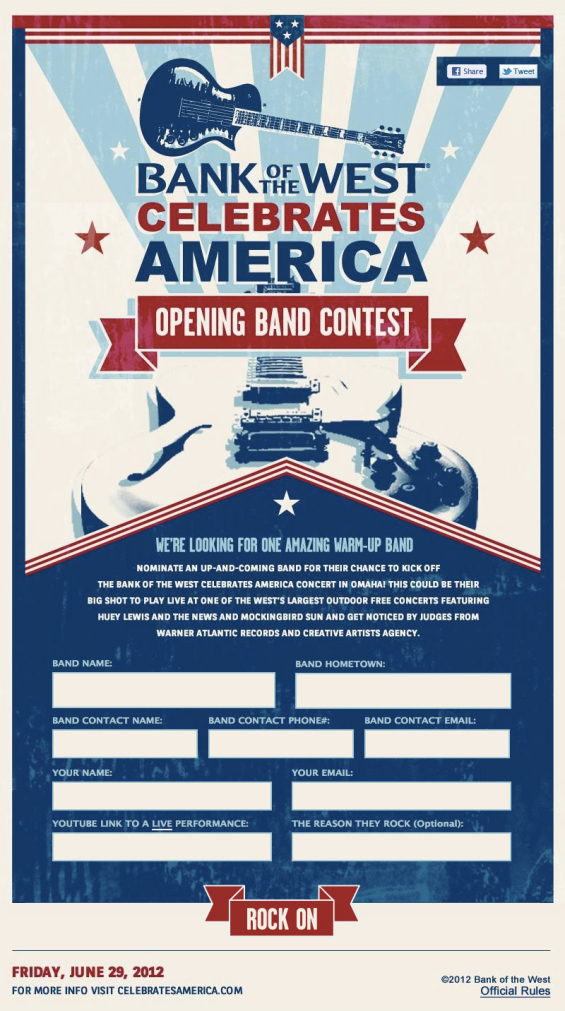 There are two ways to nominate a band. At Facebook, users can access the “Celebrates America” application by first liking Bank of the West’s page. Submissions must include a link to an online video showing a live performance of the band. Nominations can also be made by email.

Bank of the West’s Celebrates America concert, where the winning band will get a gig, has been held annually every summer for 22 years. It is a fairly prestigious affair, and one of the largest free outdoor musical events in the western U.S.

Bank of the West first launched its Facebook page back in February 2011. They have since accumulated over 17,000 ‘Likes,’ many of which were acquired through a college basketball promotion held earlier this year.

The bank isn’t promoting the band contest on its homepage, however they do have a link to their Facebook account in the lower right corner.

Bank of the West has $62.4 billion in assets operating more than 700 retail and commercial banking locations in 19 Western and Midwestern states. Bank of the West is a subsidiary of BNP Paribas, a global bank with a presence in 80 countries.