Subscribe Now Get The Financial Brand's FREE Email Newsletter
When activists in the Occupy movement blistered BofA on Twitter, the bank's auto-responder sent cheery, generic tweets that only inflamed the situation. Social media critics decry the robotic responses as an "epic fail," but is that really fair?

On a Saturday in early July, an activist in the Occupy movement using the Twitter handle @darthmarkh posted a tweet with a picture of him getting chased away from a BofA facility by cops in New York. He had just been chalking up the bank’s sidewalk with protest slogans. 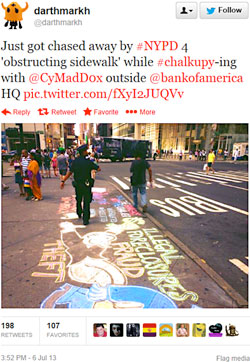 After a few retweets by other Occupiers, BofA’s Twitter robot decided to step in. “I work for Bank of America. What happened? Anything I can do to help?” said one reply. Another read, “We are here to help, listen, and learn from our customers and are glad to assist with any account related inquiries.”

From there, the situation spiraled downward. More and more Occupiers piled on, sending tweet after tweet eviscerating the bank with various grievances. With the filter on BofA’s Twitter account faltering, the robot continued to send one gleeful and generic response after another… which tickled BofA’s detractors immensely. They savored in the apparent insensitivity and corporate ignorance, snickering and giggling while pointing fingers and griping about callous indifference.

Be warned: the Twitter stream is uncensored and includes some coarse language. 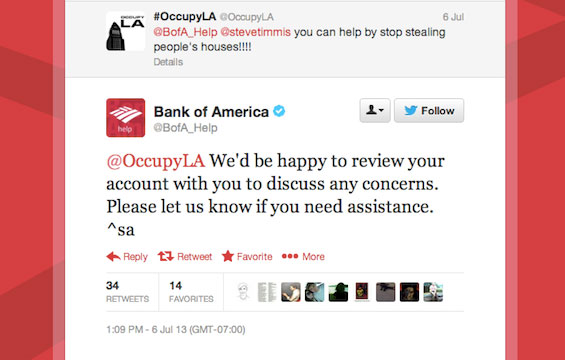 “When you’re the most-hated bank in the nation — even by your own customers — pretending to put a personal face on your social media doesn’t help,” said Chris Morran, a writer for Consumerist. “Especially when that ‘personal face’ is peeled back to reveal nothing more than an automated response bot.”

“Instead of looking like they’re listening to customers, you have to wonder if anyone at all is actually listening…
and, if they are, if they even have a brain.”
(Source: Lawyers & Settlements)

“BofA can still find ways to surprise us with their stupidity and ability to be completely tone-deaf,” wrote another blogger. “BofA offered to help people over and over and over, blissfully unaware that it had become the butt of a million jokes.”

Gizmodo called it a “hilariously epic mistake” on BofA’s part. Columnist Casey Chan thinks “the robot behind these tweets would have better filters that would allow it to ignore people who don’t have Bank of America bank accounts and are clearly making fun of them.

“You’d think there might be some human oversight, but nope,” Chan says. “It’s just a large corporation making a fool of itself on the internet.

Narratives in the modern media landscape demand a villain. Bloggers love to skewer “the soulless corporation that doesn’t get it.” But BofA could probably tell all those social media consultants, gurus and divas to just stuff it. After all, many of them have offered the same unoriginal, uninspired advice for years that — even when followed — doesn’t produce the outcomes C-level executives expect.

Reality Check: Financial institutions will never meet most social media “experts” expectations. They will always have something to complain about — they’re ignoring social media, they aren’t listening enough, they aren’t listening the right way, they aren’t personal, they shouldn’t be selling, and (the least helpful) “they just don’t get it” and “they’re doing it wrong.” Most social media “experts” have absolutely no clue about the compliance and regulatory issues facing financial institutions on social networks. Banks make soft, easy targets for social media consultants who love using them as narrative foils.

Automated Social Media Technology? So What? Get Over It

Dealing with hostility in social channels is nothing new for BofA. Don’t forget, they were the focal point of the social media protest known as “Bank Transfer Day.”

According to BofA, they have engaged in over 200,000 interactions with consumers in social channels in the first half of 2013. Undoubtedly they see their fair share of complaints. (If you want to see how many consumers hurl insults at BofA in social channels, look at this Amplicate report.) That explains why the bank has a team of roughly 100 social media service reps. They send plenty of personal messages to customers. So it isn’t quite fair to label BofA as totally “tone deaf” just because it uses some software to help manage the online conversation.

“As for the robotic nature of serving folks on Twitter, I would fully expect financial institutions to incorporate software that enables them to monitor, serve, confirm, and cleanse the action,” he says. ” Financial institutions can and should seek to have the last word by responding to tweets. It has the effect of obscuring complaints when someone goes back to review old tweets.”

“That must be tempered however, because consumers will pick up that vibe and are likely to be turned off,” he cautions. “The use of technology could create a conflict between wanting to provide consumers with personal attention and wanting to deliver speedy, convenient attention.”

That BofA uses automated technology to help mange its Twitter activity should shock no one, nor should it be surprising that such a system will have its faults and limitations — that’s just the way tech stuff works. BofA’s Twitter filter probably attempts to classify tweets, starting with those from real people needing real human intervention immediately, all the way down to those that obviously warrant no reply at all (e.g.,”BofA shares up $1 today”).

That doesn’t mean the filter can’t be gamed for mischievous and immature fun. Unfortunately there’s nothing BofA can do about those who want to toy with the system for their amusement in the same that kids like to spell “boobies” on calculators upside down. Some folks get their jollies from hijacking and misappropriating tech in ironic ways.

The presence of a question mark could be a big syntax trigger for BofA’s Twitter filter, as would be anything mentioning a specific product. So an Occupy protester asking “Why does BofA fleece the American public with deceptive home loans?” might fool BofA’s filter to classify the tweet in the same way as it would a legitimate customer asking, “What are the current home loan rates at BofA today?”

Come On, Get Off BofA’s Back

BofA is not guilty of committing any cardinal sin of customer service. Honestly, it’s not even worth calling this a social media faux pas — certainly not an “epic fail.” (If you want to check out some truly boneheaded corporate tweets, take a look at the Consumerist’s “Twitter Wall of Shame.”) BofA’s motives are in the right place. They are trying to help real people who genuinely need assistance.

BofA has at least six official Twitter accounts. A few years ago, they said they reviewed some 20,000 tweets about their brand every month. Add in Facebook, and we’re probably talking about close to a million online conversations they are tracking every year. It simply isn’t reasonable for anyone to think BofA can respond to each one appropriately and personally. By using automation, BofA is effectively widening its net to help more customers more efficiently — it’s triage. Some people just like to vent online and don’t actually want service. Other issues are so complex, a call from a service rep will be necessary. Automated tweet replies help separate the wheat from the chaff.

Reality Check: BofA doesn’t care what Occupy protesters think of it. If the bank did care, there wouldn’t be the Occupy movement in the first place.

If BofA accidentally sends a few errant tweets to a faction of haters that will never do business with them under any circumstances, so what? Who cares? There is nothing BofA could say that would ever get them to change their minds. But if you are a real customer seeking help, you’ll probably be reasonably pleased with the response you get.

On a Saturday in early July, an activist in the Occupy movement using the Twitter handle @darthmarkh posted a tweet with a picture of him getting chased by cops away from a BofA facility in New York. He had just been chalking up the bank’s sidewalk with protest slogans. After a few retweets by other Occupiers, BofA’s Twitter robot decided to step in. “I work for Bank of America. What happened? Anything I can do to help?” said one reply. Another read, “We are here to help, listen, and learn from our customers and are glad to assist with any account related inquiries.” Unfortunately for BofA, its Twitter algorithm failed to realize Occupy protesters weren’t looking for customer support.