Subscribe Now Get The Financial Brand's FREE Email Newsletter
For three days in mid September, 494 financial marketers gathered in San Antonio for the American Bankers Association's annual marketing conference. 38% of them were tapping away on Twitter while they were there. Here's a selection of salient and noteworthy tweets, hand selected by The Financial Brand.
Subscribe Now! 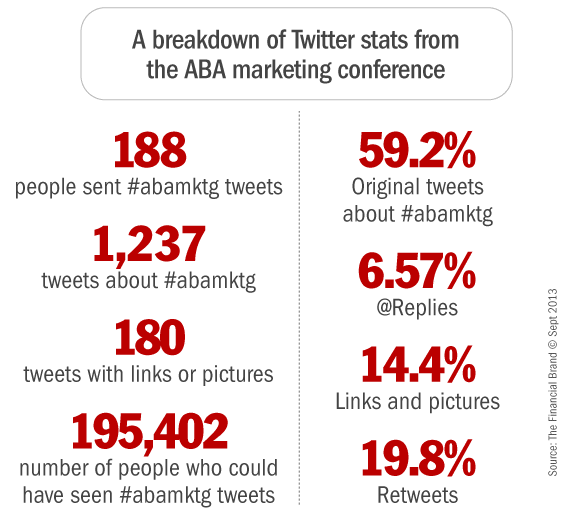 Things exhibitors told me at #ABAMktg conf 3: 60%-70% of customers will opt in to receiving email fm their bank.. if you ask.

"16% of CMO's believe they need to build their aptitude in social media to be successful." #ABAMKTG Source: IBM CMO Study 9/2013

Only 16% of CMOs think they need to brush up on their social media skills? And what about the other 84%?

Neil Hiltz of Facebook: Be a people-first business with a digital and mobile-first marketing strategy. #ABAMKTG

8% of USAA product sales come from mobile. Wow! Perhaps because users are looking at their smart phones 150 times per day. #ABAMKTG

"We have the most powerful 1:1 marketing tool that's ever been invented and it's in the palm of our hand." @neffhudson #ABAMKTG #abamktg

Tired of hearing about "mobile"? Usage is soaring and you are going to hear more. @neffhudson #ABAMKTG

When asked how many people in room of bankers were familiar with #Vine less than 20% raised hands | Good or bad? #abamktg

Maybe Facebook knows that Jeff’s wife @shannonmarsico has been looking at Burberry Brit Rythm perfume… or is likely to be interested in the product?

The ROI of social media is that your business will be around in 5 years. #ABAMKTG

Didn't make it to #ABAMKTG? Me either. Scheduling conflicts. So let's book our trip now to Orlando, FL for next year's conference 9/7-9/2014