There appears to be no shortage of opinions that banks don’t innovate (see here and here  and here  and…you can find the other 17 million references yourself).

a) They’re too stupid to innovate

b) They don’t know how to innovate

d) There’s been no need to innovate

If I were to take a poll, I’d bet that the majority of respondents would answer B, followed by C — even though many of you would like to select A.

I think the answer is D.

Despite these innovations, the industry has changed little in terms of power structure and business model (as it applies to the retail sector, that is). Even the sadly misguided Mashable article Can the Internet Replace Big Banks? recognizes this.

So why haven’t we seen large-scale, transformational change — or innovation — in the industry, despite the advent of the Internet, the Web, and more recently, mobile technologies?

Because — until recently — there has been no need for the industry to change.

For large scale change to happen in retail banking, three elements need to be in place: technology change, demographic change, and economic imperative.

There’s no formula, but if one of these elements isn’t sufficiently present, change isn’t going to happen.

Since the mid-90s, the emergence of Internet technologies has created the technology change required to cause industry innovation or transformation. With the advent of mobile technologies, even more technological change is pushing the industry to change.

Many Innovation Snobs think that this is sufficient to cause change, but it isn’t. And one reason why the technology change wasn’t enough was because we didn’t have sufficient demographic change.

Ten, even five, years ago, Boomers and Seniors dominated the generational composition of the US population. While we were willing to try technologies like online banking and bill pay, and even willing to open online savings accounts with a firm like ING Direct, we still did our banking business the old-fashioned way: We opened up checking accounts with the same old providers we did 20 or 30 years ago (although many of them merged along the way, of course).

It’s only been more recently that the demographic shifts required to effect industry change have come about. The emergence of Gen Yers as a significant percentage of the US population is a recent phenomenon. What’s different about this generation (from a financial services perspective) is their willingness (or desire) to find an alternative to checking accounts. When Seniors, Boomers, and even Gen Xers became adults, we automatically opened up a checking account. Not so with Gen Yers.

Without this demographic shift, the simple development of online banking, bill pay, etc. was insufficient to bring about large-scale industry change.

But even the demographic shift by itself isn’t — and hasn’t — been enough. There’s another reason why innovation hasn’t occurred, and I think the Innovation Snobs really miss this point: There has been (until recently) no economic imperative to change.

Ten years ago I did some consumer research about the drivers of customer loyalty in banking. I went out to my bank clients to tell them the findings, and tell them what they had to do differently to improve customer loyalty. Their response was pretty underwhelming: “Why should we do anything differently when we’re making money hand over fist?” 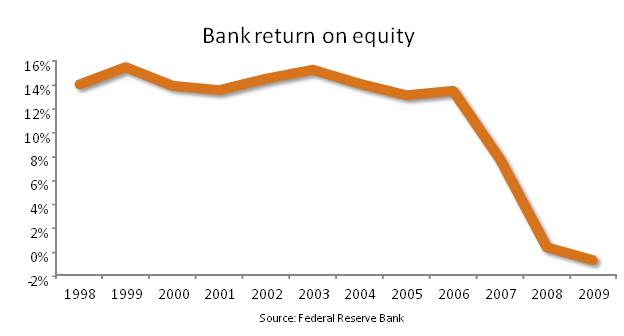 With those kinds of returns, who’s got an incentive to change?

This is why we haven’t seen the innovation that the snobs have called for. The elements of change haven’t sufficiently been in place.

But with advent of mobile technologies, the shift in demographics, and the economic issues facing the industry, we might actually be on the cusp of some bigger change.

Despite the rebound in industry profits since the worst of the financial crisis in 2009, ROE has not come back as fast, and is only at about half of the historical levels of 13%-15%.

How is the industry going to get there? For that, we can turn to another leading consulting firm, BCG. For the industry to reach historical levels of ROE, cost reduction could put 3 to 4 percentage points on the ROE level (that’s not 3%-4% cost reduction, you know). BCG believes another 2 to 4 points could come from pricing and growth. 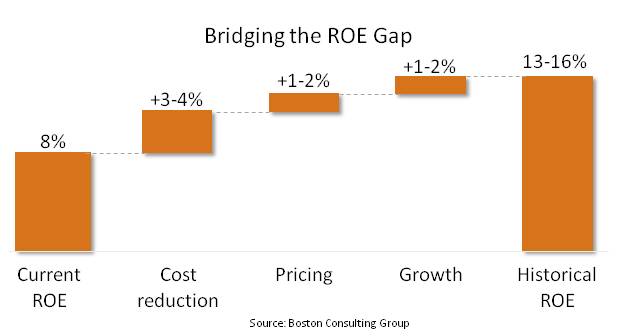 With all the regulatory changes that have occurred in the past few years, I don’t see how price manipulation is going to help. The banks have been limited in their ability to alter interest rates and fees every step of the way.

The demographic shift may help to fulfill the growth imperative as a new way of Gen Yers need mortgages and car loans. But the shift away from checking accounts (and the inability of banks to generate significant revenue and profits from these accounts) may inhibit the banks’ ability to put that 1 or 2 percentage points onto ROE through growth.

So we may actually see some innovation in the industry over the next few years. It’s not like the banks are too stupid or don’t how to innovate. They haven’t had the economic imperative to innovate. Until now.