EY asked consumers who had opened and closed bank accounts in the prior 12 months what their reasons for doing so were. Here’s what EY found: 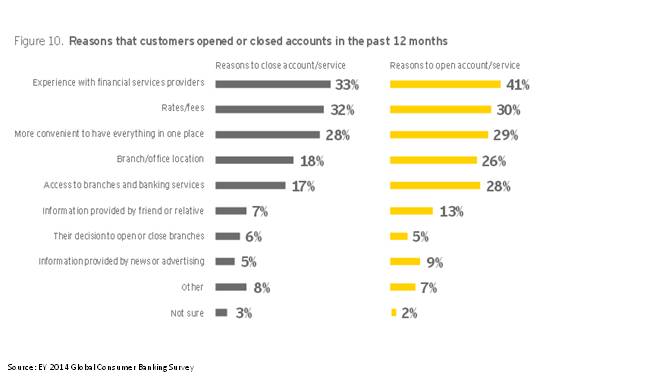 What EY captured were the factors that influenced consumers’ decisions.

(Before anybody thinks I’m trashing the EY study, let me admit that I’ve made this mistake–i.e., wording the question incorrectly–many times myself in the research I’ve done over the past 15 years).

There are a couple of other mistakes many of us are inclined to make when seeing survey results like this.

The first is that that we take the most-frequently cited answer (in this case “experience with financial services provider”) and conclude that it was the “most important” factor.

This isn’t a valid conclusion because it ignores that fact that a consumer’s decision to open an account, or select a particular provider is a complex decision that involves the interaction of a number of factors. We (as researchers) can ask consumers how important one factor was versus another, or what number of factors were involved, but I have become convinced after years of doing consumer research that consumers’ stated answers for how they make decisions are very unreliable.

The second mistake we typically make here is not distinguishing between decision factors and (what has come to be known as) the decision journey.

Knowing what factors influenced a consumer’s decision gives us little insight into how that consumer actually made his or her decision (oh, who am I kidding here–of course it’s “her” decision).

For example, were “rates/fees” the first factor a consumer took into account, then evaluated branch locations, and then asked family/friends for advice? Or did the decision process take the completely opposite path?

Again, these are hard things to learn because of our inability to remember every step of the process, as well as our biases towards wanting to be seen as making informed, rational decisions.

One of the more surprising (to me, at least) findings from the EY study was how few consumers mentioned “information provided by friend or relative” as a factor influencing their decision. This really flies in the face of a lot of research results that have been published.

The lack of impact from family/friend referrals was reflected not just in the factors influencing account opening decisions, but in driving trust, as well. Just 14% of consumers said “stories from friends or relatives” was a reason for having trust in a financial provider.

Given these results, it’s hard for me to see why EY put so much emphasis on the “power of advocacy” in the report. Seems to me that the opposite would be true.

Bottom line: Why do consumers open a bank account? Because they need/want to. What factors actually influence that decision, and how do they actually go about making that decision? I can’t say I’ve seen research that adequately answers those questions.