According to Callahan & Associates, at the end of Q1 2014, US credit unions had more than 98 million members. That implies that almost one in every three Americans belongs to a credit union (implies, because if there are people who belong to multiple CUs, membership penetration isn’t that high).

So why would I think CUs don’t get their fair share of the market? Because of the never-ending stream of research that shows that credit unions: 1) have higher levels of customer satisfaction than banks; 2) have earned higher levels of trust among consumers than banks; and 3) offer better rates and fees on deposit and credit products than many banks.

So the question is: With better service, better products, and more consumer trust than banks, why don’t credit unions have nearly 100% of the market?

In other words, how and why do “inferior” banks manage to get as much of consumers’ financial services business as they do?

My take: Because consumers don’t know how to shop for financial services.

It’s not about rational vs. emotional decision-making. It’s about unstructured decision-making, and consumers’ ignorance about how to make a better, more-informed decision about their financial services choices.

Research conducted by a couple of b-school professors helps to shed light on this problem (from a more general, vs. financial services, perspective). In a study titled Decision Difficulty in the Age of Consumer Empowerment, the authors write:

“Today‘s decision environment offers consumers greater choice possibilities and information opportunities than ever before. The current market environment empowers consumers, providing an unprecedented breadth and depth of consumer choice opportunities in a wide range of domains. Though choice freedom and expansion of information offer numerous potential benefits, they also can magnify such sources of decision difficulty as task complexity, tradeoff difficulty, and preference uncertainty.”

Regarding task complexity, the authors explain:

“A choice can be broken down into alternatives, attributes, and uncertainties, and that decisions become more difficult when the number of alternatives or attributes increases or when uncertainty regarding attribute values increases. Limited in their capacity to store and process information, consumers become overloaded and experience greater difficulty when the decision task is more complex and cognitively demanding. The format in which information is presented can contribute further to the cognitive demands required of consumers. For example, alternative-based presentation formats generally demand more cognitive resources than simpler attribute-based presentation.”

“Comparing and evaluating multiple options varying on different attributes can be cognitively taxing as consumers deal with the burden of multiple tradeoffs. Making tradeoffs in choice may not only be cognitively demanding but may also entail significant emotional difficulty. Prior to a difficult decision, consumers can experience anticipatory emotions such as fear, anxiety, and despair.”

And regarding preference uncertainty:

There’s a lot of academic-speak in the study, but the takeaway is that having more choices isn’t necessarily more beneficial to the consumer, if the consumer doesn’t know how to make a good decision among the alternatives.

Consumers may know that their current bank has (what they perceive to be) lousy customer service, and has high fees (or higher than they were in the past), but they don’t know how good the service at another FI really is if they don’t experience it for themselves (which is why they turn to peer reviews which may or may not help).

And financial services consumers are generally smart enough these days to know that “free checking” isn’t really free if there are overdraft and ATM fees, or inactivity fees, or membership fees. The link between behavior and cost is murky for many consumers.

It comes down to this: Credit unions don’t get their “fair share” of the market because consumers don’t know how to evaluate all the criteria involved in making a decision, are unsure of their preferences regarding these criteria, and–this is the kicker–often don’t even care that much about the decision to put sufficient time and effort in to make the best decision.

Take, for example, the following graphic I found doing a Google image search. Is there any research that shows that these are the criteria that are important to consumers? Or is there any quantification or proof of the claimed superiority? What should credit unions do differently? Change their marketing approach.

I’m not referring to product selector or configuration tools which helps a consumer choose between the offerings of a single FI, nor am I referring to comparison charts which try to compare various providers. 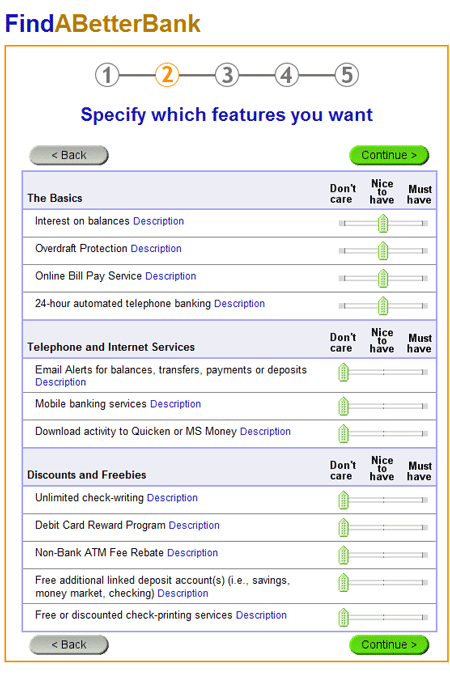 What I’m describing–as it relates to checking accounts, at least — is FindABetterBank.com. A tool that structures the decision-making process, and identifies the attributes and criteria that will influence the decision.

FABB goes ahead and supplies the data to fill in the blanks. But it would be a huge step for a credit union to just offer a mobile app or online capability to let prospects go out and get the data themselves. Today, they don’t even know what data to look for in choosing between providers.

You won’t always win the business (you shouldn’t–there’s simply no way you have the right product or service for every consumer). But you will generate goodwill, and have an opportunity to have meaningful interactions with prospects before they become members–and if you don’t win the business this time, it’s a good bet they’ll come back for help the next time they have a decision to make.