Each year, Gallup surveys consumers to assess their negative or positive views regarding a number of industries. In the latest survey, conducted in early August 2014, banks registered a net positive score (percentage of positive views minus percentage of negative views) for the first time since 2007.

Banks dropped into negative territory in 2008, and then plummeted to the negative mid- to high-20s from 2009 to 2012 (apparently, bankers and their mothers were surveyed, so banks managed to get a few positive votes). Over the past two years, however, banks have gained an impressive 36 points to rise from -28 in 2012 to +8 in 2014. 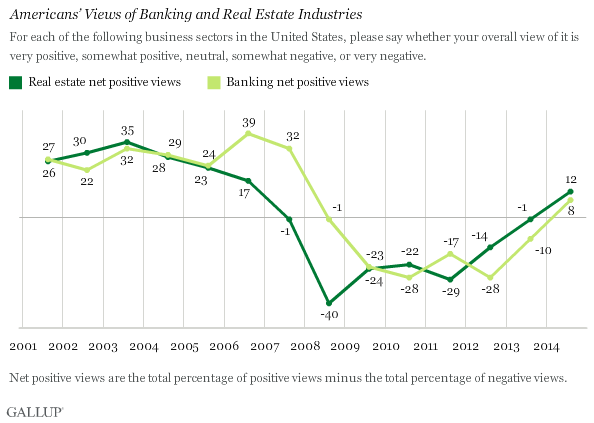 1) Banks proactively and willingly changed their pricing and lending policies and procedures to become more customer-friendly.

2) The CFPB enacted changes in the industry which forced banks to make their pricing and lending policies more customer-friendly.

4) Nothing changed, but fickle, short-memoried consumers forgot the depths of the financial crisis, and found other industries to focus their hatred on.

5) The economy improved, and sentiments towards banks rose, as it did for other industries (previously loved and hated).

Personally, I would hate to find out that theory #2 (CFPB) held any water, as I’m not a big fan of what they do. If that theory does hold water, though, it’s clearly not enough to sway consumers’ overall perceptions of the federal government, whose scores put it at the bottom of the 2014 list.

The CFPB’s actions over the past few years has produced a windfall of revenue for the government, with big banks paying out penalties almost as fast as retailers suffer data breaches. So, if anything, I would expect the CFPB’s actions to have a negative impact on the banks’ reputations, not a positive one.

As for theory #5 (rising tides), of 25 industries tracked, 20 of them showed an increase in consumer sentiment from 2012 to 2014 (none of the changes as dramatic as banking’s, however). So there may be evidence supporting this theory, but the scale of banks’ change in scores still suggests some other explanation.

Credit unions, in particular, should take note of this change in consumer sentiment regarding banks. In January 2010, in a post titled Credit Unions’ Biggest Enemy, I wrote:

“Public sentiment against the big banks is clearly helping credit unions’ cause. But public sentiment is a fleeting thing. Consumers have an incredibly short span of attention. We have an amazing capacity to forget and forgive. One teary confession and everything is back to normal (ain’t that right, Jimmy Swaggart?)”

A few months later, in April 2010, I wrote (again addressing my comments mostly to bank-bashing creditunionistas benefiting from the #MoveYourMoney movement):

“The populist anti-big bank sentiment isn’t going to last forever. America loves to find new villains to crucify. Knowing when to jump off the #moveyourmoney wave is a decision that needs to be made. I think it’s time to jump off that wave, forget the populist stuff, and get back to some serious marketing.”

You could argue–and it would be a valid argument–that a four-year run of negative sentiment towards banks gave credit unions plenty of running room to gain new members and new business. Which they did. But as a long-term strategy, it would appear that that run has come to its end.

What’s your take? What do you think accounted for the positive shift in public sentiment towards banks over the past few  years?

p.s. Don’t worry–I promise I will never quote a Barbra Streisand ever again.