When it comes to blog fodder, at one of the spectrum are sources like Forbes blogs, Fast Company, and Motley Fool, all of which occasionally publish stuff so crappy it just begs for Snarketing treatment.

At the other end of the spectrum is Callahan Associates, who I have a ton of respect for, and who I believe does great work. That view wasn’t changed last week when I sat in on Callahan’s quarterly review of credit union industry performance. Great data, great analysis.

Overall, Callahan painted a very optimistic picture of the credit union landscape–loan volume is growing, and market share is increasing in many areas and markets.

There were, however, a couple of slides that warrant further analysis and questioning–specifically those that related to the performance of credit unions by asset size.

Before we get into those slides, I’d like to state for the record that I’m not here to comment on the viability of small credit unions. I’m simply commenting on some data that Callahan presented and (respectfully) challenging their interpretation of the data.

The first slide that caught my eye contained data regarding credit unions’ 12-month loan growth, broken out by asset category. According to Callahan, the credit union, as a whole, grew loan by 10.3% in the 12 months ending September 2014. I’m assuming the data refers to dollar, and not unit, volume growth. 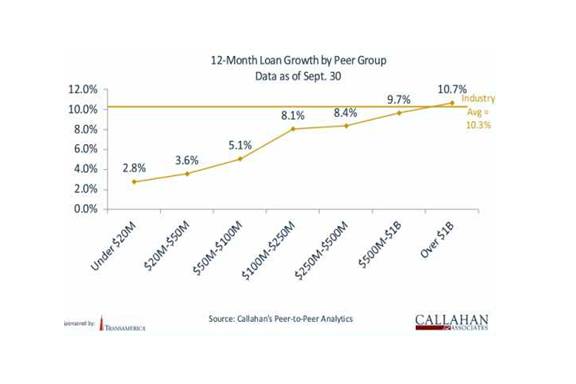 I may be missing something here, but I can’t understand how the tail–the small number of credit unions with more than $1b in assets–is wagging the dog. If the–what 150? 200?–$1b+ credit unions grew lending volume by 10.7%, and the thousands of <$500m CUs grew at 5.1% or less, then the $1b+ CUs must have an incredibly large percentage of the overall volume of loans.

Now, if it is true that the largest CUs have an incredibly large share of CU loan volume, then the next slide in Callahan’s deck–which was titled “Smaller credit unions are posting some extraordinary growth rates”–is misleading. 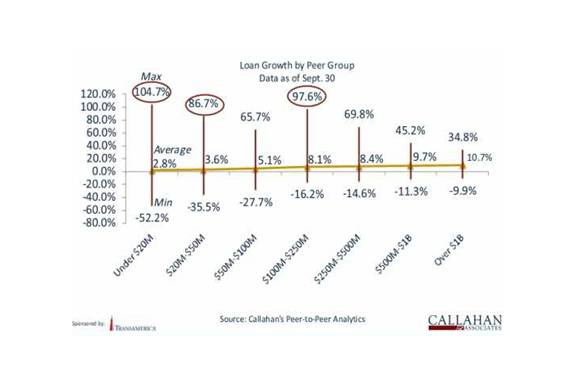 While it may be true that some small credit unions are posting “extraordinary” growth rates–like the one with less than $20m that grew loan volume by 104.7%–the reality is that the actual dollar volume must be incredibly small. And that the credit unions in each of the smaller peer groups with “extraordinary” gains are few and far between.

If I’m reading the Callahan data correctly, then, although the credit union industry as a whole may be doing well (in terms of loan volume and market share), that good health is not evenly distributed across asset groups.

And I just can’t buy in to Callahan’s attempt to spin the results as positive for smaller credit unions.

Is this evidence that small credit unions are doomed, and will disappear in the next few years? I don’t know. That’s for someone else to argue. I’m simply trying to make sense of Callahan’s data.