If you don’t know who Joe Pine is, shame on you. He wrote two of the best management books ever published, Mass Customization and The Experience Economy.

Along with my praise, however, comes a little critique.

He recently published a white paper titled Beyond Products and Services in Banking, in which he writes:

“No industry has more commoditized itself over the past three decades than banking. Banks pushed people out of branches to use automatic teller machines in order to reduce personnel costs. They pushed them out of branches – the one physical space where they could actually control the experience provided to customers – to use telephone response systems, again in a bid to save money. They pushed them out of branches and onto the Internet to further reduce transaction costs. That’s no way to create a lasting relationship.”

Joe goes on to describe how banks can (should?) move beyond commodities to services, experiences, and ultimately to transformations through customization (see chart below). 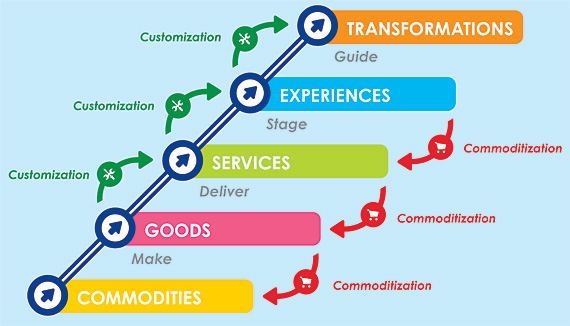 My take: There are some problems with Joe’s assertions. And although I know the construct of moving from commodities to services to transformations will appeal to many in the financial services industry, it’s not a doable path in today’s economy.

Let’s start by scrutinizing some of Joe’s statements:

“Banks pushed people out of branches to use automatic teller machines in order to reduce personnel costs.”

True to a certain extent, but the convenience of accessing an ATM at 11pm when branches have been long closed hardly makes ATMs the job-reducing villain that Joe makes them out to be (didn’t Pelosi use the same ridiculous logic recently, as well?).

“ATMs have expanded in number from 2,000 to 90,000 over the last 20 years, substantially increasing consumer convenience in the delivery of deposit services. The cost reductions expected to flow to banks from the substitution of ATMs for banking offices have not been realized.”

“They pushed them out of branches – the one physical space where they could actually control the experience provided to customers – to use telephone response systems, again in a bid to save money.”

Not to defend the IVR customer experience, but if all you wanted was your account balance, getting it from an IVR system sure beat getting dressed, getting in your car, driving to the branch, finding a parking spot, and waiting in line at the bank branch (just to have a teller inform you that you have $6.27 in your checking account)..

Another part of this statement might not hold water, either. Positioning the branch as the “one physical space where they could control the experience” is an odd statement. What other physical spaces were available to banks?

And why is “controlling the experience” so important?

Remove the word “physical” from that sentence, and then I have a real issue with it. I would argue that human-assisted interactions are less controllable than digital interactions. If banks wanted, or needed, to “control” the experience, than what better platform to do so than the Web where every interaction and transaction would be executed as designed?

“They pushed them out of branches and onto the Internet to further reduce transaction costs. That’s no way to create a lasting relationship.”

Summing up the “pushed out of branches” by concluding “that’s no way to create a lasting relationship” doesn’t cut it. Most of the research I’ve seen (and done myself) points to two factors causing short-term relationships: 1) Levying of fees, and 2) Poor service. Nobody gives “they made me use ATMs, the phone, and the Internet” as a reason for why they left their bank.

And “poor service” isn’t really about the superiority of branch service over the service provided in other channels. It’s about bank policies that customers perceive as unfair or disadvantageous to them.

Over the past 15 years, bankers have convinced themselves that banking has become a commodity business, so Joe’s white paper finds a very attentive audience.

The construct of how to “de-commoditize” banking by moving from commodities to services to experiences to transformations will certainly appeal to many bankers. And kudos to Joe for finding a way to even move beyond “experiences” which he, himself, was instrumental in making part of the business lexicon.

While it’s an appealing concept, it doesn’t work in real life.

To quote the white paper:

“Mass customizing a service can be a sure route to staging a positive experience. If you design a service that is so appropriate for each particular person, a service that is exactly what the customer wants and needs at this moment in time, then you cannot help but make him go “Wow!” and turn it into a memorable experience.”

What does that mean, “mass customizing” a service? Can you give me an example?

The reality of the banking industry (and I would be most other industries, as well) is that there is a finite number — and a small one at that — of ways to design a service.

The idea of designing a service for each particular person may be technologically feasible, but it ignores a few realities.

First, is that many consumers don’t know what they want or need, and can’t necessarily articulate those wants or needs. So designing a service to meet a non- or poorly-articulated need isn’t going to produce a “wow” experience.

Second, the banking industry is highly regulated. Even if a bank wanted to personalize the mortgage application for every individual customer, it can’t.

I can just see the headlines where some consumer claims discrimination because their mortgage application process was different from someone else’s.

Most importantly, however, Pine’s hierarchy fails because not all consumers need experiences or transformations.

The construct is akin to Maslow’s hierarchy of needs, with physiological needs at the bottom, and self-actualization at the top. Somehow, I don’t imagine the people living in the slums outside Rio de Janeiro as being particularly concerned with self-actualization.

In the US. some banking consumers may want or need “experiences” or “transformations,” but many are perfectly happy (given their life stage, income level, etc.) to receive “services.” And for many of the unbanked, a commodity banking product would do just fine, thank you.

Ironically, the idea of “customizing” each level of Pine’s hierarchy actually ignores the specific needs of consumers, and how banking consumers can be segmented.