So what’s the one key question? Simply: What are the future sources of revenue?

A bank can’t determine how many branches it should open/close, or how many people to let go, until it has a clear vision and strategy for how it’s going to generate revenue. Specifically, what (products and services), where (geographically), and from whom (customer segments).

Closing/opening branches and/or letting people go before developing that vision/strategy is pure stupidity, and the board should fire any CEO that does the former before the latter.

But I’m still not sure that a lot of banks are asking the right question.

As the article states, when it comes to future revenue sources, “many banks are pinning their hopes on commercial and industrial lending. At banks with $20 billion or less in assets, C&I loans grew 3% from the third quarter and 9% from a year earlier. Some banks have a rosier outlook on other types of loan growth; Regions Financial (RF) said last week that it is expecting single-digit growth in credit cards, indirect auto lending and C&I lending to upper middle market companies.”

Huh? C&I loans? I thought we were talking about retail banking?

Here’s the challenge that the majority of banks face in a nutshell: 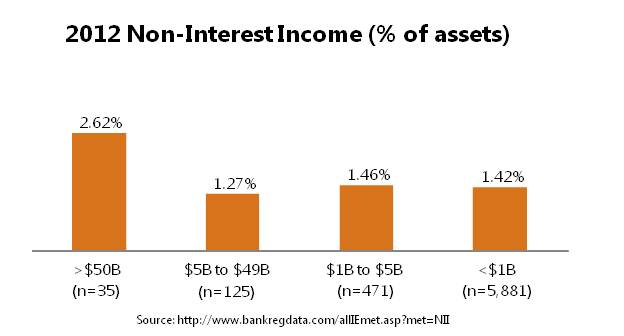 The majority of banks (and credit unions for that matter) aren’t generating enough revenue from enough non-interest sources of revenue.

Financial services execs are locked into a narrow view of what their sources of NII are.

In a study done by Filene Research Institute last year, three of the top five most important sources of NII to credit unions were checking account fees, mortgage closing costs, and out-of-network ATM fees. I can’t imagine that those aren’t in the top 5 list of bank execs, as well.

I know that there a lot of people in the industry who will say “mobile is the key to the future of banking” or that “innovation is crucial to the success of banking.”

As far as I’m concerned, mobile is nothing more than an access mechanism. Just one more way of connecting. If  banks and credit unions want to charge customers/members for accessing their accounts using a mobile device, good luck. That doesn’t add a lot of value to the product (account) itself, and I don’t many FIs will get far with that tactic.

The successful banks and credit unions of the future will be those that generate new sources of revenue that consumers are willing to pay for. Tacking on additional fees to existing products, or dreaming up new penalties or usage/inactivity fees is a dead end.

And if you don’t answer the question of what those sources of revenue are going to be, you’re going to end up closing a lot more branches, and firing a lot more people, than you thought you would.