Every once in a while I come across consumer research that reports a data point that I find astonishing, surprising, and, well….just too hard to swallow. I’d like to share one of those data points with you.

MarketingSherpa commissioned an online survey of a nationally representative sample of U.S. consumers, and asked them:

“In which of the following ways, if any, would you prefer to receive regular updates and promotions from companies that you are interested in doing business with? Please select all that apply.”

It’s 2016. Reportedly, more than eight in 10 mobile phone subscribers have a smartphone. Another source puts smartphone penetration at 57%, but that’s calculated on a base of 320.8 million people, which includes babies and toddlers. Now, I understand kids are getting smartphones at early ages these days, but including babies in the denominator seems a little extreme. So with the proliferation of smartphones, you’d expect that people would prefer to get updates and promotions from the companies they’re interested in doing business with (that part is important) through mobile apps, right?

But hold on. Pew Research Center says two-thirds of all adults are using at least one social networking site, so people would prefer to get updates and promotions from the companies they’re interested in doing business with through social media, right? 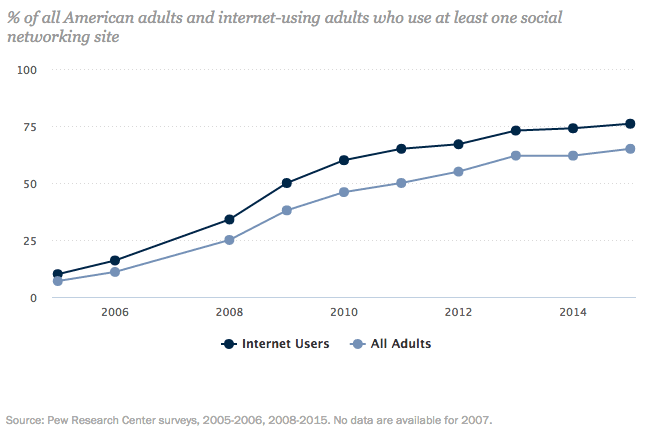 Nope. And “no” to the previous question, as well. According to MarketingSherpa’s research, more than half of US consumers would prefer to receive regular updates through… wait for it… the US mail. Snail mail. Thankfully (for the purpose of my sanity), roughly half of consumers said they’d prefer emails at a frequency they choose.

Despite the prevalence of smartphones, however, less than one in five consumers wants updates via text message or by downloading a mobile app. I can understand the lack of interest in text messages. But updates on a mobile app has got to have the highest convenience-to-intrusiveness ratio.

In other words, very convenient and not at all intrusive. Emails and text messages are intrusive. Updates sitting on a mobile app? Not intrusive at all.

Just one in five consumers wanted updates through social media (which actually works out to about 30% of adults who are actually on social media).

This result is likely dependent on which social media networks people use.

I can’t see getting updates and promotions through Twitter — way too much noise and nonsense in my Twitter stream. Truth be told, thanks to all the lunatics out there, I don’t even look at my Twitter stream anymore (I know what you’re thinking: I shouldn’t follow those lunatics. I don’t. Problem is, some of you normal lunatics retweet the annoying lunatics).

Maybe many of the one in five who prefer social media are thinking of Facebook, where they can easily visit their preferred companies’ pages.

This last point gets at the underlying difference in the update approaches that MarketingSherpa asked about: There are push approaches, and there are pull approaches.

Visiting a company’s web site, receiving at a physical store, and, to some extent, getting an update from a mobile app are pull.

The lessons to marketers are:

It would’ve been interesting to see the MarketingSherpa data cut by generation. Can’t help but wonder to what extent younger consumers prefer snail mail relative to older consumers.

And what’s with the nearly one in 10 consumers who said they’d prefer to receive updates and promotions by attending local events? What kind of events are we talking about here? I occasionally get invitations from financial planners who hold events at expensive restaurants. If that’s what we’re talking about, then I can definitely see how 10% of people want to get their updates that way.