In her Doofy Husband video, comedian Sarah Haskins informs us that:

“Being a woman isn’t easy. We work, we take care of the house, we raise children, and we do it all without a shred of help from those lumbering man-beasts known as husbands. Remember what he was like in commercials before he was a husband? Just a fun single dude, driving his awesome car or motorcycle, serving beer to babes, tailgating with his bros and dancing up a storm. He was so cool. Then he met you and got married—now he’s slightly dumber than a dog.”

OK, Sarah has a point there, but really, what was it about our ability to ride our motorcycles, drink beer, and hang out with the guys that made her think we’d be able to change diapers, clean the toilet, or know how to use kitchen appliances (beyond can openers)?

What she doesn’t mention — not surprisingly — is that it’s not our fault.

Let me explain: A woman doesn’t marry a man for who he is. She marries him for who she thinks she can turn him into. Show me a doofus husband, and I’ll show you a wife who just needs more time.

Sarah does, however, effectively point out the stereotypes perpetuated by many marketers.

Sometimes the stereotypes aren’t even explicit. I spent two hours on Kellogg’s PopTarts site this morning trying to figure out what to click: 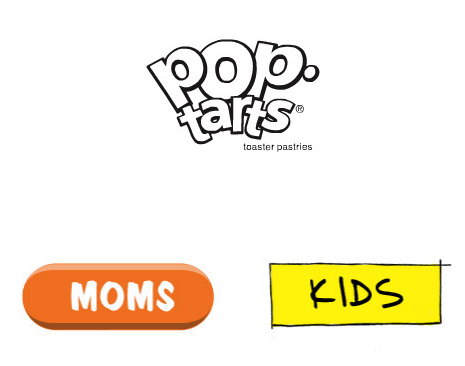 In all fairness, sometimes the stereotype is of women. We guys may be doofuses, but apparently we still make all the important financial decisions. The following picture is from the home page of a large investment brokerage:

Notice how the salesguy is shaking the man’s hand. Oh sure, when he’s done, he may very well go and greet the woman. But we don’t see that, so what message does this convey? That the man is the primary customer here.

I can’t even begin to tell you how many times my wife and I encounter this. Marketers talk about the influence that women have on purchase decisions, but when my wife and I sit down with sales people, more often than not they try to sell me, and not my wife. Don’t they know I’m just the doofus dad?