“Two years ago showrooming was something of a boogey-man for brick-and-mortar retailers. But shopping has changed since 2014, and while showrooming didn’t go away, it’s changed its form. Consumers are getting savier, and are now increasingly likely to browse for items online for price, and actually make the purchase in the store. The practice is called reverse showrooming, or webrooming, and some have been calling it the brick-and-mortar retailers’ secret weapon in 2014.”

My take: Wait, hold on…I’m still laughing too hard at this ridiculousness to write. OK, there, that’s better. Slapping a new word on an old behavior does not make it something new.

Let me ask you something: How do you think Google got to be worth a gazillion dollars? In large part, it’s because of one word: SEARCH. People discovered that finding stuff on the Internet was a lot easier if they used a search engine than if they…oh, I don’t know…tried typing out different URLs to see what worked and what didn’t.

Of the many things they searched for was…maybe you should sit down for this in case it comes as a shock…products they intended to purchase. People wanted information about products to help them make their decisions. One of the pieces of information they wanted was price.

I shouldn’t have to explain this, but apparently there are people out there (not readers of this blog, of course) who think webrooming is something new.

Although it doesn’t actually prove the prevalence of webrooming–because it didn’t capture channel behavior–a recent study from Insurance.com quantifies the amount of product research consumers do for a range of products/services, and the savings they achieve from their research. Or from their “webrooming” if you were born yesterday. 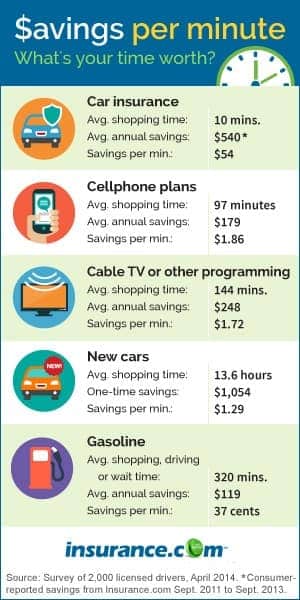 My take: It’s not very surprising that an insurance shopping site would find that shopping around for insurance would produce the highest savings per minute. But some of the findings regarding the amount of time consumers spend researching by product area are interesting–if they’re reliable, that is. The savings part of the equation is a bit suspect, in my opinion.

It’s a fairly straightforward process to calculate the annual savings on an annual car insurance policy. You paid $500 last year. You found a new policy for $450. You saved $50.

But how did consumers determine that they saved $1,054 when shopping for a new car? Is that $1,054 saved on the sticker price of the car? People aren’t that stupid, are they?

What I find more interesting in the study is consumers’ estimates of the time they say they’re willing to spend to find a better price.

Let’s do a little math here (just a little, because I know how it much it hurts for some of you to do this). According to Insurance.com, the average consumer who researches car insurance saves $54 for each of the 10 minutes they shop around. But consumers are willing to spend another 53 minutes to find better rates. That means consumers are leaving more than $2,800 on the table (53 times 54 equals 2862, in case you were wondering).

In other words–according to Insurance.com’s math–if consumers spent the full amount of time they were willing to invest in researching rates, they could save more than the cost of the policy.

The study also found that, in order to find better prices, consumers were willing to spend the following amount of time (in minutes) researching other product categories:

I’m also torn on how much time consumers would say they actually spent researching their checking account or credit card decisions.