Congrats to all involved with the Lending Club IPO. This is what it’s all about: Building something from scratch, enduring the ups and downs, then going public and making a boatload of money.

I’m no Wall Street analyst, so I couldn’t tell you if the ~$8.5 billion valuation that Lending Club (LC) hit at the end of its first day of trading is a fair assessment of its current or future value. But what I can tell you is that there are people who are deceiving themselves about what Lending Club is, and what its future prospects are. The delusions are reflected in articles like CNBC’s How LendingClub Aims To End Banking As We Know It, which states:

“LendingClub is setting out to transform the banking world. To get there, it’s following a playbook popularized by some of the world’s biggest tech companies. Any true comparison between LendingClub and the world’s most valuable tech companies is premature, of course.”

I guess any “true” comparisons between LendingClub and the world’s most valuable lending and investment providers aren’t comparisons worth making, eh?

My take: The conditions which made Lending Club possible and got it this far are temporal and likely to change in the next few years–to LC’s detriment.

First of all, can’t somebody out there come up with a better term for what Lending Club is than calling it a “peer-to-peer” lender? The institutional investors providing funds on the marketplace are anything but “peers” to the people looking to borrow money on the site.

There are two conditions that have enabled Lending Club to exist and prosper (get it?). The first is a pool of investors that would like to get a better return on their available capital than what they can get from other (i.e., existing) investment alternatives.

The size of these two pools–and their willingness to use Lending Club to meet their needs–have been sufficiently large, and growing over the past few years to fuel Lending Club’s growth and drive the IPO.

The questions to answer are: 1) Why did these pools grow over the past few years? 2) Will they continue to grow in the future?

The investor pool grew largely because of two reasons: 1) incredibly low interest rates, making it hard to find acceptable returns, and 2) even in the face of an increasing DJIA, professional money managers are always looking for superior returns to outshine the competition.

Why did the borrower pool grow? Because the economy sucked, and, to some extent, because some  (many?) individuals are mismanaging their financial lives–many are, or have been, unable to pay off existing loans and credit card balances. In fact, 83%of Lending Club borrowers report using their LC loans to refinance existing loans or pay off their credit cards. 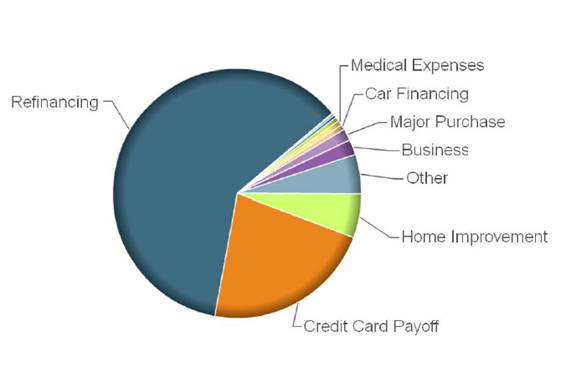 So what happens going forward? It mostly depends on the state of the economy, the direction that interest rates go in, and the P2P lending market itself.

If we experience a period of economic prosperity, and people are more able to pay off their loans and credit cards, Lending Club may very well see a steep drop in loan volume. Roughly 62% of Lending Club’s 2014 loan volume came from borrowers with a Grade C or lower rating. What happens when the economy improves and the Gen Y population–who start off adult life with lower credit scores and grades–mature and move into higher creditworthiness classes? Is there another pool of risky borrowers to fill the void? And if interest rates rise, could the rates that borrowers must pay on the LC platform might be even too high for them to stomach? Grades E, F, and G are already paying interest rates in excess of 20%. We’re getting close to payday lending territory, no?

Will the investor pool grow? This is comprised of two components: 1) the number of investors, and 2) the amount of funds those investors put into the marketplace. I can’t talk to #2, but it seems likely there are limitations to the number of investors who can or will participate in LC. As the marketplace has grown, competition to fund the best borrowing opportunities has grown, and has even spawned new companies who help investors identify their best opportunities. As a result–much like the stock market itself–professional investors have an edge over individual, amateur investors. As a result, the number of individuals investing in LC will likely remain capped.

And with a first day valuation of $8.5 billion, I’m guessing that venture capitalists across Silicon Valley are firing up their bongs and thinking “Dude! I gotta invest in one of these pee-pee lending marketplaces!” And that means more competition for Lending Club. Increased competition will likely result in some erosion of LC’s overall share.

Claims that Lending Club is “disruptive” or that it will “end banking as we know it” are so totally ridiculous that it has to make you wonder what the claimants were smoking when they made these claims. Lending Club is a niche player in the lending market, a fringe player.

Disruption? Ending banking as we know it? Hardly. More like creating a niche somewhere between credit card borrowing and payday lending.

Bottom line: I can’t tell if you $8.5 billion is a fair valuation for Lending Club. What I can tell you is that, if and when the economy improves, it’s going to face some stiff challenges.

That said, I would love to have a ride on the boat.