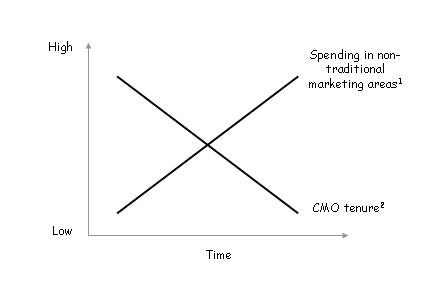 “Spending on social media and conversational marketing will outpace that of traditional marketing by 2012, according to a new study conducted by TWI Surveys, Inc. on behalf of the Society for New Communications Research.” (Source: PR Newswire)

“The tenure for CMOs at the 100 top consumer branded companies has continued to decline, according to a study from executive search firm Spencer Stuart.” (Source: Brandweek)

My take: I’m not saying that the increased spending in the non-traditional marketing areas is in and of itself wrong. But what it does suggest to me is that marketers (and CMOs, in particular) aren’t doing a sufficiently good job of internally justifying that increased spending to other senior execs in their firms.

I can imagine the [closed-door] conversation between the CFO and CEO:

CFO: Marketing wants to increase its budget for word-of-mouth and viral marketing by nearly 40%.

CEO: What the hell is word-of-mouth and viral marketing?

CFO: I have no idea. I’ve asked for some ROI projections and business justification for this, but all I’ve seen so far are projections for increased Web activity and improved brand equity measures.

CEO: [shakes his head in disbelief].

The “accountability” issue in marketing isn’t simply about ROI. It’s about justification and business logic. CEOs and CFOs want to know that there’s a rationale for the spending. And in many firms, it doesn’t like like the CMO is giving that to them.