How profitable are checking accounts?

There are a lot of differing opinions about that question, but I will give you the one correct answer: It depends.

American Banker recently reported on a study which found:

But, as the article states, the costs to maintain checking accounts can vary widely across institutions of various sizes:

“For the largest banks with assets greater than $50 billion, the average checking account costs between $350 and $450 a year. Overhead, or the institutional costs not associated with a specific division or service, is what weighs down some of the largest banks, making it more difficult to cut costs.”

This raises a problem (or two). Allocating overhead costs can be a very inaccurate science (a point that was brought up to me by Jim Marous in some DMs this week). It seems unlikely to me that an activity-based costing approach was used to allocate those overhead costs.

And it also seems likely to me that large banks — by virtue of having a broader product line than smaller banks and credit unions — will have more overhead (i.e., “institutional” in the language of the article) costs to allocate in the first place.

And, in fact, the study indicates that “for some of the smaller banks with less than $5 billion in assets, the costs are much lower — around $175 to $250 a year.” At the lower cost level (and assuming the same revenue), that would make the checking accounts profitable.

This is consistent with the findings of a study Aite Group conducted.

There are, however, some nuances that are different in my study than the one reflected in the one cited by American Banker.

The most important difference is that the cost differential between big banks and smaller FIs — and, in fact, even across smaller FIs  — isn’t necessarily due to differences in allocated overhead costs. The differences can come from lower cost to serve.

In addition, profitability is driven not just by a lower cost to serve, but by revenue — which can be generated by interchange, cross-sell, and from the use of deposits for revenue-generating purposes (e.g., lending).

The Aite Group study is not necessarily representative of the overall market. With the help of Bancvue, we compared the performance of high-yield checking accounts (which are, technically speaking, “free” checking accounts) to non-interest bearing accounts (the more typical definition of “free” accounts) across 120 financial institutions (predominantly credit unions and community banks) from May 2009 through April 2011.

The drivers of the higher level of profitability weren’t necessarily lower overhead costs, but lower operational and support costs — driven by online banking and e-statement adoption — and higher revenue produced by higher levels of interchange and asset deployment. Even with the associated interest payments, the high-yield accounts were more profitable. 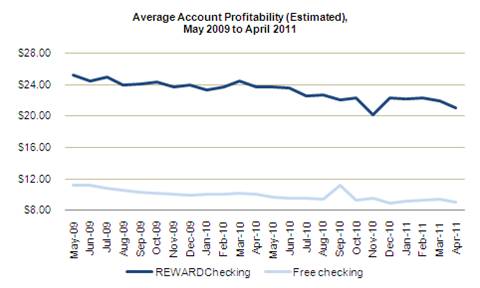 The American Banker article claims that:

“The issue comes down to efficiency and economies of scale. The banks likely to fare best are those that are big enough to support a sizeable base of checking account customers, but which are not loaded down with ancillary costs.”

My take: I disagree. The FIs (banks or credit unions) that are likely to fare best are those that actively manage account holders’ behavior by creating incentives and disincentives for profitable behavior, and that make profitable use of deposits.

For a copy of the report, visit the Bancvue web site.