A few years ago, Bank of America publicized an internal study they did in which they determined that online bill payers had a higher retention rate, grew account balances, and had a greater increase in number of products owned after they started paying bills online, compared to similar customers who didn’t pay bills online.

My take: I’ve never been convinced of the causal relationship between online bill pay and relationship depth.

I’m not impugning the BofA study, nor the importance of online bill pay, but proponents of the forementioned premise have never been able to articulate why online bill pay drives relationship strength.

A research report I recently published at Aite Group, has helped me form some new opinions about what’s going on here.

We surveyed 23 of the 80 largest US banks about their online efforts and plans, and asked them if they had seen any impact on retention, number of products owned, and deposit balances among their online bill pay customers. The result: Some did, some didn’t — but larger banks were more likely to have reaped an economic benefit from OL bill pay than smaller banks.

So, wait — if online bill pay is such a driver of relationship strength, why wouldn’t banks see the impact, regardless of their size? Because there’s another factor in play: Online marketing capabilities.

Across our sample, we found another significant between the largest banks and other firms: The set of online marketing capabilities that they have developed.

As shown in the figure below, the larger banks are more likely to have invested in, and developed a range of online marketing capabilities, including using marketing technologies to cross-sell/up-sell, the ability to make special, pre-approved offers to online customers, and targeting banner ads to online customers. 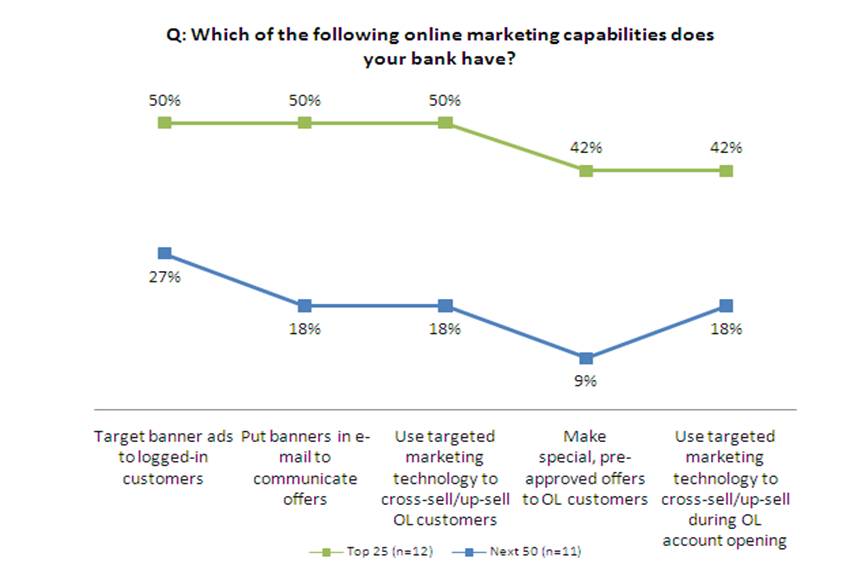 Bottom line: Online bill pay, by itself, is insufficient to drive economic benefits like balance growth and product ownership. Online bill pay creates opportunities for banks to make relevant offers to their customers, but it isn’t the cause of deepened relationships.