A leading consulting firm surveyed banking consumers to find out what they wanted, and discovered that “the vast majority considered responsive customer service, competitive pricing, convenient branch locations, online banking offerings, and convenient branch hours to be either important or very important.” 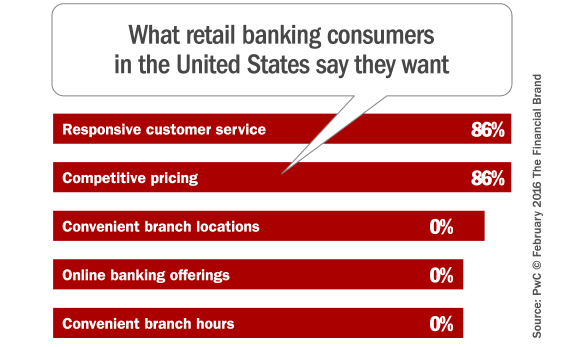 What a useless list. When have you ever heard a banker say “we don’t need to worry about pricing our services competitively or having convenient branch locations and hours because nobody thinks that’s important”?

The problem with the list is two-fold: Providing all of the five things doesn’t guarantee a bank’s success, and a bank could fall short on one (or more) of those attributes and still be wildly successful. In fact, the research found that “at least 75% of those surveyed described themselves as satisfied or very satisfied with the banks’ customer service, and branch hours and locations.” That says two things:

Other consultants would argue that what matters is not what consumers want, but how they feel. One firm in particular has attempted to popularize the following construct, looking at “likelihood to annoy” versus “likelihood to delight.” 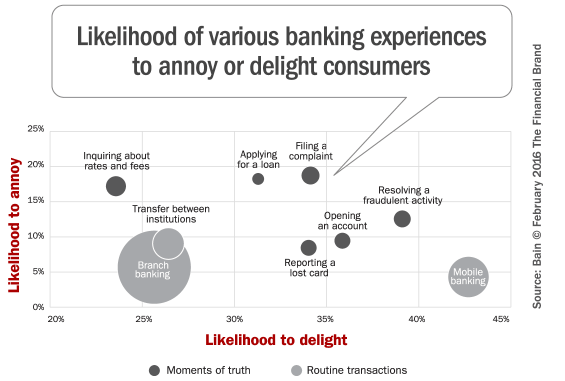 The second part of that statement is the real issue. How many consumers, in a given year, apply for a loan, report fraudulent activity, or file a complaint? The percentage of those who do the first two things are pretty low. And if “at least 75% of those surveyed described themselves as satisfied or very satisfied with the banks’ customer service,” then it’s likely that not a lot of people are filing complaints.

I have no idea if the first consulting firm cited above asked consumers in its survey how important it was to lodge a complaint, apply for a loan, or report fraudulent activity. If it did, the percentage of respondents who said those things were important couldn’t have been as high as it was for the five things listed in the chart above. Yet, the five things listed in the chart aren’t the “moments of truth” that annoy or delight.

This leads us to the question at hand: Does it really matter what consumers say they want?

The answer is no. What people say they want is (or can be) shaped by how we ask what they want, and people don’t always know what they want if they haven’t been in a particular type of situation.

Apple didn’t develop the iPod, iPad, and iPhone based on surveys of what consumers said they wanted. Those products were developed (or shaped) by visions of what could be possible.

The lack of vision in the banking world is a far bigger issue than the “lack of innovation” that so many people in the industry rant about. Fintech startups won’t “disrupt” banks because they’re “digital.” If it happens, it will be because they’ll build and deliver new products, service, and features based on their vision of what could be.

Yet, traditional bank and credit union execs default — like a conditioned reflex — to not making decisions without first asking “what do our customers want?” If they don’t have the answer at hand, they go off and conduct research. That takes months to design the survey, field the survey, and then analyze the results.

And this research produces what? A list that says “the vast majority of people we asked considered a bunch of features to be ‘important’ or ‘very important.'”

Bottom Line: Stop asking what consumers want, and start developing your financial institution’s own vision for how you will differentiate yourself and succeed in banking.