I’ve been conducting consumer research in banking for a number of years now, and while it’s certainly debatable whether I’ve learned anything or not, I would argue that I have learned one thing: There IS such a thing as a stupid question when it comes to market research.

Especially in the field of banking.

In general, stupid research questions include those that pose false dichotomies or tradeoffs–like “What’s more painful? a) Going to a bank branch, or b) Sticking needles in your eyes.” Don’t be surprised if 72% of survey respondents choose the first option. I’d like to stick needles in those people’s eyes…just to teach them to not give stupid answers when completing a survey.

Here’s another example of a stupid research question:”Who would you trust more as president? a) Barack Obama, or b) Ron’s grandmother.” I’m pretty sure 98% of Republicans would choose my grandmother, ignoring the fact that she passed away 20 years ago.

There are (at least) two problems here, although they are interrelated:

It’s kind of funny that Google would generate such high opinion ratings. How many times have they failed to launch a mobile wallet? And how many of their other initiatives have gone down in flames? Let’s see, there was Google Wave, and…a bunch of others.

I’m not trying to bash Google here, because their approach to experimentation regarding new services is laudable. The point is that the company isn’t perfect, which of course, goes without saying.

But are we so inanely stupid as to think that it’s easy for any company with a good reputation in one industry to move into others? (Granted, there are some that do it–e.g., Virgin–but they are few and far between)

You might be answering, “no, we’re not that stupid.” But some of us must be, or why else why Forbes conduct research like this?

Here’s another reason why this is stupid research: Opinion may have little to do with intention to do business.

Accenture conducted a study not long ago, and asked North Americans (that’s Americans and Canadians, for the geographically uninformed) how likely they would be to use a variety of firms for their banking needs. 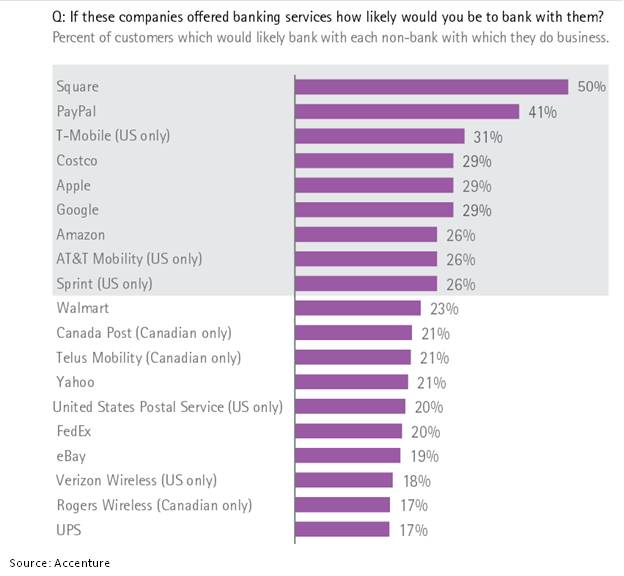 Although nearly three-quarters of consumers told Forbes they have a positive view of PayPal as a provider of financial services, only four in 10 consumers told Accenture they would actually be likely to bank with the firm.

Seven in 10 respondents told Forbes they had a positive view of Amazon as a provider of financial services, yet only about a quarter said they would be likely to use the firm for banking. And if so few Amazon customers are getting a smartphone from Amazon, why would even a quarter of consumers be willing to bank with the company?