A recent Forbes article, written by the founder of a fintech startup, listed three reasons why fintech is supposedly failing:

If fintech is failing, these aren’t the reasons. My counter-arguments:

It is true, however, that incumbents are powerful and resistant to change. But that’s not a reason why fintech is supposedly failing — it’s the reason why fintech startups have an opportunity to succeed. If powerful, large banks weren’t resistant to change, they would have already developed and deployed whatever it is fintech startups are working on.

The Real Reasons Why Fintech is Failing

There are other reasons why fintech is failing — or better yet, why certain segments of fintech are failing (in the US, at least).

Neobanks (sometimes referred to as challenger banks)  have not gained much traction in the US. Simple is often considered one of the first neobanks on the scene. It would be hard to consider the firm’s market performance a rousing success, let alone disruptive. The question to address is “Why?”

The answers should be of interest to the fintech entrepreneur who wrote the Forbes article cited above. To move an established and entrenched marketplace like banking, a fintech startup needs to come to market with a step-function improvement in:

Viewed through these lens, if certain fintech startups are failing then it’s their own fault for not focusing on specific and well-defined opportunities — and not because of the reasons listed in the Forbes article.

And when viewed through these lens, it seems clear (to me, at least) that the big opportunity for fintech is not directly with consumers, but with the incumbent financial institutions themselves. The incumbents are the ones most in need of added convenience, cost reduction, and higher performance.

What is happening is that fintech isn’t living up to the hype.

Early talk of disruption, displacement, and dinosaurs becoming extinct made for great press, but didn’t pan out.

There are measures of fintech success other than the failure of incumbents, e.g., the incumbent’s investments in fintech startups, and/or the importance of fintech in incumbents’ strategic planning efforts.

According to CB Insights, since 2012, the top ten US banks by assets under management have participated in 72 rounds totaling $3.6B to 56 fintech companies. Five of the top retail banks in the US have done 19 deals in the past year alone (see the chart below). This doesn’t include non-investing initiatives the banks have entered into with fintech startups. 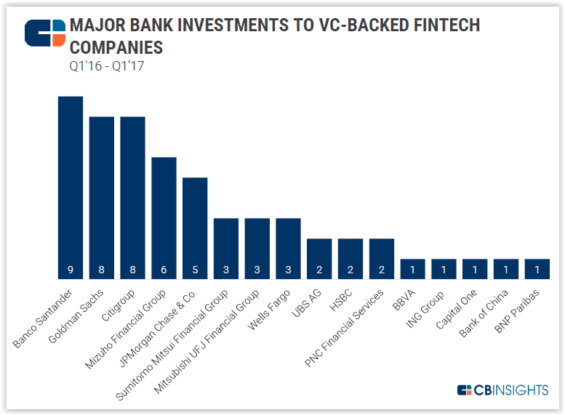 In addition to the investments that the largest banks have made, another sign of success is the degree to which fintech has become as a strategic planning topic among banks and credit unions of every size.

Some people may think banks and credit unions are ignoring or are blind to fintech threats and opportunities, but that’s not what my colleagues and I find among the mid-sized financial institutions we work with every year.

Looking Past the Perfect Storm

What’s happening to fintech is that the “perfect storm” is abating. Early fintech startups benefited from a “perfect storm” — an unprecedented convergence of four forces:

Fast forward to 2017, and here’s what fintech startups are facing:

Maybe Fintech is a B2B, not B2C, Business

Bottom line: Fintech — as a set of startups or a class of technology — is hardly failing.

If individual startups are failing, it’s likely due more to business model shortcomings than to the reasons listed by the author of the Forbes article.

For all the talk of partnerships and investments, the reality of the fintech market (in the US, at least) is that incumbent banks may very well be fintech startups’ best prospects, not their competitors.

In any case, fintech startups would be wise to ignore the ‘fintech is failing’ nonsense.