The CFPB says that FIs spend US$17 billion on marketing and that just US$671 million, or about US$2 per person, is spent on financial education.

And like uncritical, brain-dead slugs, many of you don’t just believe this, but tweet it, implying that the spending is out-of-whack.

My take: Comparisons of financial education spending to FI marketing spend are spurious, and belie the facts about financial literacy and what really needs to be done about it.

First of all, who’s to say that FI marketing isn’t educational?

If a bank’s or credit union’s marketing efforts inform consumers about the choices they have, and how to choose one FI over another, couldn’t it be argued that that’s “financial education”?

Second, there’s no relationship between what FIs spend on marketing and what the country spends on financial education.

Instead of comparing financial education spending to FI marketing, why didn’t the CFPB compare it to Obama administration’s programs that spends US$500 million — roughly US$24 per child between the ages of 0 and 5 — to help kids sit still in kindergarten?

What’s more important? Getting 5 year-old kids to sit still for the three hours they’re in school, or preparing kids and adults of all ages to make smart financial decisions?

We have a literacy problem in this country. 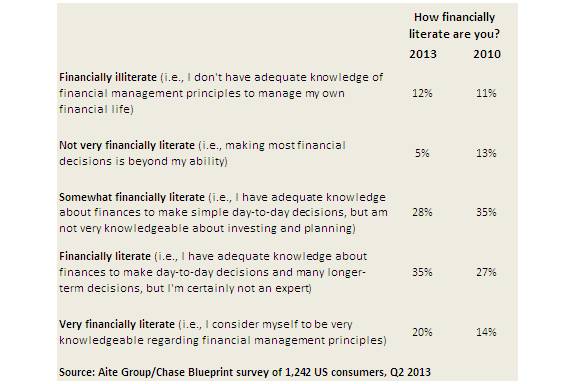 For those of you mathematically challenged, 17% is a minority. Less than one in five Americans consider themselves to be financially illiterate. 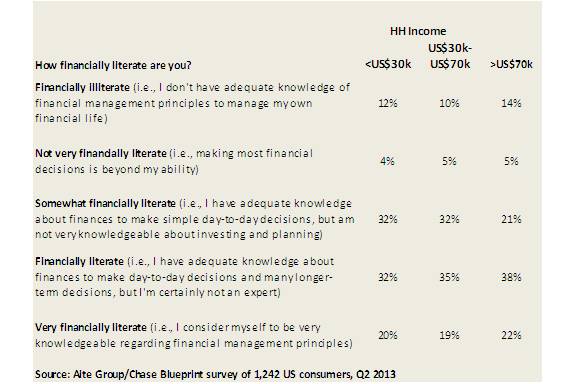 So much for that misconception.

This isn’t to say that it’s all a bed of roses. Just 20% of consumers consider themselves to be “very” financial literate (also, without much difference between income levels).

The decline in illiteracy, and the increase in the percentage of consumers that consider themselves to be very financially literate (up from 14% in 2010 to 20% in 2013), suggests that the investment in financial literacy is working.

Could it work better? Sure.

Would spending more money on financial education be a wise investment? I wouldn’t argue that it wouldn’t be.

How much more should be spent? And where should that money come from? Ahh, now there’s the rub. These are the questions that don’t have any easy answer.

By that logic, General Motors should invest in sending us to driver’s education, right?

This challenges our government’s thick-headed notion that we have to spend money on something for it to improve.

We wouldn’t have to spend another penny on financial education to improve literacy levels, if more parents spent more time (or even some time) on teaching their kids some financial basics.

And for adults, it’s more a matter of priority.

Neither my wife or I ever received any formal (or even informal) financial education. But I’m probably at the “literate” level and my wife is at the “very literate” level.

How did she get there? She took the initiative to learn. All self-taught.Neither the government nor some FI had to spend money teaching her.

Bottom line: The key to improving financial literacy is not spending more government money, or making FIs foot the bill. It starts in the home. And it requires us to hold our government a little more accountable for how it spends its money.