“We wanted Member Value Statements to make personal, specific and relevant comparisons for people, rather than produce pithy stats that are good soundbites for a newsletter. We decided to make ours so that it would show members all their relationships with their credit union—all of their deposit and loan products—then compare them with the top 15 or 20 banks in that credit union’s specific footprint.”

My take: That’s what I’m talking about!

When I talk about “competing on performance,” that is. In a previous post here titled Competing On Performance, I wrote:

“The next wave of banking competition is competing on performance. That is, who best helps the customer manage and improve their financial lives—and not who has the best rates or fees, or who claims to have the best service.” 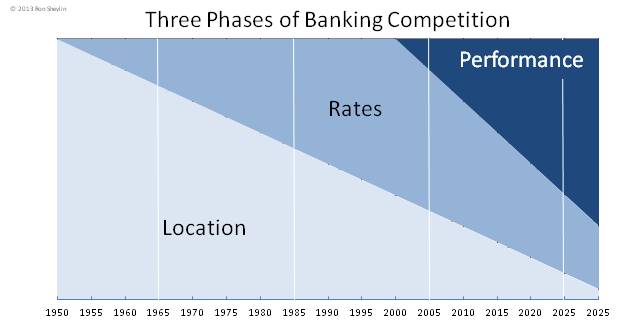 Although I still believe we need a single score–a Finscore–to capture our financial health, Marquis’ MVS is a great step towards changing how FIs approach marketing. It isn’t enough for FIs to tell consumers “we will be the best FI for you”–they have to show consumers that they have been and will continue to be the best FI for consumers.

In other words, marketing doesn’t end at the sale. That might seem obvious, since every FI cross-sells their customers and members (to death). But pushing additional products and services does little to help customers confirm that they made the right decision when they selected an account from that FI.

While I love the MVS concept, there are some elements of Marquis’ approach that I would change (so what else is new?):

1) Comparison points. Marquis recommends against including other credit union in the comparison, because, according to Rizzo, “when I look at market share and penetration numbers across product categories, credit unions—while important—are not a significant force in most markets. And besides, credit unions don’t usually turn on one another.”

I disagree. This is about the members (or, if a bank was doing this, its customers). Not about the “let’s all hold hands and bash the bank” attitude too prevalent in credit union land. If a credit union’s members had to choose between other credit union when selecting an account from the chosen CU, those credit unions should be included in the comparison.

2) Channel deployment. Marquis says that “with data and postage and printing, you should figure about $1.5 per member, per project” to send out MVS. As long as we’re talking averages, the “average” credit union has somewhere around 15,000 members, so sending out MVS would cost Average CU less than $25k.

I’m not looking to take away any revenue opportunities from Marquis, but FIs should be able to avoid the mailing cost by posting a quarterly MVS to the online and mobile banking platforms. Nothing wrong with sending a paper MVS, but given the cost of postage and printing, FIs would get more bang for their buck with more frequent communication of the value statements.

But FIs should use this concept to create MemberSHIP value statements. That is, at the macro- level, how have all members of the CUs performed? This would likely have to presented in percentages and ranges, as in, XX% of the CU’s members saved between $Y and $Z in 2013, versus what they would’ve spent/saved/earned if they had chosen a different FI.

Granted, this would be harder to compute, but that’s what “competing on performance” is all about.

4) ROI. Marquis says that credit unions that have executed the program have received a minimum of three times their investment back in terms of net profit. Smart Financial CU says they “can’t say they’ve received that kind of ROI quite yet” and Wright-Patt says it was able to attribute approximately $50 million in new relationships as a result of the project.

I’m having trouble with some of these numbers. Three times their investment in terms of net profit? How do you know what the net profit of a particular account really is? $50 million in new relationships? I thought these statements went out to existing members? Where did the new relationships come from? And what does the $50 million number mean? Is that 10 $5 million mortgages?

I understand the need to demonstrate ROI on marketing investments. But if the CMO has to justify every friggin’ marketing expense in terms of ROI, that CMO has a bigger problem (namely, no confidence among the executive team in marketing).

MVS represents a new approach to marketing an FI’s products and services, and how it communicates value to its members/customers. My suggestion to FIs looking to deploy MVS is to run a test. Define two sets of members: a test group and a control group. The two groups should look as similar as possible in as many dimensions as possible, but especially tenure, number of products currently owned, balances, and demographics.

Then, send out MVS to the test group–both paper statements as well as online delivery–but suppress other marketing messages. Continue to market as usual to the control group. I don’t know how the CUs currently sending out MVS define their tracking period, but I think you need to give this test at least a year.

After four quarters of tracking the impact of MVS, the true return on the investment–as well as the return on the new approach to marketing–should be more apparent.