Each year, there seems to be no shortage of well-publicized surveys showing how much trust consumers have in banks, and how that trust has changed since the previous survey. What is it about the banking industry that makes bankers obsess over whether or not their customers trust them? You’d think that brain surgeons would be as concerned with their patients’ level of trust in them, but noooo.

A recent Harris poll (as reported in The Financial Brand) found that:

“Local credit unions and local/community banks are the most trusted institutions, with over three-quarters of Americans having some or a great deal of trust in them. Big national banks rank second to last, having the trust of only 50% of Americans….while 42% state they have no trust at all or very little trust in these institutions. Online-only banks are seen as the least trustworthy, with only 39% of Americans having at least some trust and 47% having no or very little trust in them.”

With these data points in hand, credit unions go into full-on Sally Field mode: “They like us! They really like us!”

A lot of good it does, though. According the BusinessWeek’s estimates, the top 3 banks in the country have 33% market share, with the top 10 banks holding nearly 50%. And those market shares appear to have grown over the past few years. Despite low levels of consumer trust.

How can credit unions be the most trusted if nobody knows about them?

Harris also found that online-only banks are the least trustworthy. REALLY? How would consumers know that? What percentage of the population has actually done business with an online-only bank? (I don’t know. It’s a serious question).

I can’t imagine that it’s a particular large percentage. Yet some researcher thinks it’s OK to ask consumers about their trust in something those consumers have no experience with, and to publish the results as if it were gospel.

According to the Harris poll, half of US adults say their trust in banks has declined over the past few years. 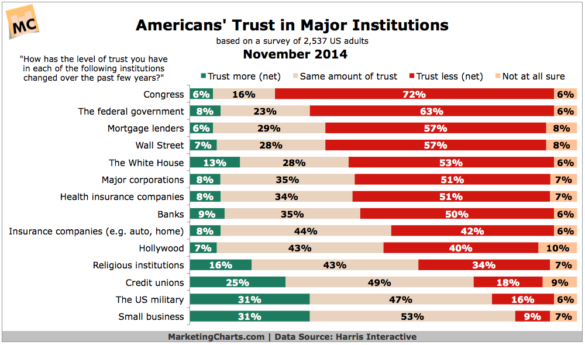 According to Edelman’s trust survey, which they conduct annually, 38% of Americans trusted banks in 2009. In 2014, that percentage increased to 46%. By the way, as a point of comparison, 48% of Americans’ said they trusted “businesses in general,” so the level of trust in banks isn’t too far out of line. 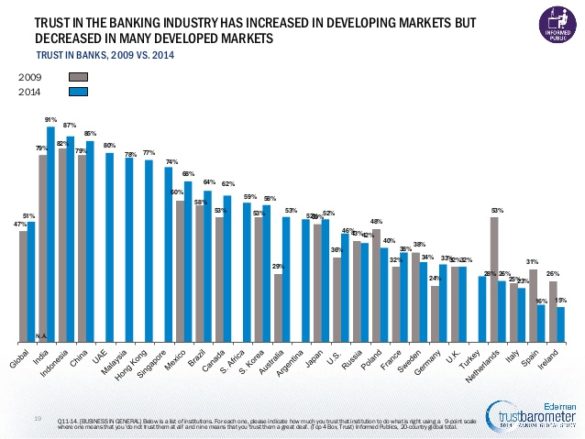 So, is trust in banks increasing or declining? The answer is: Whatever you want it to be.

I might not be comparing apples to apples with the Harris and Edelman studies.

Harris appears to capture the “change in a consumer’s level of trust” while Edelman is reporting the change in the “overall percentage of consumers” that trust banks. It’s conceivable that there are a lot of people who a few years ago said they had “very little” trust in banks, and today said they have “no” trust, which, of course, would be a declining level of trust.

This raises questions I don’t hear a lot of people asking: What does it really mean to have a “great deal,” “some,” “very little,” and “no” level of trust?  Is your definition of “great deal” of trust the same as mine? Is trust a “bucket” which we can accurately measure how filled it is?

Bottom line: If the trust survey data tell a story that supports your financial institution, please don’t let my comments–or any modicum of common sense–get in your way of using the data to your advantage. That’s what quantipulation is all about!

But please don’t deceive yourself into thinking that the findings from these studies have any correlation to who consumers bank with, or how they make their decisions about who to do business with.