In my personal life, I’m not a hunter, but I have nothing against them. As long as you’re not the Vice President of the United States, and not shooting your friends on hunting trips, I don’t care what you do.

But in my business life, I do like to go hunting. For fakes, phonies, scam artists, and generally anybody else with serious delusions about the way business works. Over the past few years, I’ve found a new target to hunt for: The (not so) elusive BigDataDoofus.

BigDataDoofuses have multiplied like rabbits in the past few years (I think that many of them could be the offspring of a species of animals known as SocialMediaMorons). They roam the blogosphere and social media channels, dropping little BigDataPoops all over the place. Like:

Or how about that article, published on LinkedIn, titled The Story of the Way Big Data Shaped World War II? Man, that was a stinky one!

A white paper from 1010 Data, titled 2013 Big Data in Business Study, caught my attention. White papers like these are great hunting grounds for BigDataDoofuses. I think I found me some there.

The author(s) of the study surveyed 158 executives and asked them ““Which industries, if any, will see the most success with Big Data by the end of 2013?” 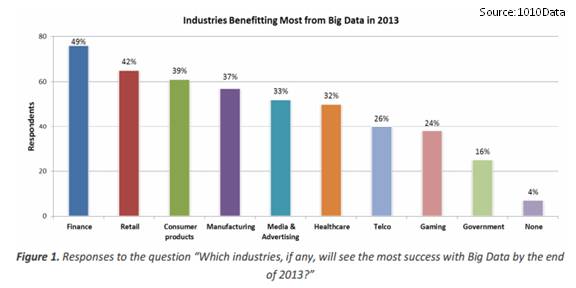 Were the respondents right? I have no idea how anybody could possibly say yes or no. What does “Big Data success” mean?

The next question asked of the survey respondents is even more incredulous: “When, if at all, do you think Big Data will reach its potential in the business world?”

As the white paper puts it:

“An overwhelming majority of technology executives (79%) believe that Big Data will reach its potential in the next one to five years. A smaller proportion (12%) believe Big Data has already reached its full potential.” 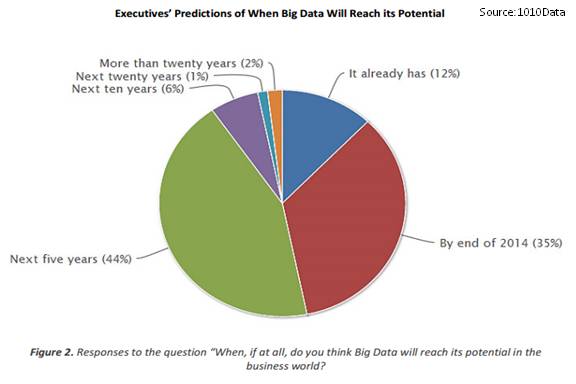 How can anyone answer the question posed in the survey without clarifying what Big Data’s potential is?

To the 12% that believe Big Data has already reached its full potential: What exactly has been achieved that makes you conclude this?

Personally, I don’t think the 12% necessarily have it wrong. It’s quite possible that Big Data’s “potential” is so limited that that potential has already been reached.

More than a third–35% to be exact–of respondents said Big Data’s potential will be reached by the end of 2014.

If Big Data’s potential is, as described in the quote above, “find cures for cancer, accurately predict human behavior, foil terrorist attacks, prevent diseases,” then the 35% of executives who think this potential will be reached by the end of 2014 are BigDataDoofuses.

Roughly half of the respondents to this survey said that the reason that companies are holding out on using Big Data is that they “need better time to value for Big Data” and “need simplified solutions for Big Data with fewer moving parts.”

I don’t even understand what that first answer means. “Better time to value”? What is that?

And to the 35% that think Big Data will reach its potential by the end of 2014: If companies are holding out on using Big Data, how can Big Data’s potential be reached so soon?

The only reasonable answer to that is that Big Data’s potential is very limited.

The great thing about being a BigDataDoofus hunter is that, for now at least, they’re anything but a rare breed. If we’re lucky, though, they will become an extinct species.