Conventional wisdom holds that women make the lion’s share of financial decisions in US households. While I don’t believe that “marketing to women” (as a homogeneous, undifferentiated segment) is a particularly good idea, I do support the conventional wisdom.

Another widely held belief is that social media is — or will be — a powerful marketing channel for financial institutions (if I have to find you links to demonstrate this, you’re even lazier than I am). Although I think this view is more debatable than the view on women’s influence, I’m willing to roll with it for the purpose of this post.

Taking these two views together yields a problem for financial institutions. Specifically, a gender problem.

According to research recently conducted by Aite Group, the majority of consumers that connect to their bank or credit union through social media are men, not women. 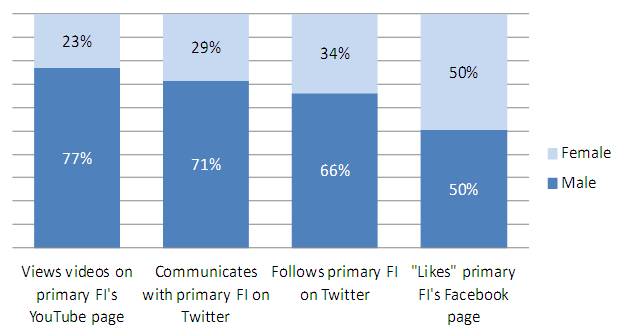 It’s bad enough (if you’re a believer in the marketing power of social media) that so few consumers connect to their FIs through social media — 11% have “liked” their FI’s Facebook page, 6% follow their FI on Twitter, and 4% view their FI’s YouTube videos. But, of those that do, most are men.

This means, of course, that FIs’ primary target — women — aren’t connecting with their FIs through social media. Among men, 9% follow their primary FI on Twitter compared to 4% of women. Six percent of men view FIs’ YouTube video, while just 2% of women do so. There’s a little more parity regarding Facebook: 12% of men versus 10% of women.

In the broader context of the social media world, this is surprising. According to Digital Flash NYC:

“Women dominate both Facebook and Twitter, making up 58% and 64% of their memberships, respectively. Women use social media more frequently, with 18% of women updating their Facebook status on a daily basis, compared to 11% of men. On a monthly basis, women make 99 million more visits to social media sites than men; they’re also more likely to comment on posts and photos several times a day.”

The big question here is: Why aren’t more women connecting to their FIs through social media, in light of the fact that they dominate the financial decision-making in so many households?

My take: The answer to the question is: What women find on FIs’ social media sites and pages aren’t of interest to them, and/or not helpful to them.  (I’m open to other hypotheses if you’ve got them).

I guess news of branch openings on Facebook pages just doesn’t engage women who make financial decisions. And maybe women just don’t care about those amateurish videos bashing big banks that so many credit unions love to post on YouTube.

Bottom line: If banks and credit unions want to use social media to improve their marketing efforts — and believe (as they should) that women are the key decision makers in the market — they’ve got a lot of work to do to attract and serve women on their social media offerings.