@Chris_Skinner: It’s not Branch versus Digital, but digitizing all channels including branch

@gschmeltzer There is no head of digital at Amazon or Zappos – they ARE digital. Banks need to be, too.

Both spot-on tweets. Ginger’s tweet, though, got me wondering:

Exactly how digital (or not) are banks?

A company called Urban Airship released the results of a study that might help provide some answers to my question. It surveyed 500 “mobile leaders” across a number of industries, having them perform a self-assessment of their firms’ digital capabilities according to a maturity model UA has developed.

UA’s findings suggest that, relative to other industries, financial services companies might not be as backwards as some folks want to make them out to be.

UA categorized respondents into eight industry categories (including an “other” segment). From a financial services perspective, the two most relevant industries to look at for comparison purposes are Media, Entertainment, & Sports (MES), and Retail, Food, & Travel (RFT). There’s no question that the sample size of financial services companies is on the low side (n=30). But UA claims American Express and Capital One among participants, so financial services participants may be representative of larger FIs.

1. FIs aren’t lagging on mobile deployment. According to UA’s findings, nine of 10 FIs have deployed mobile apps, in contrast to eight in 10 MES companies and a little more than half RFT firms. Almost a quarter of the FIs surveyed offer mobile wallets, almost twice the percentage of firms in the other segments. One mobile tech where FIs aren’t ahead is push notifications, which is curious because the nature of financial services leads to a strong need for proactive notifications (what are MES firms pushing? sports scores?). 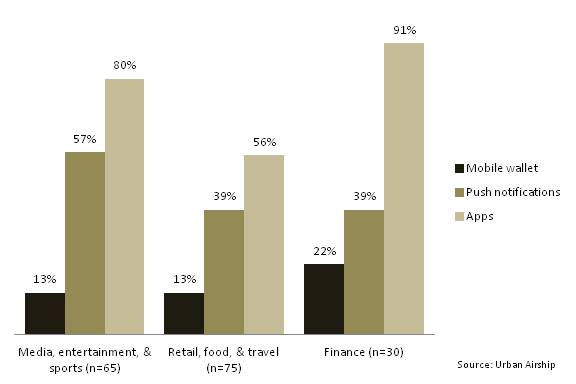 2. FIs are on-par organizationally. Just 13% of the FIs surveyed have no organizational resources dedicated to the mobile channel, a similar percentage of MES companies, and half the percentage RFT firms. At the other end of the spectrum, the 44% of FIs having a team dedicated to mobile product development is slightly behind the percentage of MES firms with a similar team, and ahead of the 31% of RFT firms with a mobile product team. 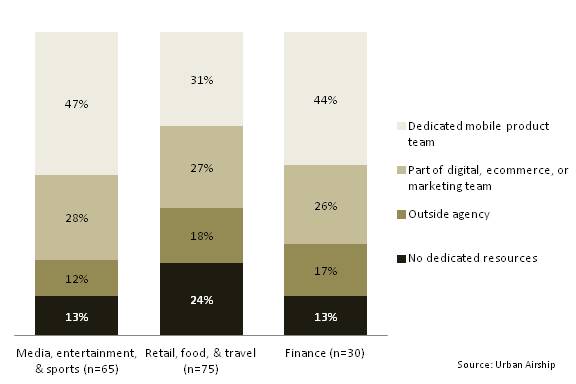 3. Few FIs are in the reactive stage. Perhaps the most interesting part of the study is the categorization of respondents into maturity stages based on their answers to the 13-question assessment. There is a 5th stage–the relationship stage–but none of the firms in the MES, RFT, or financial services industries qualified for this stage. And while not-even-a-handfill of FIs qualified for the strategic stage, the percentage that did were hardly different from the percentage of MES and RFT companies at this level. Just 13% of FIs surveyed were at the bottom of the stack, though, in the Reactive stage, half the percentage of RFT companies at this level. 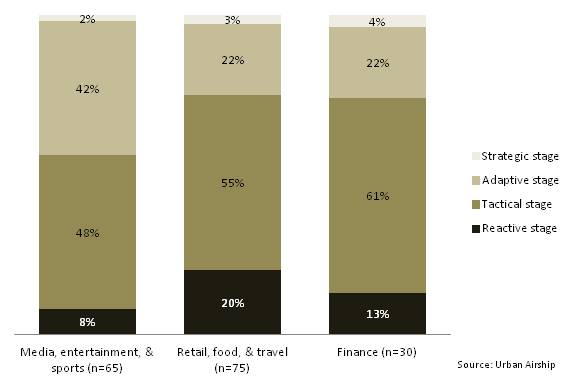 My take: Truth be told, I don’t like any methodology I didn’t come up with. It’s hard for me to see how you can tell a company is using mobile technologies at a tactical, or strategic, or relationship level (how is that different or better than “strategic”?) by asking 13 questions.

But the organizational approaches to mobile, and the mobile tools deployed by the respondents to UA’s study suggest that FIs aren’t necessarily laggards when it comes to mobile (and maybe more broadly, digital) technologies.

Two-thirds of the credit union executives I recently surveyed said that their organization has “significantly improved” its digital marketing capabilities over the past three years. So calls to “be more digital” aren’t falling on deaf ears.

But what the UA study really suggests is that FIs–as an industry–aren’t really lagging other consumer-focused industries. Instead, there are certain firms–Starbucks comes to mind–that stand out as digital leaders, and that most of the companies in their own industries are lagging the leaders.

Do all FIs need the digital capabilities of the digital leader in their industry, or even other consumer-related industries? The answer–which you might not like–is no.

There’s a well-known cartoon with two guys in the woods being chased by a bear (I think it’s a bear) and one guy stops to put on his sneakers. The other guy says “what you [email protected]# you can’t out-run a bear!” To which the guy with the sneakers says “I don’t have to out-run the bear. I have to out-run you.”

It’s a similar construct with banks. Banks don’t have to provide the mobile capabilities of Starbucks. They have to be as good, or a little better, than the next bank (the one, or ones, they compete with).

And so that takes us to what’s so screwy about the world of banking right now.

Who, exactly, are the digital leaders within banking that the other banks have to keep up with, or stay one step ahead of?

For me, the answer is Simple and Moven.

So here’s the screwy thing: One research study recently reported that Gen Yers basically hate the big banks. Put them at the bottom of the list of most-liked brands. Yet–as apparently Tom Brown reported at a conference this week (I wasn’t there, picking up on this from Twitter)–Gen Yers who do switch banks are switching to large banks because of those FIs’ mobile technology capabilities.

(Side note: Another study reported that 1/3 of Gen Yers would switch banks in “the next 90 days.” Since we’re probably already 90 days out from when the survey was conducted, and we know that 1/3 of Gen Yers have not switched banks, you can come to your own conclusion of the validity of this finding.)