Subscribe Now Get The Financial Brand's FREE Email Newsletter
The pandemic's emphasis on contactless payments left a legacy of renewed interest in wearable payment devices that people used to see as novelties. New York's innovative Quontic Bank has launched a Pay Ring that may indicate how quickly wearables will take off.

Quontic Bank is a small New York City digital-first institution that likes to innovate. In fact, its tagline is “The Adaptive Digital Bank” and it was a crypto pioneer in offering Bitcoin rewards on its checking accounts. Its latest move is the introduction of what’s believed to be America’s first-ever payment ring, a piece of functional jewelry that serves as a wearable debit card. It can be used anywhere that tap and pay service is available.

Quontic introduced its “Pay Ring” in April 2022. At present the rings are available as simple black bands in a range of sizes that are fitted to customers who opt into the new service.

Steven Schnall, CEO and Founder of Quontic, explains that one wrinkle in offering a debit payment ring is that fingers come in multiple sizes so an inventory of them — 20 in all — must be maintained, with extras for the most common ones. Adding another color or two would double or triple the necessary inventory, so for now it’s basic black for everyone. (The inside of the ring is inscribed with the bank’s Q logo, the Mastercard logo, and the logo of the U.K. manufacturer, McLear.)

“We want to see what kind of consumer adoption and excitement we can build around the product before we go all in on inventory,” says Schnall. “There’s no data around customer adoption of this here because this is the first time it’s being tried in the U.S. It’s part of our effort to differentiate from other banks, especially among digital ones where it’s becoming more and more crowded.”

Why a Ring Stands Out:

Exclusivity marks a key difference between a payment ring and a smartwatch that can make payments by interfacing with a digital wallet. The latter may contain multiple cards. A ring comes from a single bank, tied to a single account.

Wearable Banking Ditches Both Digital Wallets and Traditional Ones

“You hear banks talking about being ‘top of wallet’ or ‘front of wallet’ with cards,” says Schnall. “But our thesis is to skip the wallet altogether by being right on somebody’s hand. Then there’s a much higher likelihood that they’ll use our debit card, because to use another they’ll have to haul out their wallet.”

The CEO says he’d been in Europe just before the public launch with a Quontic ring that had already been enabled. Contactless readers for cards are much more common in Europe, he says, but people were still impressed by the ring and wanted to know how to get one. (See The Financial Brand‘s own test drive at the end of this article.) 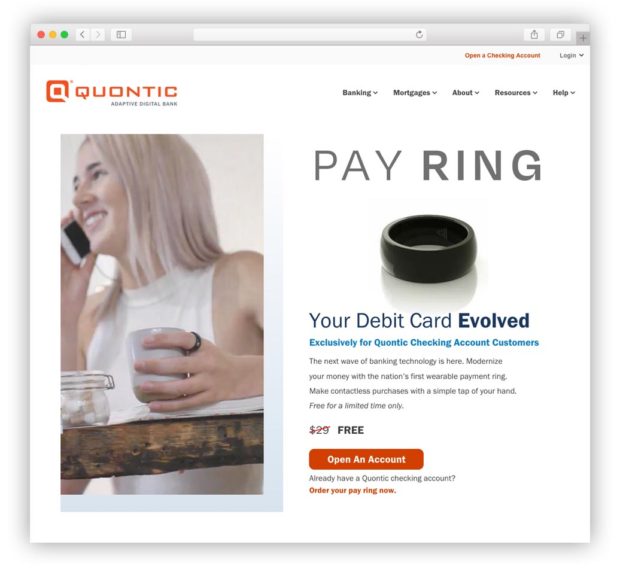 In everyday use, Schnall says he uses his Pay Ring every morning when he boards the New York City subway to go to the office.

“I’m usually carrying a cup of coffee and maybe something else and with the ring I don’t have to reach for my wallet and pull out my debit card nor open Apple Pay on my phone. It’s not like using a contactless card is complicated, but the ring makes it super easy.” An associated app tracks transactions and other data.

Interestingly, in the act of tapping, there is contact with surfaces. But as a veteran payments banker recently told The Financial Brand the public’s conception of “contactless” has been evolving since the early days of the pandemic. Back then, people wore plastic gloves or used cotton swabs to punch the buttons on payment terminals and ATMs and avoided handing their credit or debit cards to anyone. Now the feeling seems to be that so long as you don’t touch the cashier, you’re in the clear, the executive said.

Quontic’s experiment began with staff and debuted in April 2022 with an email offer to about 10,000 checking customers. Schnall says about 15% said they wanted a ring — a $29 cost that the bank is waiving for now — and most have ordered rings in their sizes.

Schnall thinks rings will work over something like bracelets, which at least one financial services company in the U.S. tried and withdrew. “Not a lot of people wear bracelets, and they are more of a fashion choice,” says Schnall. “But rings are widely acceptable to most.”

He and his wife wear theirs on the wedding band fingers. The pay rings match, of course, “so it’s kind of cool,” says Schnall. Down the road one possibility is prepaid ring “gift cards.” Another would be team-oriented rings.

Will Banking Wearables Take Off in the Wake of the Pandemic?

Quontic is introducing the ring at a time when wearables are still a nascent development in the scheme of things in the U.S. But the potential is deep. And any kind of device that one wears sounds vastly more appealing than implanted payment chips that have been marketed in Europe by firms such as Walletmor. (However, a study by Marqueta and Consult Hyperion indicates that just over half of Europeans surveyed would be willing to have a payment chip implanted, under certain conditions.)

A 2021 study by Raddon found that 17% of consumers sampled made more use of apps on smartwatches or other wearable devices for purchases at a time when people were trying to do more in contactless ways. The same study indicated a much stronger preference for mobile phones used for digital wallets.

A study by Juniper Research projects that contactless payments will grow globally by 2023 to 49 billion transactions from 26 billion in 2021. That could buoy wearables too.

“Contactless methods’ growing popularity has piqued consumers’ interest in emerging technologies such as wearables,” observes a report by PYMNTS.com. The report cited figures indicating that sales of wearable payment devices rose by about a third in 2021 over 2020 levels, and that seven out of ten of those devices were smartwatches. Figures from Counterpoint indicate that in the U.S. the Apple Watch dominates. In the last quarter of 2021 it accounted for 56% of smartwatch shipments, with Samsung at 22% and Lenovo at 12%.

PYMNTS.com says institutions’ interest in smartwatches and other wearables came before the pandemic, but that these efforts were seen as more of a novelty until the desire for more contactless means of payment resulted in a more interest in digital wallets and wearables.

There is still a selling job to do, however. “Consumers are beginning to view wearable devices as more than a novelty but are still tapping these tools for a somewhat narrow range of purchases, suggesting a lingering trust gap,” according to the report.

A development further out on the timeline is the distribution of central bank digital currency. An April 2022 paper by the Bank for International Settlements suggests that citizens of countries using CBDCs broadly could be issued government wearables.

I have to admit, I’m a little edgy going to my local supermarket with Quontic Bank’s Pay Ring. It’s embarrassing enough when a card is declined, and this has the potential to be worse.

At a ShopRite store, after buying a few groceries, I’m hoping the terminal will recognize the ring. The bank had forewarned me that the trick to getting the ring to be read was to make a fist, rather than waving my hand, so the ring is presented properly. The instructions compare it to a motion like knocking on a table.

The cashier looks tired and it’s late evening. I smile when I explain that I’m there to test a new way of paying, a ring, and I show her the Quontic Bank box the ring arrived in. She looks a bit skeptical and shrugs as she hits “total” and I make my fist to pay.

One second of silence. I realize I didn’t “tap,” so I tap. Then a beep and the ring is approved and, since it’s a “debit card,” the terminal asks if I want cash back. It’s a test ring and not my money, so I decline and bag my groceries.

“Pretty cool,” says the cashier. Someday this will all be as unremarkable as a chip card transaction is today. Remember when those were a big deal, when people got upset about waiting “forever” for the beep?