Subscribe Now Get The Financial Brand's FREE Email Newsletter
A TransUnion study of back-to-school shopping patterns suggests that several trends are converging that could lead to major changes in how people buy and pay in general.

Here’s a learning opportunity for banks, credit unions and fintechs: The back-to-school shopping season may hold the clues to how payments usage patterns will shape up for the near-term as consumers continue to adapt to inflation and potential recession.

Research from TransUnion regarding the spending plans of parents as well as children old enough to shop for themselves reveals movement in how people are paying and where those payments are being made.

Among the key elements of the research are findings about their rising use of buy now, pay later options, a growing interest in digital wallets, and a major generational move towards curbside delivery that has nothing to do with Covid.

How Inflation and Economic Change are Driving Spending Attitudes

In terms of overall spending, over half — 55% — had to spend more this year. 16% of the company’s survey sample indicated that the cost of back-to-school shopping had risen substantially and 39% said the cost had increased at least somewhat. 33% said that it was level with 2021 spending. Another 10% said spending had fallen compared to the year before.

To deal with rising prices, 38% of the respondents report buying cheaper versions of things while 34% are buying fewer of certain items. 21% of respondents have cut out certain goods.

The figures reported here and in the following sections include both ecommerce purchases and purchases made at physical point of sale.

The survey report notes that buy now, pay later options are giving families a tool to level out their back-to-school spending, spreading costs over more time rather than taking a single hit to the pocketbook. TransUnion stated in a summary of its study that BNPL installments are attractive to consumers who are stretched thin.

37% of shoppers surveyed by TransUnion are using BNPL to pay for back-to-school — versus just 2% the year before.

The largest users of BNPL were Millennials — not surprisingly, given that they are the parents of many current school-age kids and in their peak spending years. 47% of Millennials are using BNPL this year. Gen Z follows at 34%. 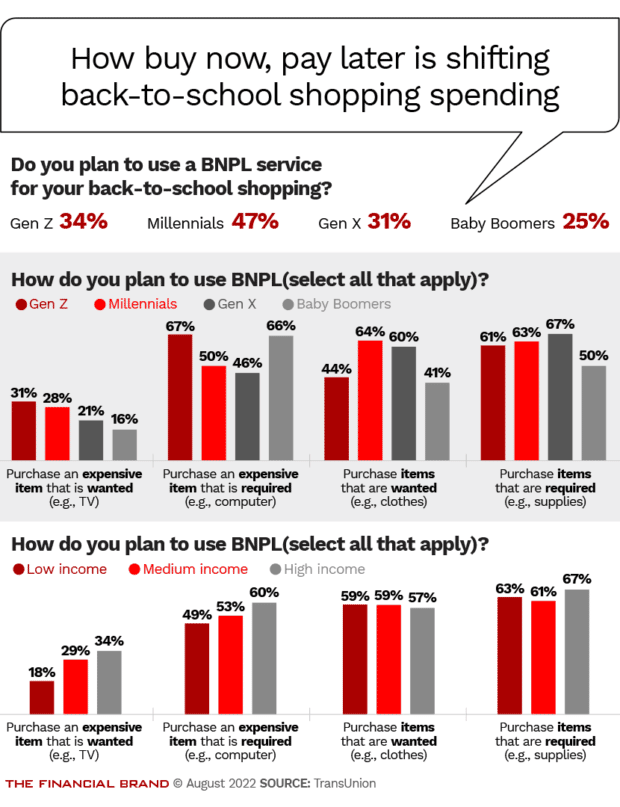 Usage of BNPL across income levels was consistent, but how it was used differed.

Mark Rose, Senior Director, Marketing Solutions, at TransUnion, finds it significant that 62% of the overall sample are using BNPL for smaller items, like books and apparel. When buy now, pay later debuted broadly in the U.S. consumers tended to use it for larger, more expensive items like high-end exercise equipment and computers.

“What you can take away from that is that consumers are increasingly comfortable with BNPL,” says Rose. “They may not need to finance the item, but they like the convenience of being able to pay for it over, say, four payment periods with zero interest.”

Rose says retailers recognize this preference and are adding BNPL as a way to improve customer experience.

The younger the consumer, the more likely they are using these methods at checkout, but the dominant reason across all generations studied is speed. All consumer groups said they find this faster than debit and credit cards. 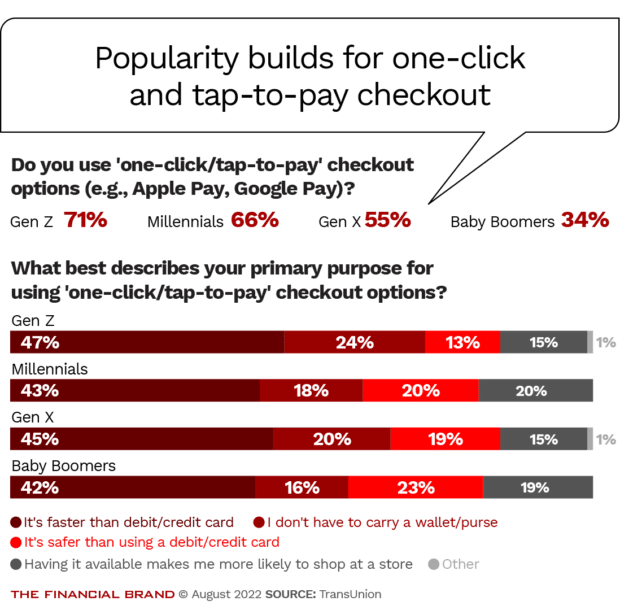 From the perspective of retailers and the financial institutions who provide them with payment terminals, about one in five consumers surveyed who use one-click and tap-to-pay said that they were more likely to shop at stores that offer this choice.

“It was glaring to us, how important this is,” says Rose. “So convenience is huge, and it’s changing retail.”

In addition, two out of five of these consumers planned to spend more money on back-to-school items for 2022.

Significantly, availability was not an issue among those respondents who don’t use these options. The dominant reason, half or more of each group by generation, was that they do not see improved convenience over credit cards.

Rose notes that while 60% of the overall sample uses curbside pickup, 70% of Millennials do so. This means that a key group of payments users are actually often transacting before they get to the store they are buying from.

Curbside buyers are using stores like warehouse locations, rather than retail purchase points, paying before they arrive.

Rose notes that near his home there is a Walmart that is strictly a pickup location — shoppers can’t browse in the building.

This suggests that the payments stream for more purchases will be pulled to online and mobile channels maintained by merchants offering curbside, rather than the processors offering payments services inside a store. 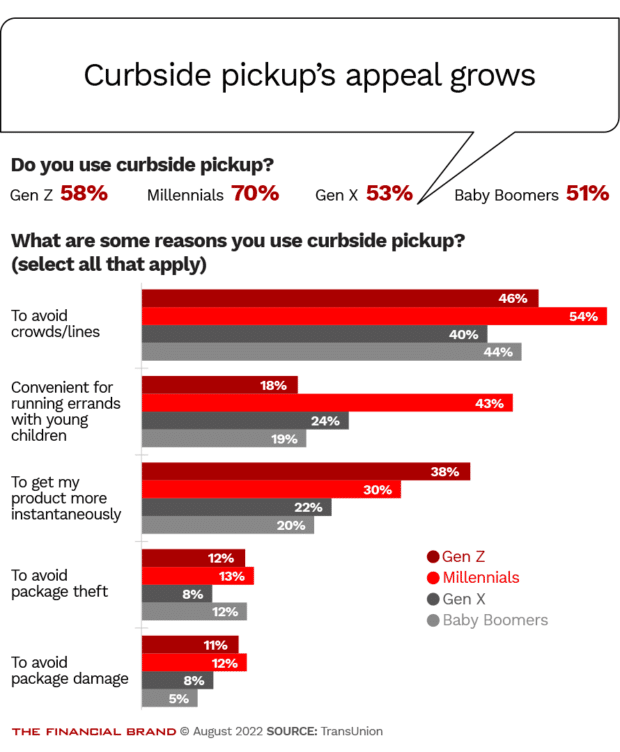 Interestingly, while curbside in the last couple of years had Covid roots — even some banks and credit unions were offering curbside service at one point — that wasn’t specifically among the reasons reported in TransUnion’s research. Among the Millennials, the leading reasons were avoidance of lines and crowds and convenience when running errands with younger children.

Among Gen Z users of curbside, a key reason is more immediate receipt of products purchased.

“Curbside pickup has a wide breadth of value across consumers, whether their default or preference is ordinarily in-store or on e-commerce,” says Rose. “Again, it’s a better way for them to serve their customers.”

The report points out the 70% of consumers who use curbside use one-click and tap-to-pay options.