More adults use mobile phones to pay bills than smoke cigarettes. According to a May 2013 study from the Pew Research Center’s Internet & American Life Project, 56% of adults (135 million people) in the US own smartphones. In a January 2013 survey on FindABetterBank, 39% of smartphone owners indicated they used their smartphone to pay at least one bill within the last 30 days. That works out to 53 million adults, or 22% of the adult population. The most recent data from the Center of Decease Control indicates 18% of the adult population smokes cigarettes. 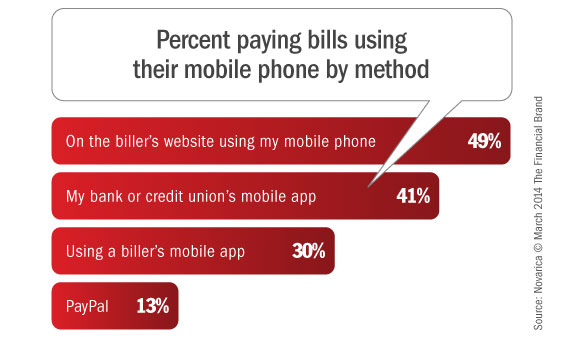 From April 2013 to January 2014, the percent of smartphone owners making mobile payments grew by 36%. The mix of mobile services that consumers used to pay bills hasn’t changed much between surveys. For example, in January 2013, 41% indicated they used their banks’ or credit unions’ mobile app versus 39% in April 2013. Here’s what we’ve learned:

Biller website and apps are the most popular mobile billpay destinations. 68% of people that pay bills with their mobile phone use either the billers’ websites or their mobile apps. This is because paying the biller directly is the fastest method. Most consumers want these payments credited to their accounts immediately.

Younger consumers use biller websites and other services. Over 90% of consumers under 30 that pay bills with their mobile phone go directly to the biller’s website or use the biller’s mobile app.