Subscribe Now Get The Financial Brand's FREE Email Newsletter
Using only the camera that comes standard on today's mobile devices, people can now open new bank or credit union accounts in less than 60 seconds. It's hard to imagine a system that can get any easier than this.
Subscribe Now!

Mobile Photo Account Opening is the latest in a series of mobile innovations to come from the San Diego-based financial incubator Mitek. The new white-label application does basically what its name suggests: consumers can open a new bank or credit union account simply by taking a few pictures with their mobile device. 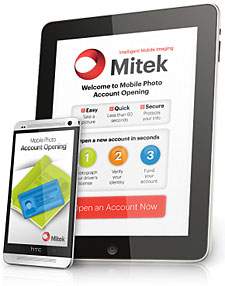 Mobile Photo Account Opening gives consumers the ability to open an account (checking, savings, credit card, auto loan, etc.) by simply snapping a picture of their driver’s license with a smartphone camera. Then all they have to do is take a photo of a check to fund their new account and they’re done. It effectively eliminates the need to enter any information manually — a “Eureka!” breakthrough.

Mitek estimates the whole process can be completed in under 60 seconds.

Mitek’s solution goes way beyond the tablet apps financial institutions are currently using. Up until now, tablet apps built for opening accounts used the same offline, analog form that has always been used in banking; people would still have to sit down and spend a few minutes filling it out.

Reality Check: You can migrate forms to digital channels, but consumers are still going have the same feelings as they would towards any “paperwork” — it’s a tedious burden.

Mitek says its photo imaging technology works with virtually any kind of required documents, including W-2s.

Mobile Photo Account Opening is going to shake things up. It’s not often the banking industry sees a major development come along, but this is one of them. 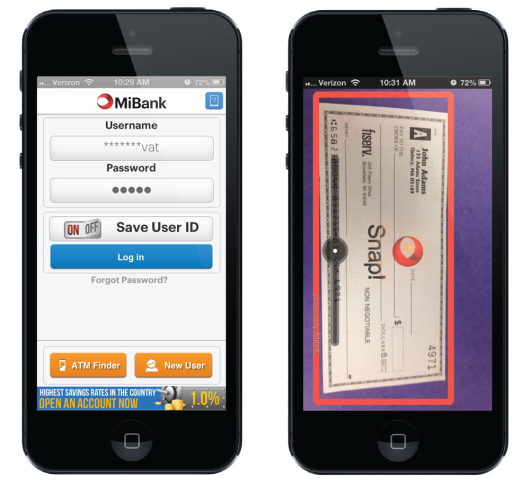 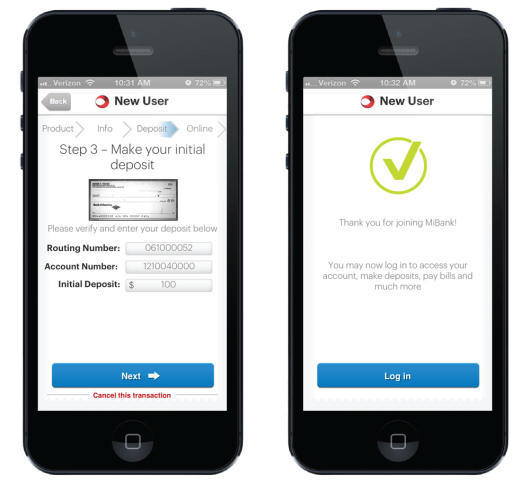 A Solution for High Abandonment Rates

While some progress has been made with desktop and tablet applications, mobile account origination has been a tougher nut for retail financial institutions to crack.

At the end of the day online forms are still just that: forms. Users are forced to manually type information, which can be wildly annoying on a tiny mobile keypad.

“It’s a horrible experience, applying for a checking account on a mobile device,” Carter told the Credit Union Times. “There’s a lot of abandonment — at least 25%, some institutions report over 50%.”

Carter is alluding to a study that found high abandonment rates with the current online and mobile account opening options financial institutions are using today. The report found that 88.5 million Americans attempted to open an account online or with a mobile device in the past 12 months. 20% of those were applications for checking or savings accounts via smartphones and tablet devices. One quarter of all checking account applicants did not successfully complete the process.

Mitek believes its app could be used on tablets by bank employees to make the process easier while introducing new customers to mobile banking.

James DeBello, CEO of Mitek, says Mobile Photo Account Opening creates a whole new world of possibilities, with the potential to revolutionize how accounts are opened in every channel — online and off.

“It is a great tool for getting employees out from behind a desk and streamlining account opening in the branch and in the community on a tablet, making account opening a faster, more friendly and engaging process,” DeBello explains.

The fickle, finicky fintech crowd seems to agree with Carter’s assessment. Mitek won a coveted “Best of Show” award at the fall 2013 Finovate technology conclave for its Mobile Photo Account Opening technology. To put that in some perspective, previous Finovate winners include Mint, Credit Karma, BancVue, Dwolla and Yodlee. That’s excellent company, and a likely indicator that more great things are in store for Mitek.

Mitek his pioneered a number of banking innovations in the mobile channel lately. They have lead the financial industry’s charge into mobile check deposit, and more recently introduced mobile photo bill pay. Today the company’s applications have been deployed by over 1,000 banks and credit unions.