Subscribe Now Get The Financial Brand's FREE Email Newsletter
Digital payment usage in total is up, in all age groups, but among older consumers – including older Millennials – ownership of mobile wallets has declined, FIS data shows. Questions over complexity versus benefits could be part of the reason.

In the rush of statistics and predictions concerning increased use of digital banking and digital payments, a report shows an actual contrary trend could easily be dismissed as an aberration. Don’t be too hasty.

With forward-looking surveys where consumers are asked “Would you do this?” that could well be the case. But with studies measuring actual behavior that has already occurred, a contrary point is worth closer attention.

Such is the case with some findings of an FIS PACE Pulse study conducted in the first quarter of 2021. Ipsos conducted the survey of 1,015 U.S. consumers about their use of banking products, with several questions related to payment usage.

The 2021 survey results were paired with results from a similar survey conducted in April 2020, which provides an interesting view of how trends set in motion — or amplified — by the pandemic have played out.

Many of the findings fall in line with what other research has found: Namely that consumer use of digital payments rose sharply during the pandemic, and has so far stayed at a higher level. But one question uncovered a weak spot in the digital payments trend. 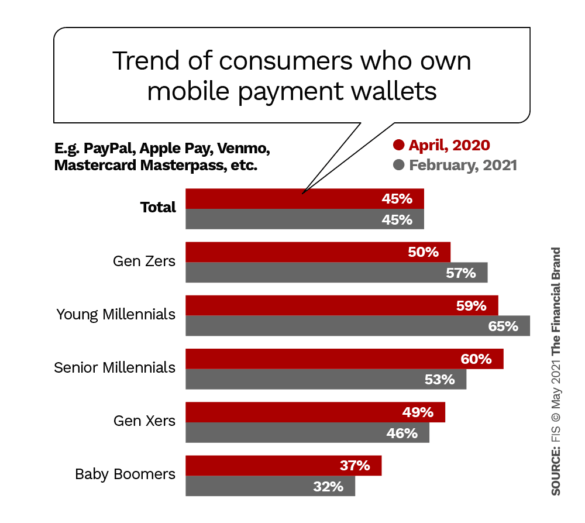 Notable also is that FIS asked the question broadly. They did not define “mobile wallet” but gave several examples (“e.g., PayPal, Apple Pay, Venmo, Mastercard Masterpass, etc.”). The inclusion of Venmo is a nod to the fact that many younger consumers use the payment app as a form of wallet.

The Financial Brand asked FIS to comment on the payment-related survey results. Chief Transformation Officer Kelly Beatty responded that “The decline of mobile wallet ownership among senior Millennials, Gen Xers and Baby Boomers was an interesting development for us. Most of the key barriers to digital wallet adoption are [factors] that we believe most heavily impact this segment.”

These include security concerns that would cause these consumers to limit the number of active wallets they use, Beatty says.

“There is a clear preference for simplicity and more resistance to gaining mastery over a technology they haven’t yet decided is worth the effort.”

The knock on mobile wallets for years has been that they were a solution in search of a problem, given that credit and debit cards are ubiquitous and easy to use. There is also the ongoing question — reemerging now that in-store shopping and dining is ramping up again — of whether merchants and restaurants can accept mobile wallet payments.

As McKinsey observed in its 2020 Digital Payments Consumer Survey, “The digital growth picture is not entirely rosy. … Consumer trust has eroded slightly and although consumers are turning to digital payments in increasing numbers, it is not clear whether all recent behavior shifts will prove to be permanent.”

38% of over-55 consumers are digital payment holdouts, a ratio that has remained stubbornly consistent, McKinsey states.

Perceptions of value, security, and availability pose a “continuing challenge in effectively communicating the value and enabling ubiquity of digital solutions,” McKinsey states. That comment relates specifically to contactless cards, yet it would seem to apply even more so to digital wallets.

Read More: Cryptocurrency: The Most Important Payments Trend to Watch

Wallet Owners Use More of Them

Almost as noteworthy as the flatlined growth of mobile wallet ownership is the fact that of those consumers who do use them, they are using more of them.

Why Just Have One?

32% of mobile wallet users report having three or more wallets, up from 21% a year earlier, FIS reports.

As Beatty points out, “Open wallets — like Google Pay and PayPal — typically allow users to remove funds as cash where closed wallets — like Starbucks or Walmart — are tied to specific merchants. While you may only need one or two open wallets, depending on how broadly they are accepted,” she states, “you may want a variety of closed wallets to take advantage of membership programs and rewards.”

If a consumer has a Samsung phone and typically uses Samsung Pay, says Beatty, but their favorite coffee shop only takes Apple Pay, they may add that wallet. And in the era of cryptocurrency, the FIS executive says, some consumers may want to add a crypto-friendly wallet like Coinbase to their collection. (FIS reports that a handful of younger Millennials say they have as many as nine different wallets!)

FIS probed consumer use of other types of digital payments and found that the use of contactless payments, online payments and mobile app payments grew rapidly over the ten-month period from April 2020 to February 2021. 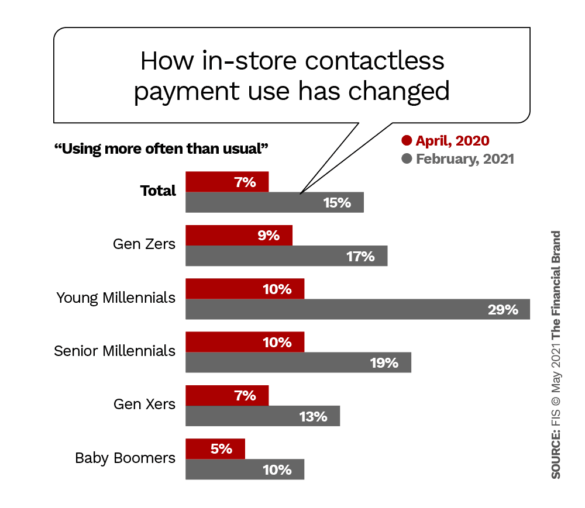 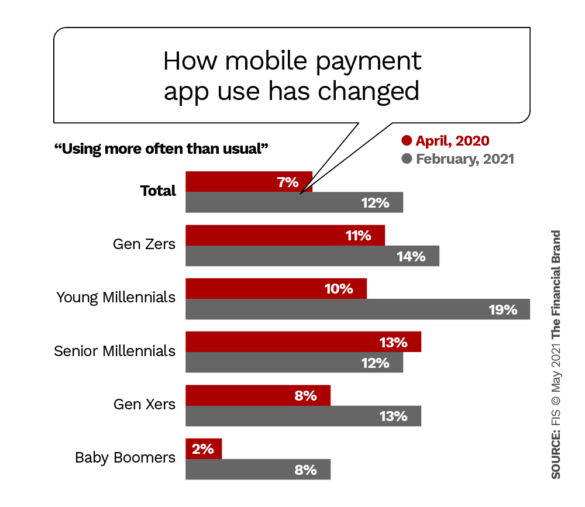 As shown above, the percentage increases of people using a certain type of payment “more often than usual” doubled or tripled in some segments (e.g. young Millennials’ use of contactless payments).

And although fewer Boomers own wallets than a year ago, those who have them have been more actively using them.

Based on the survey results Beatty believes increased digital payments will persist. This will be in spite of the fact that merchants and financial institutions are still getting their bearings about the extent to which the digital transformation of the past year will slow or continue at the same pace. As for mobile wallets, she expects their adoption will normalize and that they will be used for an increasing number of transactions.