Subscribe Now Get The Financial Brand's FREE Email Newsletter
Credit card companies continue to have solid satisfaction in an uncertain economic environment, but big concerns are on the horizon. Many consumers are experiencing financial stress, and higher interest rates are leading them to look at other options, like buy now, pay later.

The value proposition of the typical bank credit card is under pressure from both macro-economic forces and consumer preferences.

It’s not that consumers are unhappy with most credit cards. They are quite satisfied with them for the most part. But the stress they are feeling from rising interest rates on most cards plus worries about the impact of a possible recession are leading many to reduce spending on their primary cards. Potentially more worrisome for card issuers is that consumers are increasingly considering other lending options, notably buy now, pay later plans.

For a long time, credit cards have been all about rewards and not as much focus on terms, interest rates and fees, observes John Cabell, Director of Banking and Payments Intelligence at J.D. Power, in an interview with The Financial Brand. “That pendulum is swinging a bit,” he says, “and we are seeing more focus on things that matter to consumers in a different kind of economy.”

There were several notable findings in the 2022 study. First, as indicated, cardholders are generally happy with their credit cards, and satisfaction trends have increased. Overall satisfaction, Net Promoter Score, and trust for credit card companies slightly improved in the past year.

This was mainly attributed to “significant improvement” in scores for benefits, credit card terms, and mobile and communication factors. American Express, Discover and Bank of America took the top three spots for customer satisfaction among national issuers, while Goldman Sachs, TD Bank and Fifth Third ranked among the top midsize issuers.

One concerning trend for card issuers, however, was that the portion of spending consumers put on their primary card is declining. Credit card customers reported allotting 42% of their monthly spending to their primary credit cards, down from 47% in 2021 and 2020 and 50% in 2019.

The survey also found that during the past five years, the average monthly cash spend is up 49%, and debit card usage is up 80%, while spending on primary cards has remained relatively flat at 2%. 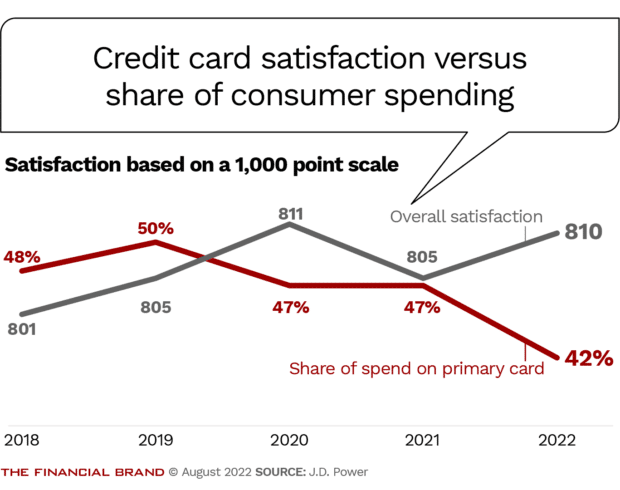 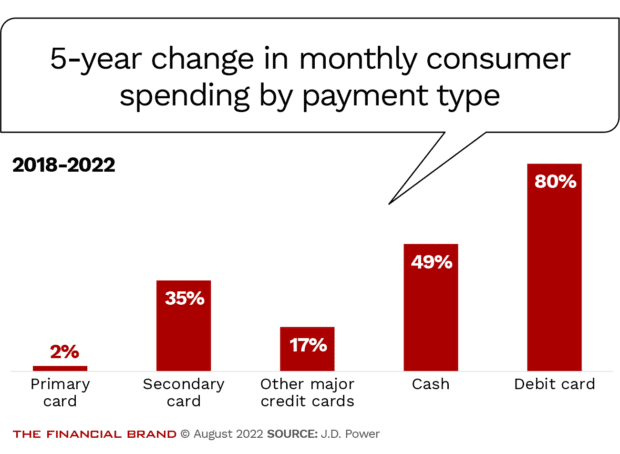 Reduced spending on primary cards is partly attributed to the fact that consumer financial health is on the decline. 57% are now considered “financially unhealthy,” up four percentage points from a year ago. Additionally, 22% of consumers report being worse off financially in 2022, compared to 18% in 2021.

Furthermore, 49% of credit card customers say they were carrying debt on their primary card, compared to 43% in 2021.

There is a complex confluence of events currently impacting consumers’ relationships with their credit cards, says Cabell. A financial “hangover” from the pandemic and the looming recession is affecting spending behaviors. While many consumers have spent more on entertainment and travel in recent months, they are also starting to be more cautious with their overall spending.

Meanwhile, rising interest rates on credit cards have made them a much less attractive financing option. As a result, while credit cards have seen a boost in the past few months, spending on a five-year trend is relatively flat compared to other options.

Other short-term lending options, such as installment plans, personal loans, and buy now pay later programs, have “exploded” over the past 24 months, says Cabell. These choices are particularly attractive to consumers who are financially stressed and have tighter budgets. That is a swath of the cardholder population that is “growing rapidly,” he states. J.D. Power data indicated a “significant spike” in consumers who cannot pay their bills and lack long-term financial plans.

BNPL Is a Rapidly Growing Choice 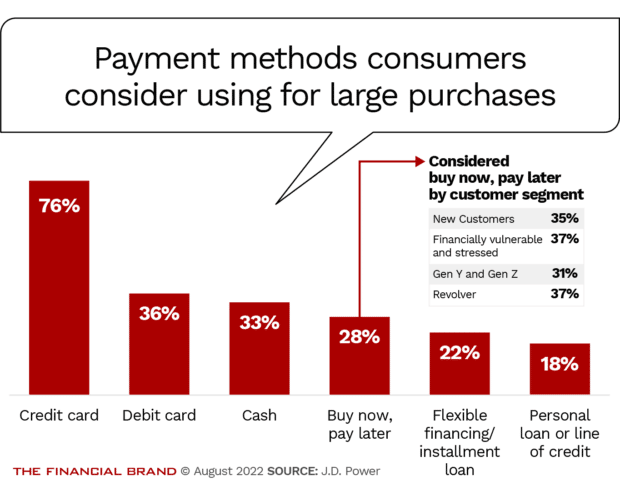 Some credit card issuers are now responding with their own BNPL solutions that offer installment plans with a low interest rate or interest-free period on particular transactions. However, these card-based options may not yet be able to compete with BNPL at the point of sale, where consumers can quickly transact with just a couple of clicks.

Over time, as leading financial institutions enter the buy now, pay later space, they may spin off BNPL programs, offering other banks a direct means to participate. “I think we will see more prominent financial firms move into that space and displace some of the fintechs that have led the movement,” says Cabell.

Impact of Rewards and Customer Service

While rewards may still matter to many customers, just 31% of them feel that their purchases maximize their rewards. A tightening economy and consumers’ financial conditions are leading many to further evaluate their current credit card choices. Part of that is about ensuring they make the most of their rewards and benefits.

Many credit card issuers have done a good job responding to consumer behaviors by adjusting reward programs and making them more flexible. Rewards still matter for many consumers, and those seeking the best value rewards programs are intent on aligning their spending and reaping the program’s benefits.

“It is the primary tool that credit card issuers still have for attracting consumers, so getting that value equation right is still important,” says Cabell. “The consumer that isn’t looking for value and doesn’t have rewards and is more focused on interest rate may have debt to deal with. That consumer may be more likely to look at other products,” he states.

One consumer respondent to J.D. Power’s survey expressed frustration with the inability to talk to a “trained bank assistant.” “Instead, we get some poor soul in a call center reading scripts off a computer, and the only information they can provide me with is what’s easily attainable on the app or website.”