Subscribe Now Get The Financial Brand's FREE Email Newsletter
Customers are happier now that credit card companies are making less changes to the ways their programs are structured.

Credit card customers say they are more satisfied this year, according to the US Credit Card Satisfaction Study from JD Power & Associates.

The reason why? Nothing changed.

Credit card companies have stopped tinkering with rates, fees and rewards programs, which has come as welcome relief to customers who have come to dread the onslaught of surprise changes. 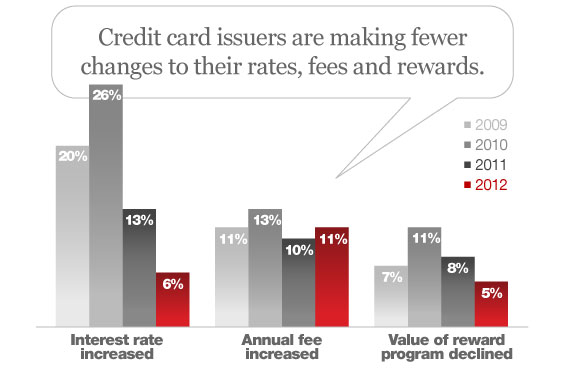 “There has not been a lot of change in the past year in fees, credit limits and card terms — the things that often affect customers in a negative way,” said Jim Miller, senior director of banking services at JD Power & Associates. “After a series of dramatic changes, credit card customers are enjoying a time of stability.”

Across the credit card industry, there is an overall perception that issuers have become more customer-driven and less focused on profits, while also being more flexible, friendly, and proactive. That’s the good news.

The bad news is that consumers generally feel the reputation of credit card issuers has gotten worse. Not only is their overall brand image in decline, credit card providers are viewed as less financially stable than a year ago.

JD Power says many issuers appear to be shifting emphasis from acquiring new customers to gaining greater share of spend from existing customers. Direct mail card solicitations, which increased steadily during the two years following the financial meltdown, peaked in June 2011 with 497 million offers sent. Since then, the volume has steadily declined, with only 260 million mailings in April 2012, a 33% decline from 12 months earlier. At the same time, issuers have intensified their rollout of enhanced rewards programs.

Problem Resolution a Key to Satisfaction

Credit card companies have significantly improved handling customer problems year over year. Issuers have reduced the average length of time to resolve problems in 2012 to four days from five days in 2011. In addition, the study finds that credit card representatives are more likely to provide time frames for resolution, and those time frames are more likely to be met in 2012, compared with 2011.

The study finds that satisfaction is significantly higher among customers who have their problem resolved by just one person on the same day they contact their issuer. Even if resolution takes more than one day, satisfaction is significantly higher when the problem is resolved by just one person, compared with customers who were transferred to another representative.

“On the one hand, the industry’s performance in managing problems has been strong,” noted Miler. “On the other hand, now would be the worst time for issuers to rest on their laurels.”

Struggling With Social Media, But Success With Mobile

The overall volume of consumers interacting with credit card companies in social channels is low, but on the rise. In 2011, only 2% of credit card customers engaged their provider through social media, increasing 1.5 times to 5% in only a year.

JD Power says credit card customers use social media to contact their provider with questions or to resolve problems more frequently than customers in other industries. However, financial services companies have received among the lowest JD Power ratings for “Promptness in Responding” and “Representative’s Concern for the Customer’s Needs.” In the credit card industry, only 60% of customers receive a reply from their issuer regarding their social media post.

“Social media is no longer just a vehicle for credit card customers to vent about poor experiences,” Miller noted. “It has also become a legitimate service channel where consumers can interact with representatives, have questions answered, and resolve problems.”

78% of customers in 2012 indicate they use their issuers’ websites, an increase from 76% in 2011. Credit card customers report accessing their issuer’s websites an average of 40 times per year, primarily to conduct simple transactions and to resolve problems.

While only 7% of credit card customers use their mobile phone to complete transactions — up from 4% in 2011 — satisfaction is highest among customers who use mobile to interact with their issuer vs. customers who use any other channel.

Marketing and Performance of Rewards Programs

Credit card companies also are doing a good job communicating their rewards programs, as 66% of customers in 2012 say they “completely” understand how to earn rewards, and 80% of customers say they “completely” understand how to redeem their rewards. Additionally, more credit card customers in 2012 than in 2011 are likely to indicate that the value of their rewards programs has increased (18% vs. 15%, respectively) and also report fewer reward expirations (24% vs. 28%, respectively).

Rewards programs have become a primary driver in the credit card industry. “While this is especially true among Transactors, rewards are also becoming an important driver of defection among Revolvers,” Miller explained. “During the past three years, the percentage of Revolvers who switched for a better rewards program has increased, and ‘better rewards’ is now the second-most important reason why Revolvers switch issuers, behind only a lower APR.”

For more info regarding the J.D. Power and Associates 2012 US Credit Card Customer Satisfaction Study, please contact Holly Zagresky at (248) 680-6319 or send her an email.