Subscribe Now Get The Financial Brand's FREE Email Newsletter
Amidst a languishing economy, consumers are taking on more credit card debt and delinquency rates are ticking up. Financial marketers may need to start adjusting their criteria for credit card offers.
Subscribe Now!

“The fourth quarter traditionally results in higher credit card balances and delinquencies, much of it to do with the holiday shopping season,” said Ezra Becker, VP of research and consulting in TransUnion’s financial services business unit. “Though serious delinquencies have risen seven basis points in the last year, average credit card debt has actually dropped, which is a sign that consumers continue to manage their credit well. Both credit card delinquencies and balances are below historic norms.”

“Consumers continue to value their credit card relationships and are diligent about paying off their balances in a timely fashion,” said Becker. “This is a positive sign as more and more subprime borrowers have either entered or re-entered the credit card market.”

The TransUnion quarterly analysis of credit card performance also examines origination rates, which are analyzed one quarter in arrears to account for the reporting lag of new accounts. In Q3 2012, new credit card originations dropped 2.4% relative to Q3 2011.

“It’s not surprising that originations dropped in 2012 relative to 2011, as solicitation volumes from the largest issuers decreased materially over that timeframe,” explained Becker.

Credit Card Delinquencies Rise Across the US

On a more granular level, 67% of metropolitan statistical areas (MSAs) saw increases in their respective credit card delinquency rates in Q4 2012 relative to one year ago. This is only slightly higher than last quarter, when 64% of MSAs experienced year-over-year increases.

Based on current economic assumptions, TransUnion forecasts credit card delinquencies to slightly decrease to approximately 0.81% in the first quarter of 2013. This forecast is based on seasonality effects and various other economic factors such as anticipated gross state product, consumer sentiment, disposable income, and employment conditions. The forecast changes as the economy deviates from a conservative economic forecast, if there are unanticipated shocks to the economy affecting recovery, or if lenders materially change their underwriting standards. 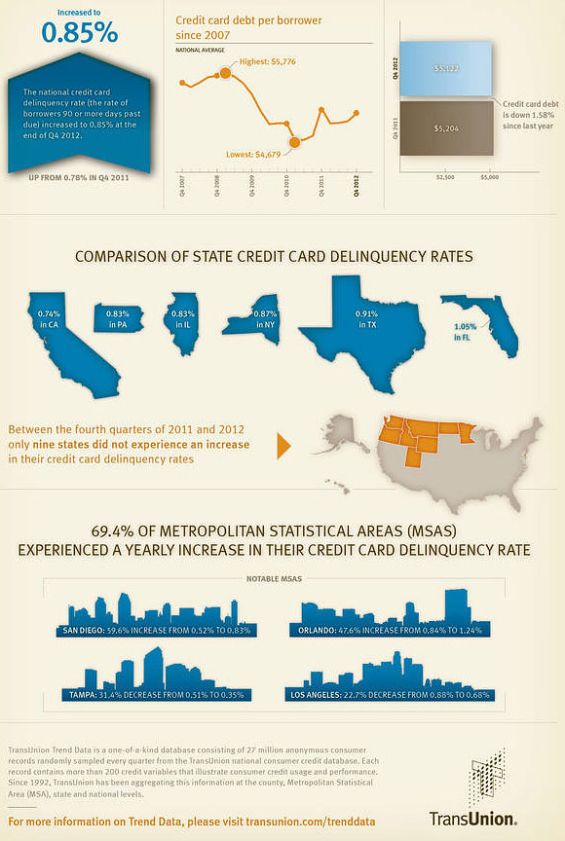