Subscribe Now Get The Financial Brand's FREE Email Newsletter
It is more than a bit ironic that on a day that Isis Mobile Wallet announced that they were going live with their carrier-backed digital payments initiative, a unique card-based solution named Coin announced their alternative solution to the overstuffed wallet.

The question is … which solution has the greatest chance for near-term and long-term success?

Maybe both will garner the support of the key involved parties. Maybe neither. Maybe another company will take the Coin concept mainstream sooner than the planned introduction. The one thing I am pretty sure of is that it is further evidence that financial institutions need to place multiple bets on alternative solutions to avoid being left behind.

Despite all of the talk in the industry around mobile payments, acceptance of new digital innovations and platforms has been anything but a smooth ride. In addition to the seemingly insurmountable challenge around consumer’s concern with security/privacy, getting merchants, consumers, financial institutions and even carriers on the same page has been close to impossible.

At the end of the day, the biggest challenge may be the perception by many that there is no reason to fix something that isn’t broken. The current card-based process for making payments, while not perfect, is relatively easy and definitely firmly entrenched in the consumer’s daily life.

Coin is a .84 mm thin plastic card-like device that can store any of your current cards (actually, 8 of them) and behave like the cards it replaces. Instead of carrying an assortment of debit, credit, gift, membership and loyalty cards from various institutions, you simply use the dongle provided (like the one used by merchants accepting Square) to capture your card information on your phone, take a picture of the cards and use the Coin app to load your Coin card.

When you are ready to pay or use a loaded card, simply press a button on your Coin card to select the card you want to use (electronics imbedded within the Coin card itself), present your card to the merchant like you have done in the past, and the rest of the process is the same as it is today.

For those concerned about the security of the card should you leave the card behind, the Coin card uses Bluetooth low energy technology to inform you on your phone that you left your card behind. Better yet, the card completely disables itself if your phone and card are away from each other for more than 10 minutes.

For those concerned about someone scanning another person’s plastic into the app, Coin says that the app only accepts a card that includes the user’s personal information. Further, the Coin app is protected with 128-bit or 256-bit encryption and the company is pursuing PCI compliance. The app is also password protected.

From the video alone, it is clear that Coin is cool. It is another example of incremental innovation, based on simplifying a person’s life seamlessly. It combines something that most are very familiar with (traditional magnetic swipe mechanics) and leverages very high tech digital technology to lighten a person’s wallet. The public definitely seems interested … in the first 48 hours, almost 2 million people viewed the demonstration video on YouTube, making this financial product the number one trending video.

No new hardware is needed since the device uses a traditional (or new form) credit card swiping device.

In other words, Coin has done what mobile payments is hoping to do (eliminate wallet bulk) without changing my payments behavior. And until NFC, Isis, PayPass or any other mobile payment alternative gains the needed momentum to become omnipresent in a consumer’s life, an incremental improvement may work for many.

Initially, the Coin card is expecting to be released in either black (‘Midnight’) or white (‘Snow’), with additional colors being introduced later (sound familiar?). The app will initially be able to run on both iOS and Android. Obviously, the Coin card would not be used for online purchases.

While not the best way to judge a new payments alternative, even the Coin website is cool.

While already having raised funds from venture capital firms (and interestingly the backing of former Google Wallet head Osama), Coin hoped to raise the $50,000 it says it needs to start producing the card by pre-selling the cards to the public beginning immediately for $50 on their website. This method of pre-sale was to gauge the acceptance of the concept up front and underwrite the initial offering. It is expected that the card will be priced at about $100 at introduction which is scheduled for the summer of 2014.

According to representatives from Coin, the start-up surpassed their initial goal for funding . . . within 40 minutes. In addition, the buzz in the industry (while not always the perfect barometer) was unprecedented. Obviously, the consumer wants an alternative to the fat wallet, that is easy to use, acceptable everywhere and avoids a steep learning curve.

To kickstart the process (pun intended), Coin is offering a $5 referral incentive for those who pre-order Coin. Once a person orders Coin, they will be provided a unique URL via email which can be used to tell friends and family about this unique payments solution. For each referred party (up to 10) who also pre-orders within 90 days, a $5 credit will be applied (up to covering the $50 cost of the service. 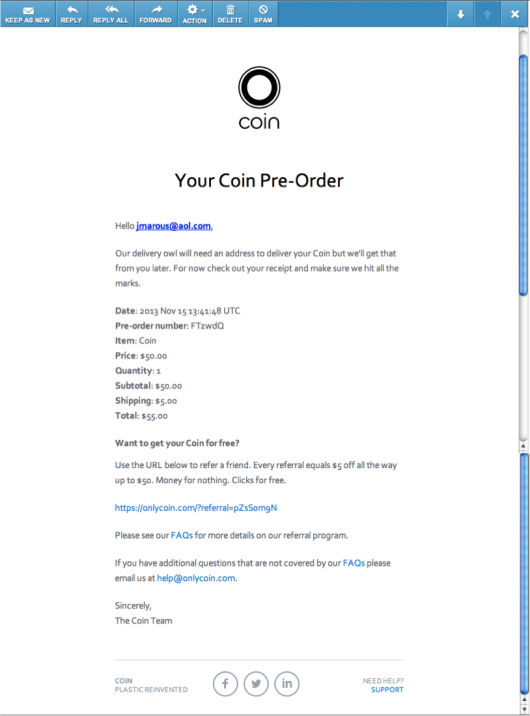 No Platform is Perfect

Just like the card-based platform Coin is hoping to simplify, the solution is not without some potential drawbacks. For one, while the concept of connecting the smartphone and Coin card for security is a significant benefit, there may be some challenges during normal use when the bluetooth connection is lost (during airplane mode) or the card is out of contact with the phone for extended periods. Coin says that reactivating will be simple.

Additional issues include the normal concerns around any card-based system such as potential skimming even though there is encryption, durability of the card (said to be 2 years of ‘normal’ use) and the fact that the Coin card is not waterproof. It is still to be seen how durable a computer embedded, less flexible card will be (especially in my pocket).

There is one more drawback . . . Coin won’t be available for at least another 6 months. Knowing the unpredictable payments world, the introduction will probably correlate with an announcement by Apple regarding their entry into the payments battlefield.

A Word About Isis

Not surprisingly, the newswires were buzzing with discussion and stories about payments innovations today. It just wasn’t about Isis.