Person-to-person payments are typically made using cash and checks, but a majority of consumers are interested in digital payment options from their bank.

According to a research report from Fiserv, digital payments have hit a critical mass, with 60% of respondents making a payment at least once a month using a laptop or desktop computer. 30% have made a payment via their mobile phone and 22% via their tablet.

Fiserv’s 2013 study, “How Americans Pay Each Other,” is based on a national survey of 2,533 U.S. consumers. The report analyzes person-to-person (P2P) payments — who people are paying, and how they are paying them.

According to the survey, 88% of U.S. consumers have sent money to another person in the last 12 months. People most often gave or sent money to friends and family members, yet to whom and how money is sent varies by age and gender.

Among those making P2P payments, 56% used cash, 41% used a check and 31% used an online method such as PayPal or a bank-based P2P service. The single most common way to exchange funds was giving someone cash in person, which accounted for one-third of all person-to-person payments. However, nearly one-third of respondents reported that they never have enough cash on hand to pay someone back, a number rising to 39% among 18 to 24 year olds.

79% of respondents said they would be open to using a digital person-to-person payment service from their bank.

“While digital payments are now common for things such as paying bills, there has not really been a practical way to send money to another person electronically,” said Tom Roberts, SVP/Marketing for Fiserv’s Electronic Payments division. “Services like Popmoney allow users to send or receive money using an email address or mobile number are changing that. Just as the ways people communicate with each other have become more digital, their payments to each other are becoming more digital as well.”

Who People Pay Differs by Age and Gender

People most often gave or sent money in the past year to friends (41%), children (41%), parents (37%) or other family members (42%). Younger respondents were significantly more likely to have given or sent money to friends. 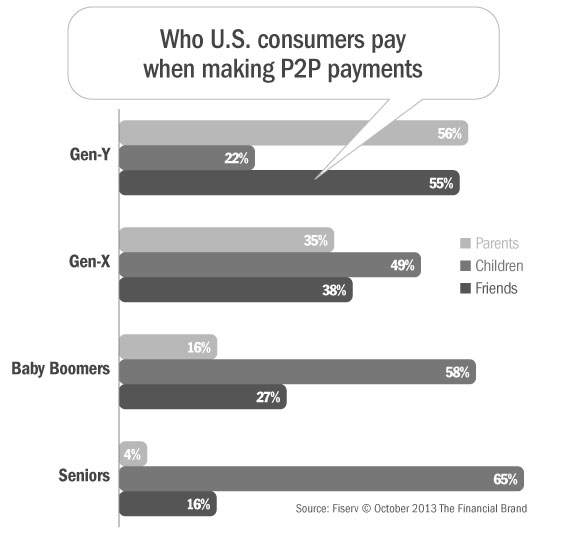 Read More: Banks & Credit Unions Must Get Into the Mobile Payments Now

Among the survey respondents, 46% reported that someone in their household pays the bills and others pay them back for all or a portion of the costs, 22% reported using a joint bank account and 14% said one person pays some of the bills while another person pays the rest. 69% of those who share bill payment responsibilities with a friend or roommate have one person pay the bills and others pay them back, while 42% of married couples do the same. The number of married couples paying each other back for bill payments is significantly higher among younger generations, with 64% of married 18-24 year olds and 57% of married 25-34 year olds taking this approach.

“People’s social payment needs seem to be becoming more complicated, with the need to clear expenses between members of a household, and even between married couples who are likely to be managing more than one bank account,” said Roberts. “Even if younger couples do have a joint account, they are paying each other in order to pay the bills.”

A sizable 75% of respondents wish it was easier to request money from a group of people who owe them, and nearly 50% have let people not pay them back because it was uncomfortable to ask them. This rises among 18-24 year-olds, among whom 57% have let people not pay them back. Women are also significantly more likely to say they have forgone repayment because they were uncomfortable asking to be paid back.