When the leadership team at Park City Credit Union first set out to increase debit-card usage among their members in early 2012, they considered a slew of different rewards-related solutions before finally settling on Buzz Points, a loyalty program that’s tied to a consumer’s debit account.

“We wanted to do something to get our members to not only want a debit card and use it but to think of our card first when they pull one out of their wallets,” says Melissa Wrycha, the Wisconsin-based credit union’s vice president of sales and marketing.

Buzz Points has helped Park City do that and more, according to Wrycha. She says the credit union chose Buzz Points because it builds relationships with businesses in the community and supports the idea of shopping locally. “It’s really tied together our commitment to our community and to our membership.”

Buzz Points begins with the product rewarding account-holding members — who can be opted in automatically or who can opt in themselves — for using their debit cards while shopping locally.

Participants in the program, which is free to consumers, earn points for every debit-card transaction they complete. More are awarded if the transactions are made at one of 7,500 merchants associated with the so-called “Buzz network.” These points can be redeemed for gift cards, cash cards and donations to local non-profits.

“We offer points for every single transaction,” says Buzz Points CEO Jay Valanju, “Whenever accountholders buy something, whether it’s at Walmart or at the local coffee shop, we want them to use our financial-institution partner’s plastic.”

“Accountholders earn points for shopping nationally, but they earn a lot of points — between 4 and 20 times what they do when they’re at a big-box store —for shopping locally,” Valanju adds. “Although we’d love for everyone to only shop locally, the reality is that’s just not going to happen.”

Along with offering shoppers points for using their debit cards, Buzz Points merchants also can offer them digital loyalty cards or coupons, according to Valanju. “From the consumers’ perspective, it’s very simple, as they don’t have to carry a bunch of key fobs or punch cards. All they do is carry and use their debit cards, and we track everything on the back end.”

It seems to be pretty simple from both the perspective of merchants and financial institutions, too. Valanju describes Buzz Points as being “a completely turnkey solution” for both groups: “We do pretty much all of the work for them.”

For merchant clients, who pay about $100 per month to be part of the program, that means Buzz Points provides them with both marketing materials and what Valanju describes as “rich analytics like Google Analytics but for spending information.”

Financial institutions also receive marketing assistance once they’ve signed with Buzz Points. “If you’re a bank or credit union that doesn’t have a big marketing department or a lot of marketing talent — or even if you have all of those things but you’re really busy — we’ll give you a complete marketing kit that’s easy to implement,” Valanju says. “Or you can just use it for inspiration while creating your own materials, but most financial institutions use our kit, though — even the big ones.”

Buzz Points’ marketing assistance encompasses social media, too, according to Valanju, who explains that the company will create and co-brand a Facebook page and a social-media presence for any client that wants it.

Buzz Points also relieves its bank and CU clients of the burden of having to sign up local merchants by holding events — usually breakfasts and the like — during the program’s 90-day launch window. Valanju says during the launch phase they often get a hundred or more merchants signing on at once, “and we continue to work to sign up merchants during the life of the program in each community.”

Merchant and financial institutions alike pay to participate in the Buzz Points program. Valanju says the amount is based on the number of active debit cards at the institution, although he assures that for the vast majority of the company’s credit union and bank clients “we write them a check larger than the one they write us.”

According to Valanju, Buzz Points works with banks and credit unions to get through the growth phase, capping and accruing fees due until the merchant program is fully set up.

“For most of the financial institutions we work with, the program’s fully merchant funded within the first couple of quarters from launch,” Valanju explains. 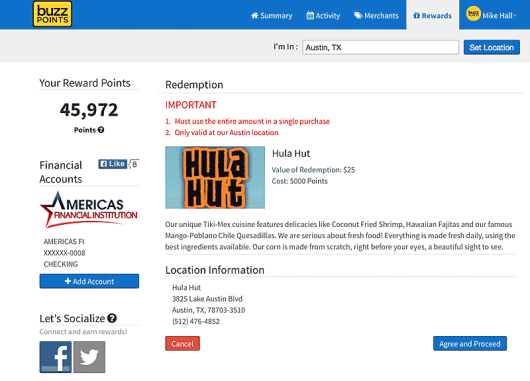 A pair of screenshots showing the Buzz Points interface consumers would see. 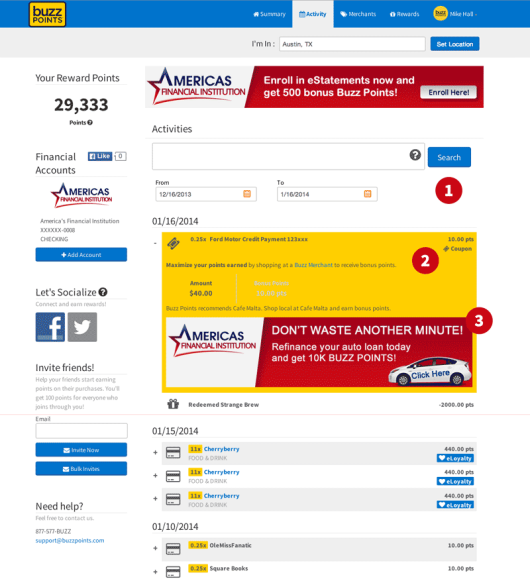 What’s the ROI? About $96 Per Carholder

What kind of return can participating financial institutions expect to see on their investments? For starters, Valanju shares that Buzz Points can help them increase their non-interest fee-based income.

“If you’re a financial institution that’s under $10 billion in assets, you can probably make about $96 per year, per debit cardholder,” Valanju claims. “We can help increase that to about $160 or $180 per user, per year.”

What about larger institutions? “If you’re over $10 billion in assets, you probably make about $54 per year, per debit-card holder, and we can help increase that into the $80 and $90 per-user range.”

Valanju asserts that Buzz Points can help banks and credit unions boost overall spending on their institution’s plastic by 50% or more within two quarters of the product’s launch.

“Buzz Points is the only merchant-funded loyalty program with a focus on Main Street,” Valanju concludes. “By building an ecosystem of community financial institutions and local merchants to engage consumers, Buzz Points creates additional revenue for financial institutions and gives local merchants something in exchange for their interchange fees—a turnkey marketing solution that provides the sophisticated data analysis and technologies they need to expand their market reach, attract new business and increase the loyalty of existing customers.”