Subscribe Now Get The Financial Brand's FREE Email Newsletter
What may seem like a small, and arguably late, step — entering the hotly contested buy now, pay later market — may actually be a big advance toward embedded finance that could affect banks' account growth and card revenues. Here's what banks should know about Apple Pay Later.

Almost a year after Bloomberg broke a story that Apple had built its own buy now, pay later service, lo and behold they rolled it out.

Well, almost. The new product, called Apple Pay Later, is part of the tech giant’s iOS 16 software upgrade, which will officially launch “in the fall,” according to Apple’s announcement at its World Wide Developer Conference. However, that was enough to pound stocks of BNPL providers like Affirm, already under pressure from economic trends.

Should banks and credit unions care about this new product, or is Apple merely a latecomer to a market already well established? Or, as several sources suggest, is this actually a “Hail Mary pass” to jumpstart lagging adoption and use of Apple’s wallet and its Apple Card?

Both may be at least partly true.

But even so the ramifications for banking of Apple Pay Later could be very significant — even threatening — potentially impacting new account growth and credit and debit card transactions. As payment industry consultant Richard Crone observes, Apple has set up its new BNPL product as a “preemptive payment.”

“They’re embedding buy now, pay later, right before checkout,” Crone says in an interview with The Financial Brand. “They’ve embedded a new payment option ahead of all the others that might be in the wallet.” In other words, even if your bank or credit union’s card is in Apple Pay as the default option, the Apple Pay Later choice shows up as an alternative from the get go.

Almost 90% of consumer sales occur in-store. Most BNPL players have yet to nail that market, but Apple Pay Later goes right at it with a user experience that's a plus.

More than that, the way Apple Pay Later is tightly integrated within the Apple Pay wallet and with the Apple Card, creates a platform for additional financial products. One of these, Crone predicts, could be an Apple “decoupled” debit card — i.e. one not issued by a financial institution, but which can link to any checking or savings account via the automated clearing house network.

Also significant, Apple has chosen to underwrite and fund the BNPL loans itself, rather than tapping its Apple Card partner Goldman Sachs or another bank to do that, according to the Wall Street Journal.

Available in the U.S., Apple Pay Later will reside within the Apple Pay mobile wallet on iPhone models 8 and newer. It can be use everywhere Apple Pay is accepted online and in-store, using the Mastercard network. 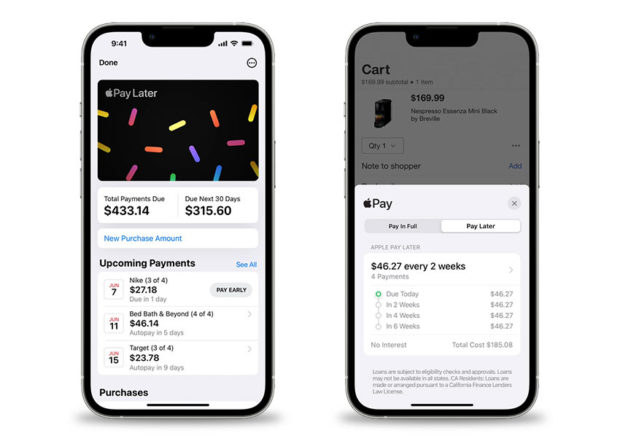 Much like most buy now, pay later products, Apple Pay Later lets consumers split a payment into four equal installments spread over six weeks. There are no fees and no interest is charged. (Apple did not release information regarding what happens if someone is late in making a payment or what it charges merchants.) The plan will max out at $1,000 per transaction, according to the Wall Street Journal, and payments will be automatically deducted from participants’ debit cards.

Read More: How Amazon’s Alliance With Venmo Will Disrupt The Payments Space Forever

A significant feature is that qualified consumers already set up with Apple Pay can apply for Apple Pay Later while they are checking out, whether online or in-store — basically instant issuance. That, according to Crone, gives Apple a huge advantage over existing BNPL players, particularly in physical commerce, which, at 88%, is still, by far, the main avenue of consumer spending.

What that means in practice is that a consumer using Apple Pay at checkout will see the option to pay in four installments on their screen. Simply by clicking that option they are instantly enrolled in Apple Pay Later. There is no credit check. Apple did not explain what constitutes “qualified” customers, but Crone says Apple, working with Goldman Sachs, has a unique data set. “They have the benefit of knowing what debit and credit cards are already enrolled in Apple Pay and what consumers’ payment history is for the Apple Card that’s already in there.”

That data, run through artificial intelligence and machine learning, enables them to instantly provision the BNPL account. Apple  is going to be the only one doing this at scale, the consultant states.

Another feature that sets Apple Pay Later apart is that consumers can track and manage their pay-later activity within the app, with the same kind of transaction visibility and tools used with the virtual Apple Card. This addresses one of the concerns increasingly raised by regulators and consumer advocates — that consumers can easily get themselves in over their heads with multiple BNPL purchases. 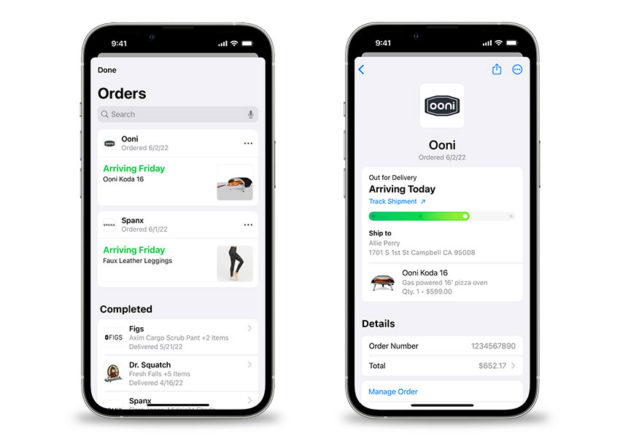 This feature is integrated with Shopify, says Heidi Liebenguth, Managing Partner of Crone Consulting. “It will be a very powerful driver of using Apple Pay for e-commerce purchases,” she observes, an area where Apple lags leader PayPal.

The Apple Hype Universe and Beyond

Apple is a unique combination of a globally dominant corporation and populist proponent of consumer rights. They’re also masters of manipulating the hype machine for maximum advantage.

Not everything they do is a winner, however, and several voices question whether the company’s launch of Apple Pay Later is ill-timed, given the troubles many of the leading buy now, pay later providers, such as Klarna, face.

As the Wall Street Journal observed, “Buy-now-pay-later companies boomed when consumers were flush with cash and buying goods at a feverish pace. How they fare in a downturn, when savings evaporate, spending slows and bad debts mount, is untested.”

But Apple has an edge here. “Unlike its BNPL competitors, such as Klarna and Affirm, Apple has enough cash reserves to finance the project over time,” observes Chris Dinga, Payments Analyst at GlobalData. Its competitors, by contrast, are facing questions about their ability to turn a profit once regulations are introduced. Even if growth slows for buy now, pay later, the service’s inherent appeal isn’t likely to evaporate. Insider Intelligence’s latest forecast for BNPL growth is still robust. 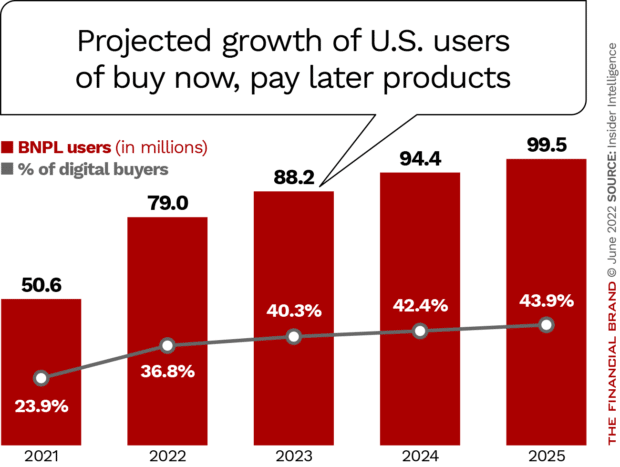 Another point raised by several analysts is that neither use of Apple Pay nor growth of the Apple Card have been that robust — at least after an initial runup, in the case of the card. The company may be looking to Apple Pay Later for a lift.

Apple Pay is the biggest in-store mobile wallet choice with a share of 45.5%, according to Q3 data from PYMNTS.com. However, just 6.1% of consumers who have Apple Pay activated on their iPhones use it in-store to make purchases. 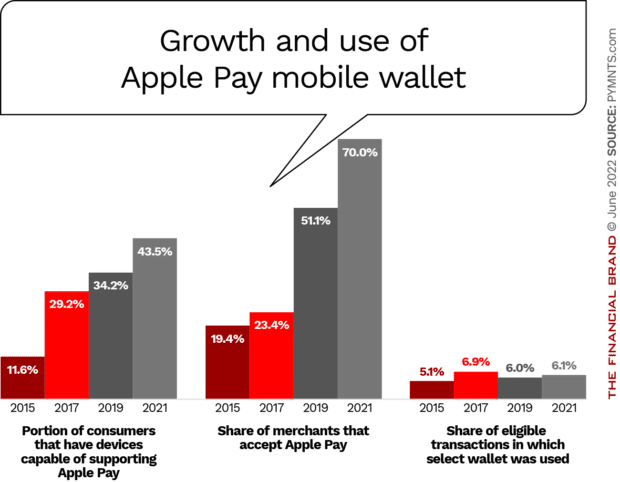 Whether Apple Pay Later can turn that around remains to be seen, but it’s only one part of a growing payments platform being built by the tech giant. At its developer conference presentation, Apple also announced that its Tap to Pay feature is now live. That enables small merchants (or anyone) to accept a payment from the Apple Pay wallet of another iPhone user.

Crone, too, believes the launch of Apple Pay Later will reignite enrollment in the Apple Pay wallet.

Bankers who have any knowledge of decoupled debit cards will likely think of it as a concept that never got much traction. The Merchant Customer Exchange (MCX) was one example. Crone, however, thinks the prospect of debit cards detached from specific financial institutions may be in Apple’s payment plans. And that could have far-reaching impact on traditional institutions.

All Apple Card users must submit the routing and transit number of the account they wish to pay from. The Apple Card bill can only be paid within the app, and payments go through the ACH.

“Decoupled debit will be the ultimate disintermediation of financial institutions. It turns them into a utility.”

That payment information plus all the transaction data Apple and Goldman collect will allow them to assess the risk of issuing a decoupled debit card to people, with the help of AI. The risk is because decoupled debit transactions are cleared “on the back end,” Crone explains, “that is, ‘over the top’ — not going through Visa or Mastercard, but through the ACH.”

The reason earlier efforts at decoupled debit failed, says Crone, is they couldn’t do instant issue and couldn’t mitigate the risk of over-the-top ACH transactions. Apple will be able to do that with the data they have plus AI.

He hypothesizes that in the future Apple Pay might prompt the customer with this question: “Would you like to pay for this purchase using the checking account that you use to pay off the Apple Card or would you like an Apple debit card?”

“I don’t see any hurdles from keeping them from doing it,” says Crone. “It’s just a matter of time. If Apple is able to pull it off, it will be the ultimate disintermediation of financial institutions. [Decoupled debit] turns them into the utility of processing accounts with none of the upside.”

“This is why Apple Pay Later is such a big announcement,” the consultant believes. “It’s just a small step for much bigger things to come.”