Subscribe Now Get The Financial Brand's FREE Email Newsletter
BNPL shows no sign of slowing down, with rising popularity among consumers and giant companies entering the space. The fast-changing dynamic could bring traditional institutions more into the mix, but how long will the good times last?

If the Buy Now, Pay Later (BNPL) craze is a bubble, it doesn’t show any signs of bursting anytime soon.

There are some who label the meteoric rise of BNPL as a mere fad, powered by younger consumers who want to buy things they can’t afford. In a Forbes blog, Alan McIntyre, Senior Industry Director, Banking, for Accenture addresses some of the wider skepticism around BNPL, positing that there is a “risk that BNPL is simply goosing retail sales and encouraging buyers to over-extend themselves. Because the loans are not secured, just like a credit card, there’s nothing to stop a consumer from racking up balances with multiple services, apart from the limited credit underwriting that these services perform.

McIntyre points out that while there are no interest charges or fees for most BNPL loans routinely, fees and charges frequently kick in for missing a payment. “All of which adds up to the potential for abuse, just like the revolving credit that Millennials may be using BNPL to escape.”

A Heavyweight Joins the Party

But so far such potential for abuse has not slaked the appetite of consumers for using these products, nor of financial services companies offering them. Quite the opposite. Mastercard became the latest mainstream financial firm to get in the BNPL game, announcing that it is launching a product called Installments, a point-of-sale financing program to be available in the U.S., U.K. and Australia.

The payments giant is partnering with several other institutions on the project, including Barclays, Fifth Third Bank, SoFi and others. Mastercard plans to use open banking technology to access customer data to make POS financing decisions. The company says the service is “coming soon,” although no formal launch date was announced.

In the announcement, Craig Vosburg, chief product officer, for Mastercard, says that Installments is “built on our guiding principles to protect consumers and enable choice without sacrificing trust and security. It is a digital-focused way to pay today and tomorrow, delivered through consumer’s most trusted relationships with their banks and other lenders, at merchants of their choice.”

Mastercard is the latest major financial services company to join the BNPL craze.

This is just the latest move in the BNPL frenzy. In 2021 alone, market leader Affirm engaged in a partnership with Apple and an alliance with Amazon, while Klarna, the original BNPL fintech, raised more than $600 million from Softbank. Square over the summer purchased BNPL firm Afterpay for $29 billion, and Goldman Sachs announced it is acquiring home improvement BNPL lender GreenSky.

Read More: Credit-Hungry Americans Like BNPL, Cards (and Whatever’s Next)

Visa had already thrown its hat into the ring with a product also called Installments, oddly enough. In August Visa partnered with payments processor i2c to expand POS capabilities for Visa Installments. No doubt there will be more action ahead.

As previously reported in The Financial Brand, 27% more consumers said they’ve used a BNPL service in 2021 compared to 2020; and 78% of BNPL users said they plan to use it more in the future. 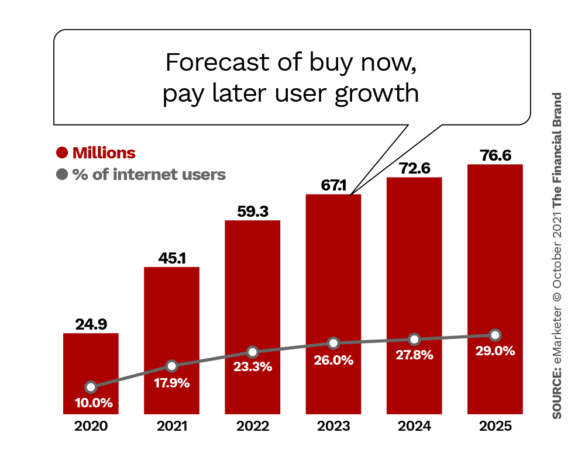 Though Mastercard is somewhat late to the BNPL game, it poses a significant threat to the fintechs that currently dominate the space, since it operates the payments system that they rely on.

An analysis from Business Insider notes that “even though Mastercard’s program could let these players use its rails, pressure from payments giants could squeeze [fintech BNPL providers] and make the space even more competitive, especially in the face of increasing consolidation. These giants might also have an edge in attracting older demographics, where BNPL has far less penetration, by relying on their brands and familiarity to ease consumer concerns.”

Mastercard EVP Chiro Aikat told Business Insider that the company’s goal with Installments was to “network-size BNPL and leverage the power of our network to bring scale.”

Furthermore, many of the fintech BNPL players have agreements with certain merchants, meaning consumers are limited in where they can use those POS financing options. Mastercard Installments will be available anywhere using the company’s vast merchant network. The company said in its product announcement that Installments will be available to any of its merchant base with “minimal, simple integration” and that “Digital wallets and BNPL players can easily integrate Mastercard Installments’ APIs and deploy the solution to consumers and already integrated merchants.”

Such terminology may indicate that Mastercard has designs on being the prominent BNPL provider that any third-party can easily integrate into.

With its vast merchant network and infrastructure, Mastercard has the potential to dominate BNPL.

Mastercard in the press release also touted the programs’ “zero liability fraud protection” which it claims most other BNPL services do not currently offer. According to NerdWallet, this means that consumers “won’t be on the hook for the cost of any fraudulent transactions. You can also dispute charges directly through Mastercard.”

Smooth Sailing or Troubled Waters Ahead?

As noted above, despite — or rather because of — the surging enthusiasm for BNPL services among both consumers and financial services companies, some observers are sounding concerns around this growing trend. One particular complaint lodged against BNPL services is that they are not much different than the credit cards that consumers are ditching in favor of them.

Ted Rossman, a senior industry analyst at Creditcards.com told CBS News that “Many consumers are drawn to the instant gratification, easy access and predictable installments [of BNPL products.] The line between credit cards and buy now pay later is getting increasingly blurry. For example, Mastercard’s new offering works with digital wallets and on retailers’ websites.”

In a blog post that could foretell future regulatory action, the Consumer Financial Protection Bureau advises consumers that they should understand the benefits and risks that come with BNPL.

“While many BNPL companies don’t charge interest, most do charge late fees if you miss a payment,” the agency advises. “In addition, you could be blocked from future purchases until you make past payments and could even have your debt sent to a debt collector if you fail to repay.” CFPB adds that BNPL loans currently lack the consumer protections that apply to credit cards, such as dispute protection.

For providers of BNPL services there are also headwinds to consider. Fintech executive Safwan Zaheer, writing in The Financial Brand notes that there is a potential profitability issue, as lenders make less than half the profit with BNPL compared with a traditional installment loan of the same amount.

For now though, it seems consumers and financial firms can’t get enough of BNPL.