Subscribe Now Get The Financial Brand's FREE Email Newsletter
If any payments trend could be said to have 'gone viral,' it would be buy now, pay later. Here are top BNPL trends and statistics, including what people are buying using the fast-growing platform, how much they're buying, generational breakouts of who uses BNPL the most and more.

The number of U.S. buy now, pay later users is projected to soar from 1.6 million in 2018 to 59.3 million in 2022, driven by innovations in credit access and purchase flexibility. Growth will likely taper through 2025, however, as BNPL enters a post-regulation maturity phase.1

BNPL offerings will account for an impressive $680 billion in transaction volume worldwide in 2025.2

BNPL payments are expected to account for nearly a quarter of all global ecommerce transactions by 2026, up from just 9% in 2021.5

“Banks have let fintechs take the lead in the BNPL space – challenging their dominance will not be easy. But, with this new form of POS financing only growing in popularity with both customers and merchants, banks will need to consider their own position in this growing market, or risk losing further revenue and market share.”

Why Customers Buy With BNPL

The most common reason to use buy now, pay later services is to make purchases that don’t fit in one’s budget — 45% of respondents have used it for this reason.6 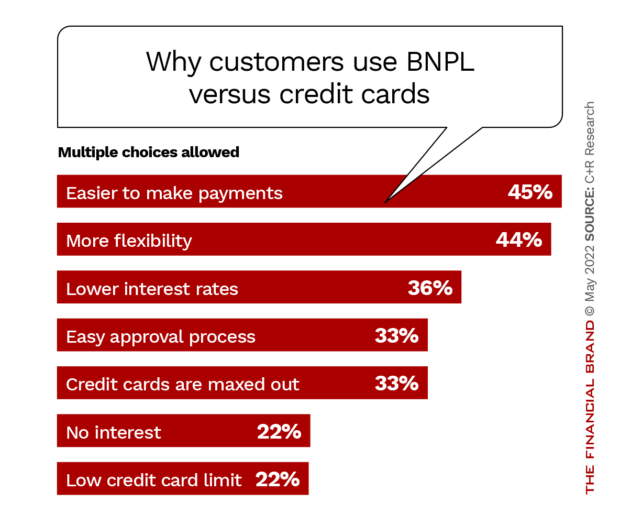 Buying electronics is the most common use of buy now, pay later, with nearly half (48%) of BNPL users saying they’ve used it for that reason.6 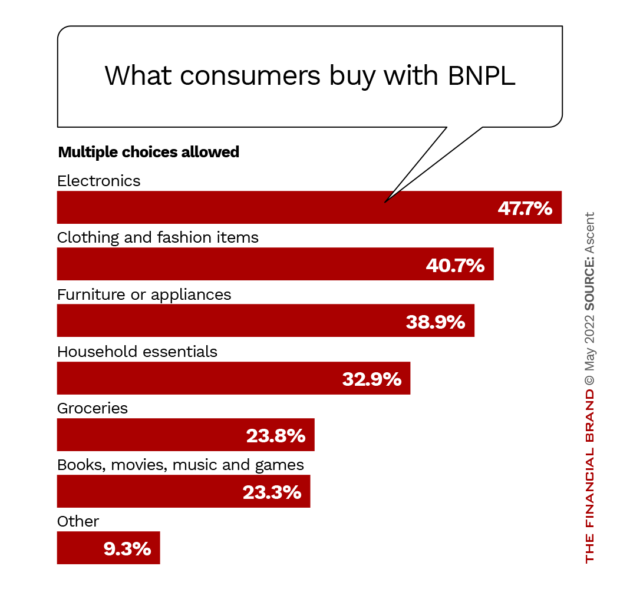 71% of Americans who visit the dentist frequently would use BNPL over traditional payment methods.7

86% of pet owners would choose BNPL in place of traditional payment methods to help pay for future vet costs.7

Read More: BNPL Is Now Officially Mainstream: What It Means for Lenders

How Often People Turn to BNPL

Two in three Americans are more interested in BNPL in 2022 than before the pandemic.7

Of consumers who use BNPL services, nearly three out of ten people (29%) use it at least once a month. 51% of people use buy now, pay later services once every three to six months.8 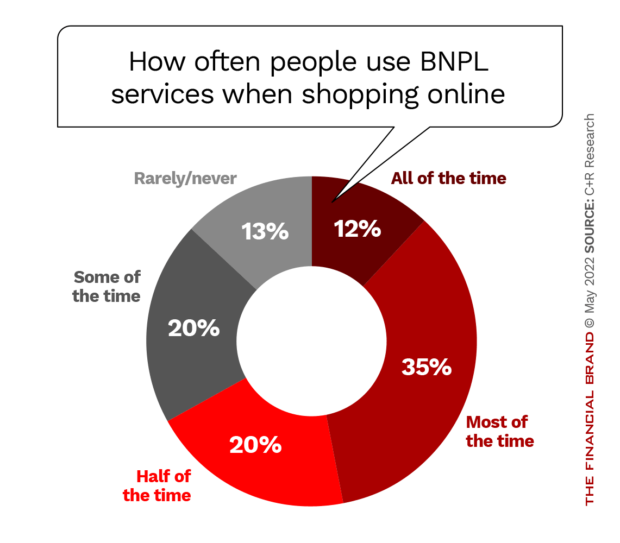 Of people who use BNPL, over two thirds (67%) use BNPL when shopping online at least half the time.8

53% of respondents who have never used buy now, pay later say they’re at least somewhat likely to use it within the next year.6

The Dark Side of BNPL

More than half (57%) of people say they regretted making a purchase through BNPL because the item was too expensive.8

31% of buy now, pay later users have made a late payment or incurred a late fee. Over one third (36%) of BNPL users say they are at least somewhat likely to make a late payment within the next year.6

Over half of BNPL users have fallen behind on at least one BNPL payment.8

One out of ten customers of one major bank who used BNPL for the first time were already in arrears.9

Late fees on BNPL services range from $5 to $10 and are sometimes capped at 25% of the order value, depending on the company.10

Read More: Why Consumers Don’t Think BNPL Is ‘Debt’ (and Why It Matters)

A Deeper Look Into the Consumers Using BNPL

The average amount of the last item BNPL users purchased was $689.8

People don’t open buy now, pay later contracts one at a time. Any one BNPL user is paying for an average of four items (3.8) at any given time.8 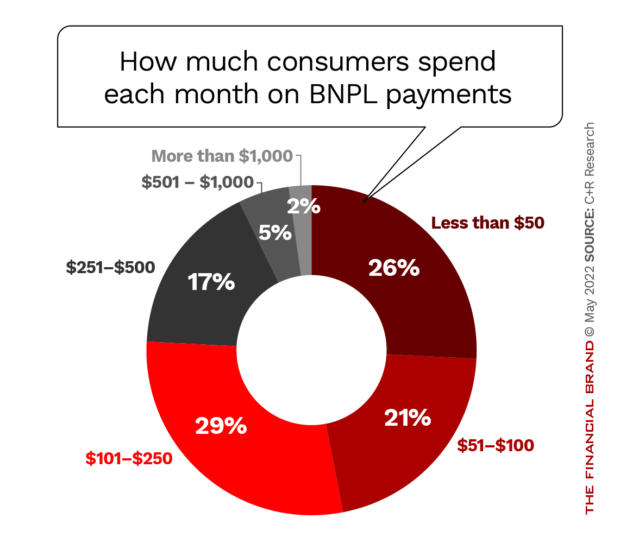 61% of buy now, pay later users would rather use a BNPL service offered directly from the retailer they’re buying from than go through a third party.6 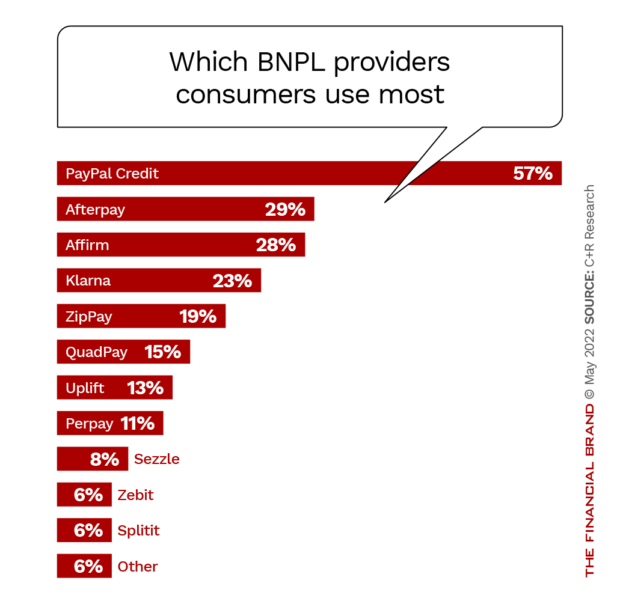 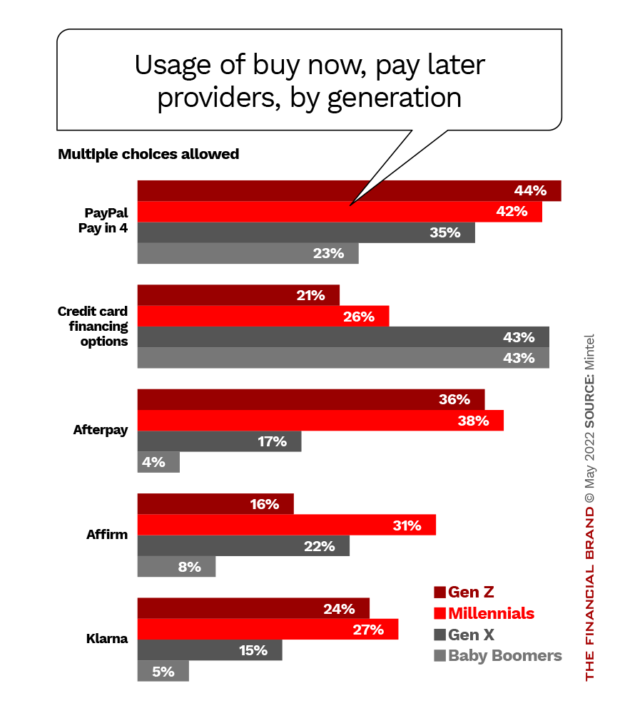 “The time is right for banks to enter the BNPL market, but having the right market entry strategy and business model is key to succeeding. Banks are experienced in regulatory compliance and credit underwriting and have the data and customer base to compete in this space.”