Subscribe Now Get The Financial Brand's FREE Email Newsletter
Buy now, pay later plans keep growing more and more popular but new data from a major survey suggests current BNPL lenders and those who would join the fray must weigh the impact of this inclusive credit carefully. Poor decisions made now could reverberate if inflation worsens... and if the economy falters.

Specifically, 18% of the vulnerable households in a survey of just over 5,000 U.S. respondents use BNPL, versus only 5% of financially healthy households. FHN’s FinHealth Score program defines “financially vulnerable” as struggling to spend, save, borrow and plan.

In addition, nearly a quarter (24%) of financially vulnerable BNPL users have had trouble paying off these loans. Only 8% of the people in the overall study sample who have used BNPL plans report having had difficulty making payments.

61% of financially vulnerable consumers say that if BNPL service had not been available, they would not have made a purchase.

Over the entire sample, almost half (46%) of those people who have used BNPL plans have done so three or more times in the 12 months previous to November 2021.

Here’s why these findings matter: More and more lenders are considering launching into one form or another of buy now, pay later credit. Yet in some ways it remains uncharted territory compared to traditional forms of consumer credit.

On one hand, banks and credit unions don’t have the same radar on overall indebtedness they do on traditional credits because the three major credit bureaus are only beginning to capture BNPL data. Each of the three bureaus are approaching the challenge differently, too.

Conversely, BNPL lenders may not know how extensively one of their users is also using rival buy now, pay later lenders.

BNPL's popularity was aided by pandemic ecommerce spending and then a booming economy. Now BNPL faces inflation and high energy prices... and some are talking about a recession.

The study found that about 10% of the consumers sampled had used BNPL, which is lower than the rate that some other research has reported. (70% of the BNPL loans taken out were the short-term, no-interest types, such as the popular “pay-in-four” plans.)

FHN officials suggest the 10% figure may be because the study’s field phase concluded just before the traditional Thanksgiving shopping rush, where PayPal alone saw a surge of nearly 400% in BNPL use year over the year. The study report notes that “during the 2021 holiday season BNPL was nearly ubiquitous at online retailers.”

BNPL Survey Findings: A Mix of Pros and Cons for Lenders

The results of the BNPL study — a subset of FHN’s forthcoming “FinHealth Spend Report” — represent a mixed bag, according to FHN’s Rob Levy, Vice President, Research.

“We saw some really great numbers, in terms of 92% of BNPL users saying they had no difficulty making payments and 99% of users saying they felt that they understood the terms and conditions of the BNPL service,” says Levy in an interview with The Financial Brand.

“For a brand-new product, that’s pretty remarkable, in my book,” observes Levy. He says these numbers indicate that these products are being communicated and disclosed well enough that consumers say they understand their obligations. 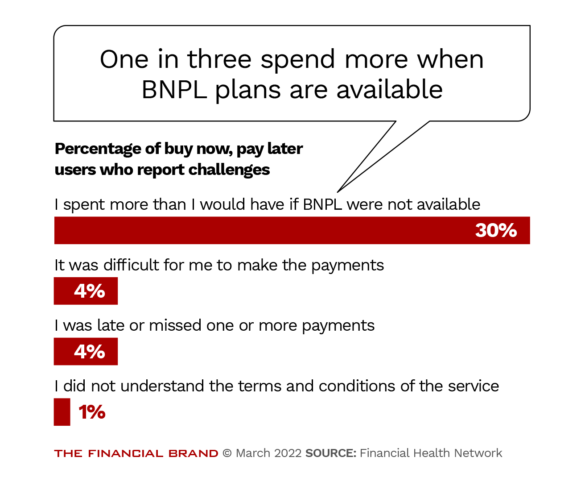 “That’s a promising sign, though it doesn’t mean that lenders should let up in terms of being super-clear about the structure of the product and how it works,” says Levy. “But it means that we’re starting from a good place.”

All that acknowledged, Levy says the research contains red flags that all consumer lenders must weigh. The fact that 24% of financially vulnerable consumers have had trouble repaying BNPL loans is worrisome, says Levy.

“There is a history in the financial services market of new products coming into the ecosystem and working well for most people, but having really damaging effects on those most in trouble. And that’s what we have to watch out for with BNPL.”

As the chart above shows, the study found that nearly a third of the sample overall admit that they spend more when a merchant makes buy now, pay later service available.

“The financially vulnerable consumer has the most to manage, living paycheck to paycheck. So when will there be a tipping point where they really get into trouble?” says Levy. “That’s what we all have to watch out for. Every bank and BNPL provider offering these plans has a responsibility to ensure that their customers are using BNPL successfully and not making their financial health worse.”

Two key data points: The survey found that 43% of BNPL users have subprime credit scores. By comparison, only 24% of nonusers had subprime scores.

Incorporating BNPL Data in Credit Scores Is a Plus, But Can’t Be Rushed

Levy expects the credit bureaus’ BNPL plans will help keep the new product from becoming a problem for more borrowers. However, he says building those records will take time, and notes that companies that maintain credit scoring models are still evaluating how they will blend BNPL data into their formulas.

“On one hand, lenders should be incorporating this data into lending decisions as soon as possible so consumers don’t get into trouble,” says Levy. This applies not only to BNPL lenders but to other lenders extending credit to BNPL users, such as credit card issuers.

“At the same time,” Levy continues, “you don’t want to rush into bringing BNPL data into credit bureau files without understanding how it impacts consumer credit performance. This product is so new that it would be foolish to rush that.”

All this said, Levy notes that lenders will have to be willing to evaluate the BNPL data once it becomes available in usable form. Their view of potential borrowers could change, especially in a recessionary environment.

BNPL vs. Credit Card Usage… and the Impact of Rates

The fact that users say they spend more because BNPL is available and that one out of three of the overall sample would not make the purchase at all if they could not use BNPL concerns FHN.

“If BNPL induces consumers to overspend their budget and take on net additional debt, even at 0% interest, this could have a negative impact on savings, borrowing, and ultimately financial health,” the report states.

Putting a Number on BNPL Spending:

Users of the short-term, no interest type of BNPL plans reported an average of $330 in buy now, pay later debt at the time of FHN's survey.

The above finding suggests that users turn to this type of BNPL plan “to smooth out the cost of low- to mid-range purchases, rather than to purchase big-ticket items like appliances and furniture,” the report states. In this way, it continues, “BNPL may act as a stand-in for credit or debit card purchases.” 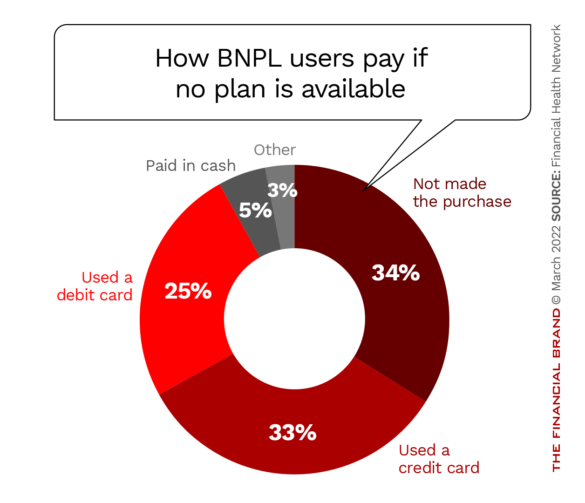 The 34% figure in the chart above suggests to FHN that buy now, pay later availability may be prompting purchases or additional spending beyond a person’s normal spending levels.

Usage of the buy now, pay later plans is strongest among younger people, especially 18-25 year olds, 20% of whom told FHN researchers that they use BNPL credit. Usage falls the older consumers get, according to survey findings. This may reflect that it may be easier for older consumers with more credit history to obtain credit cards than for young consumers.

The study found that buy now, pay later users are more likely to have outstanding credit card debt: 77% of users with cards reported having a balance on their credit cards. By contrast, only 49% of nonusers carried balances.

Levy says the role for credit cards versus BNPL could be influenced by rising rates.

“Credit card rate levels will go up as interest rates rise,” says Levy. Could this be a turning point on its own?

Whether 0% BNPL pricing, subsidized by merchants to make more sales, survives rising rates remains to be seen. If 0% hangs on, Levy suggests there could be a further shift towards BNPL.

Inflation may also influence growth of BNPL as the costs of goods rise. If prices go up appreciably, he says, “consumers are going to need and want more time to pay them off. But we have to keep an eye on the overall financial impact on their lives.”