Subscribe Now Get The Financial Brand's FREE Email Newsletter
Citizens Pay is both a payment vehicle as well as a financing method that looks more like an installment loan than the typical fintech BNPL pay-in-four program. While fintech players face challenges, Citizens Bank enjoys the perks of a bank charter.

The travails of several fintech buy now, pay later companies have thrown a shadow on the future of this form of borrowing but the obituaries for BNPL are being written too soon. For banking companies, at least, the best opportunities in BNPL may be yet to come.

First, BNPL isn’t all one thing by any means, so sweeping judgments should be avoided. Second, consumer lenders are facing changing consumer attitudes towards credit as inflation continues to bite and threats of recession cause increasing worry. This and other trends may favor financing techniques beyond the traditional BNPL menu.

“I see the BNPL space continuing to grow,” says Sethi, an alumnus of JPMorgan Chase and Capital One. “I don’t anticipate buy now, pay later becoming the size of the credit card business in the next five years. So it is not a replacement for credit cards. But you can’t ignore the growth rates. We’re talking about single-digit growth rates for cards versus higher growth for BNPL. Depending on how you define BNPL it is growing at a clip of 20%-plus.”

One factor that’s applied all the way through BNPL’s growth is the appeal it offers retailers, who have seen it as a strong way of offering an attractive financing method that can be used both online and offline to boost sales. But more recently Sethi sees consumers becoming more careful about credit.

“Folks don’t want to get into debt. But they don’t mind borrowing.”

By contrast, he continues, “accidental debt” consists of actions like unconstrained credit card spending that goes on until the consumer can no longer cover the full payment. This leads to total indebtedness that consumers have trouble tracking, let alone managing.

Installment payments aren’t new, but BNPL fits a time when people are becoming more focused on their budgets, according to Sethi.

People are used to thinking in monthly cycles. “Look at mortgages, look at auto loans,” says Sethi. “They are both structured in monthly payments and offer predictability of what consumers must pay. I think that model is going to become more entrenched in U.S. culture.”

Citizens is unusual among major U.S. banks in that it has been offering its own take on BNPL since 2015. While the major fintech BNPL companies have focused on a mass-market approach on both sides — courting large numbers of consumers and large numbers of merchants with the “magic” of 0% financing —Citizens Pay has been offered on a more select, strategic basis, tailored to individual mass retailers and differing from the fintech players in significant ways. (The bank adopted the Citizens Pay branding for its BNPL effort in early 2021.)

Sethi says the Citizens Pay customer base so far has been measured in dozens of retailers, not hundreds or thousands, and that gradual progression has been intentional. Today Citizens Pay serves over 7.5 million consumers at point of sale and online through participating merchants and, as of June 2022, has originated more than $9.5 billion in loans since its introduction.

“Fundamentally, our business model is to support larger enterprise partners with more sophisticated BNPL offerings,” says Sethi. “By its nature, you’re not going to be able to provide that level of sophistication to 10,000 merchants. If your business model is to partner with 100,000 merchants, what you offer has to be a pretty standard plug-and-play product, which is the traditional fintech BNPL approach.”

Each BNPL program that Citizens sets up differs according to the needs of the partner and the consumers it serves. The first Citizen Pay merchant program was with Apple, which still continues. The partnership created a program that enabled iPhone buyers to finance their purchases through a 24-month installment loan. A kicker is that after 12 months the buyer/borrower can turn in their original purchase for a new iPhone. 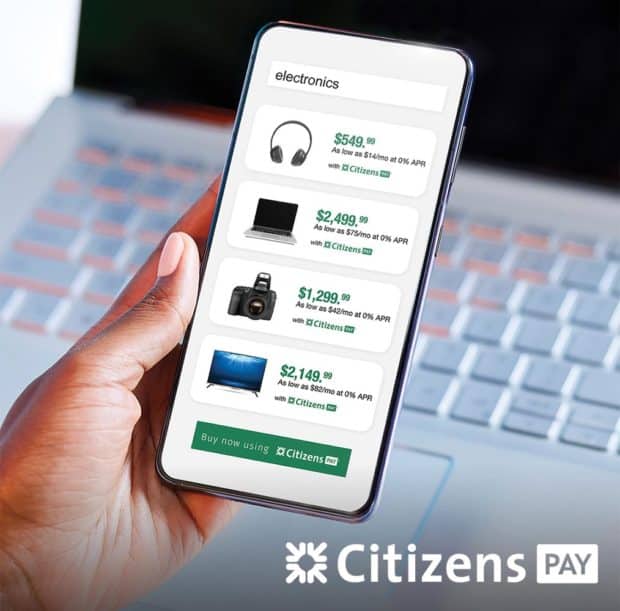 Unlike most BNPL programs, Citizens Pay varies by merchant. Some arrangements provide for 0% financing, others charge interest. It all depends on what the merchant wants to offer.

Part of what sets apart Citizens Pay from other BNPL providers is transaction size.

“We are atypical in the sense that we are not a small- ticket lender and we are not a one-size-fits-all lender,” Sethi explains. The program’s sweet spot for purchases lies in the range of $500 to $5,000, with the top end rising as high as $25,000 for certain industry verticals. The key range for payment plans is between three months and 60 months. Some programs are designed like a blend of line of credit and installment loan, enabling consumers to be approved for multiple purchases.

“We’re not looking to finance purchases for $100 or less, transactions that require only a handful of payments, such as small-dollar financing for apparel,” explains Sethi.

Citizens Bank’s approach differs in multiple ways from that of fintechs because it is a bank, with a traditional deposit funding model.

“We are definitely a balance sheet credit provider versus the fintechs, which have to offload their balances,” says Sethi. The ability to fund BNPL through deposits gives Citizens critical flexibility that fintech players lack, he explains.

Managing BNPL When the Cost of Money is Rising

As rates rise, it may become more difficult for fintech BNPL players and their participating merchants to continue to provide 0% financing.

“In a rising-rate environment, the cost of funds for a lender goes up and it’s disproportionately higher if you don’t originate your own deposits,” says Sethi.

With its lower cost of funds, Citizens is able to pass on that value back to either the merchant or to the consumer. Ultimately, Sethi explains, all BNPL services entail a three-sided equation — merchant, lender and consumer — and someone pays the cost of money.

Sethi thinks banks in BNPL have an advantage not only because of their funding advantage but also because they have had more experience weathering economic cycles. In addition, they have had longer experience handling the inevitable losses that come with a faltering economy. That, plus a greater depth of data on consumer behavior.

Something that sets apart Citizens Pay from fintech BNPL is the role of credit bureaus. While the bureaus have been adapting to the advent of fintech BNPL, the fintechs have resisted falling in line with traditional lenders. A key selling point for some of the providers has been that they don’t underwrite BNPL credit and that they do nothing with the bureaus beyond a “soft” credit check and that they don’t report to bureaus. People who have had credit trouble like that feature.

Sethi says Citizens considers use of bureaus and calculation of ability to pay to be fundamental to the way a bank lends. The process, as designed for Citizens Pay, takes seconds both online and at point of sale, but it’s in there, both checking credit files and determining if the purchaser can afford the credit.

Credit processes may be part of what the Consumer Financial Protection Bureau acts on once its pending review of fintech BNPL programs concludes.

“We would welcome a level playing field,” says Sethi. “You want to make sure that the consumer is at the heart of this and that they are not being harmed. We are already a step ahead.” He adds that the bank has been following compliance and disclosure requirements all along, aspects of which fintech BNPL firms may not be following. CFPB could change that.

Meanwhile, Citizens continues with its own agenda. Sethi says further expansion is coming for Citizens Pay. Part of this will involve new verticals beyond the ones that the program has focused on in the past. Another aspect of the expansion will involve blending BNPL service with other innovative approaches to commerce, such as the movement towards subscription-based purchasing.