Subscribe Now Get The Financial Brand's FREE Email Newsletter
Feeling pressure from fintech providers First National Bank of Omaha, a top U.S. credit card issuer and a leader in co-branded cards, has jumped into merchant-based buy now, pay later lending. If a conservative company like FNBO pioneers this move, the clock may be ticking for other card issuers to plunge in.

Buy now, pay later credit grows increasingly hot, making it easy to dismiss these installment payment plans as a fad. But when a bank known for its conservative approach to business moves into this specialty, among only a handful of traditional institutions willing to challenge fintechs in the merchant-BNPL business, other financial institutions have to take notice.

First National Bank of Omaha, one of the top 25 credit card issuers in the U.S., has launched “Slice by FNBO,” a buy now, pay later program that merchants can offer to online consumers. While the basic program the bank is offering is a “pay in five” deal — one slice up front and four more every 15 days — the intent is to tailor the plans to merchants’ needs and to the specific types of goods or services they offer.

The move also marked an atypical strategy for the bank’s First Bankcard operation. In order to speed along the offering to merchants, the bank partnered with EXL, a data analytics company, and Skeps, a point of sale loan origination platform. Usually the division prefers to develop new programs on its own.

Two factors spurred FNBO’s high-profile move into the BNPL fray: 1. Statistics indicating that about 50% of Americans have tried BNPL at least once, and 2. its huge popularity among younger consumers, especially Generation Z.

Jerry O’Flanagan, Executive Vice President of FNBO’s Partner Customer Segment, says the effort began as a defensive strategy to help the bank mitigate erosion of its credit card assets. Many observers point out that BNPL hasn’t been through an entire business cycle in the U.S. and that some consumers have gotten into trouble. However, O’Flanagan says “we don’t view it necessarily as going too far ‘out over our skis’ in risk appetite.”

He points out that financial risk is only one consideration for FNBO as a card issuer. There’s also the risk of losing share of payments, and, in time, customers.

“There’s a component of buy now, pay later that attracts a younger demographic, so this new program is good for us, to be honest. We have a rather old portfolio — our average age is in the 50s. “

In addition, says O’Flanagan, “We need to grow better at building great customer experiences, and if we’re good at this, it can be a feeder for our credit card business as well.

O’Flanagan, a card industry veteran, admits that when he first heard about BNPL at a 2017 Visa conference, he was skeptical about an “oddity” catching on in the U.S.

“Our payment apparatus, especially where it involves retailers, is so predicated on rewards and credit cards,” says O’Flanagan, “and I just couldn’t see it taking hold.” But as the Affirms and Klarnas of the BNPL business grew exponentially, his attitude changed. What firms like those have done in a short space, he says, “is just remarkable.”

And then, the need to play defense arose. FNBO issues branded credit cards on behalf of many retailers.

“Our customers were getting sales calls from the BNPL outfits and they were asking us, ‘Do you have a BNPL solution?'”

The bank got busy developing the core product, “and we tripled down on spending to improve the customer’s digital experience,” says O’Flanagan. “We need to grow better at building great customer experiences, and if we’re good at this it can be a feeder for our credit card business as well.”

“Only a few banks are responding fast enough and boldly enough to compete” in BNPL, McKinsey authors wrote in a mid-2021 review of the forms the programs can take. “Banks that underestimate the threat may see continued loss in share and could lose out on participating in a growing value pool and gaining share among younger and new-to-credit customers, as banks in Australia and China did when facing a similar situation.”

The type of program stirring up the most publicity follows this pattern: The merchant offers BNPL as an option for payment. The credit is free, that is, there is no explicit interest charge for the installments and no fees, so long as the consumer pays on time. The lender behind the program receives interest, of course, but this is paid by the merchant. The idea is that subsidizing credit sales will be counterbalanced by consumers buying more, which has so far proven to be the case.

Other forms of BNPL exist. For example, Chase, American Express and Citibank offer the ability to set up payment plans on credit card purchases, for a fee in lieu of interest. In its report McKinsey said that for this type of program “adoption rates have stayed low. In the United States, these post-purchase installments cannot compete with the 0% APR solutions.” The report notes that merchant-subsidized offers using these programs could increase volume.

FNBO joins a handful of bank providers that have ventured into the merchant-based BNPL field. One example is Citizens Bank, which offers Citizens Pay.

Visa is piloting a card-based BNPL offering in the U.S., while it has expanded efforts in Canada. Mastercard has launched Mastercard Installments, which permit consumers to access either pre-approved BNPL credit through their lender’s mobile app, or at checkout through instant approval. This program will initially launch in partnership with five U.S. banks and other participating companies. The five are Barclays US, Fifth Third, Huntington National Bank, SoFi Bank and Synchrony.

How FNBO Will Move into Competitive BNPL Space

Given that the launch is intended initially as an aggressive defensive move, O’Flanagan says the company is proceeding deliberately and carefully.

“I was most interested first to make sure we protected our franchise,” explains O’Flanagan. “We will see if this category of lending stands the test of time. I want to be sure all these loans behave, and that we provide a good customer experience.”

Initially, he says, FNBO will offer BNPL to the companies for which it issues co-branded cards and other card services. In addition, to avoid cannibalizing the bank’s card business, it has built in the capability to offer the BNPL option on merchant sites only to consumers who don’t have FNBO-issued cards. 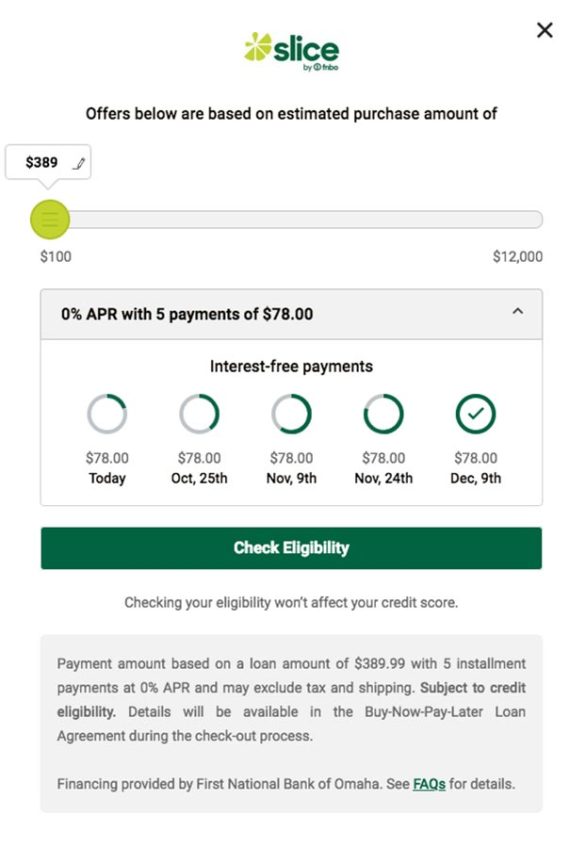 If the new effort pans out, O’Flanagan states, FNBO will begin marketing its program to retailers who don’t already have a relationship with the bank.

The first program out of the gate is with Scheels, an employee-owned sports equipment and clothing chain that will begin by offering Slice on its website. (FNBO issues the Scheels Mastercard and Visa store cards, as well as secured-card variants.)

While the program is identified on the site by name, O’Flanagan says the bank is willing to offer BNPL as a white-label service for merchants who want to promote “their own” installment payment option.

Where Bank-Run BNPL May Fit In

O’Flanagan says it’s possible that bank-offered merchant BNPL could in time replace store cards. While merchant programs will be fitted to their needs, O’Flanagan thinks the longer-term plans that FNBO is willing to work up likely make a better fit for industries with longer-term needs. That would include home improvement and health care, he says.

However, he doesn’t think BNPL will replace all credit cards. They will instead serve as a proving ground for credit newcomers who can prove themselves through BNPL and then qualify for credit cards. While zero interest programs are a great deal for consumers, he says, there are needs that credit cards fulfill as well.

(O’Flanagan also told The Financial Brand that FNBO is working on an embedded banking play he calls “credit card as a service” that can be presented in multiple forms for ecommerce firms that want to run their own credit operation.)

Some BNPL programs are sold by fintechs on the basis that the providers will not report such borrowing to credit bureaus. O’Flanagan doesn’t believe that’s a good idea for the consumer nor the industry.

And he also doesn’t buy the implied motive.

Call it personal experience. He says FNBO has an extensive secured card effort for people trying to rebuild credit, and, in keeping with that purpose, it reports performance to the credit bureaus.

In fact, he says, “as soon as those consumers make a few payments, they get picked off by competitors,” says O’Flanagan. “So I understand why a BNPL company doesn’t want to report to the bureaus. They want to keep the customer and grow the customer themselves.”

O’Flanagan believes not reporting BNPL performance to credit bureaus may be a ticking time bomb for fair-lending compliance. He think’s traditional financial institutions’ extensive experience in compliance will be a key advantage as agencies’ focus sharpens.

“The regulators have their eye on this in a big way,” says O’Flanagan. “CFPB and the other regulators are going to have a lot to say about these programs.”