Subscribe Now Get The Financial Brand's FREE Email Newsletter
Many observers believe that 150+ Buy Now, Pay Later providers is unsustainable, and that Square's $29-billion acquisition of Afterpay could mark the speedup of a consolidation trend. That would give banks and credit unions additional options for getting into the red-hot market.

Consumers love Buy Now, Pay Later, and the wave of its popularity shows no sign of slowing down. New fintech entrants continue to get into the BNPL game, while established players scramble to offer their own BNPL services.

One estimate pegs the number of BNPL providers currently existing today at 170. But will there be room for all these (and more) in the future, or will the BNPL space consolidate around a few winners?

“I don’t see the status quo remaining in the long term,” says Alex Johnson, director of fintech research for Cornerstone Advisors, in an interview with The Financial Brand.

“The checkout page on a lot of ecommerce sites looks a lot like a NASCAR vehicle, there are so many BNPL logos on there.”

This is a trend that already has begun. The $29 billion acquisition of Afterpay by Square (now Block), announced in August and approved by shareholders of both companies, could be the first trickling of a waterfall. 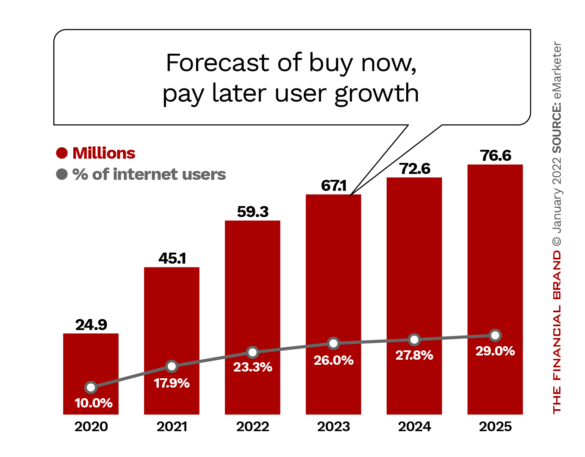 There are a couple of different paths BNPL can take, says Johnson. One could be the “commoditization” of BNPL wherein it becomes a product type that banks, card networks and other established financial institutions offer, similar to lending products or credit cards now.

Another possibility is that the bigger BNPL players, such as Affirm, Klarna and Afterpay could snatch up many of the smaller BNPL platforms.

“There’s limited real estate for all these BNPL platforms trying to get integrated into merchants,” Johnson says. “There are not many ‘blue ocean’ opportunities left.”

The larger BNPL platforms are running out of ways to grow organically through merchant partnerships, and may start to look to grow more aggressively through acquisitions, Johnson notes.

Read More: 14 Surprising Predictions on the Future of Banking

This future could be similar to how car rental companies currently operate, where the major players each operate several sub-brands, observes Ruby Walia, Senior Advisor for Digital Banking at Mobiquity in an interview. For example, Hertz owns Thrifty and Dollar, Avis owns Budget, Zipcar, and Payless, and Enterprise operates the National and Alamo brands.

“As BNPL matures, it’s likely there will be consolidation with the smaller players either getting
acquired or going out of business,” says Walia.

As this happens, the major BNPL players could establish themselves in different niches.

“AfterPay is different enough that I think it will survive as a consumer brand under the Square
Umbrella,” says Walia. “I especially like their approach of acquiring consumer customers who may be at the start of their financial journey.

“Affirm’s approach of focusing more on consumer lending, by contrast, takes it into a more profitable space, but also into direct competition with the banks when they become more active in this space,” Walia continues. “I think Klarna has the least differentiated service, making it more vulnerable, but they have the biggest merchant footprint. I don’t have the data to support this but I’m guessing their 90 million customer relationships aren’t as sticky.”

Besides acquisitions, we could also see more partnerships in the future between major BNPL players, writes Yaacov Martin, CEO and co-founder of Jifiti, in an blog on Informa’s Fintech Futures site.

Martin cites Stripe agreeing to a strategic partnership with Klarna in October 2021 to offer the Swedish firm’s BNPL payment method to its merchants without acquiring the company as an example of such a mutually beneficial partnership.

In a press release announcing the partnership at the time, Stripe noted it would benefit by “Klarna making its flexible payment options available to millions of internet businesses already using Stripe across the U.S. and 19 countries in Europe.”

What Does it Mean For Banks and Credit Unions?

For traditional financial institutions, the rapid rise of BNPL offers several opportunities. More banks and credit unions may look to acquire existing BNPL platforms rather than build their own, observes Johnson. And if they did decide to build their own, they would already have a leg up due to their existing infrastructure.

“Banks already own the important relationships with merchants and small businesses,” Johnson explains. “They could possibly look at creating their own BNPL networks. There’s no reason that banks can’t compete in the same way [as BNPL companies] on both sides of network — merchant and consumer.”

Banks and credit unions have several built-in advantages if they want to compete directly with BNPL fintechs.

Ruby Walia agrees traditional institutions have advantages if they want to compete in the BNPL space. These include an existing base of customers who already trust them to keep their money and data safe, understanding of customers’ financial strength and spending patterns, multiple channels of engagement, and the aforementioned merchant relationships.

“I generally think banks bring more firepower to this fight with the direct-to-consumer fintechs,” Walia says. “Their biggest challenge is the cautious, risk averse mindset that prevails across much of the industry. That said, however,” he adds that “several banks have already made prominent moves in this space and the others will undoubtedly follow. This is a huge opportunity for banks and they should move aggressively.”

Some examples of banks that have made BNPL moves already include JP Morgan Chase with its My Chase Plan and Citibank’s Flex Pay, Walia notes.

Financial institutions should also think of BNPL as a lower-cost channel of customer acquisition.

“An example use case would be a merchant partner displaying a QR code next to select big ticket items,” Walia explains. “A customer could point their mobile device camera at the code and launch an application process for a BNPL purchase. If the customer doesn’t already have a relationship with the bank, this would be an instance of customer acquisition for the bank.”

Banks and credit unions also have an opportunity to play a significant ancillary role in the BNPL ecosystem even if they do not offer their own such services, Cornerstone’s Alex Johnson maintains.

For example, the number one reason why people miss payments for a BNPL loan is not because they don’t have the money, but rather because they lose track of all the different BNPL services they are using, according to Cornerstone research.

Financial institutions could be well positioned to provide tools that help consumers manage all of their BNPL loans.

A regular BNPL user might end up with four, six even nine different BNPL loans, all with different balance amounts, different repayment terms, and all happening simultaneously, Johnson points out. “So there’s an opportunity there for financial management tools that can be layered over the top of all that to help make consumers’ cash flow situations less complex,” says Johnson. “That’s the type of stuff banks and credit unions are really well suited with.”

Providing such services could make customer relationships more sticky and increase brand loyalty. Or, in some circumstances, financial institutions might also be able to charge a small fee for such services.