Subscribe Now Get The Financial Brand's FREE Email Newsletter
Financial institutions must win the battle of the mobile wallet to keep interchange revenue, which is a quarter of some institutions' noninterest income. However, they must also cater to consumers' growing interest in P2P payments, which cuts out interchange fees, and buy now, pay later plans, which chop interest income. But some surprisingly simple solutions may help.

On the payments side of banking, the battle for “share of wallet” has always been a critical element of profitability, especially for card payments. But even as the variety of ways to pay has expanded, share of mobile wallets has become even more contentious.

The thing of it is, financial institutions can’t fight on only one front in payments, especially in the wake of the pandemic.

While continuing to battle for credit and debit card business, banks and credit unions have had to recognize that failing to match consumers’ demand for convenience is deadly. Hence the importance of offering a P2P option (most often Zelle), which bypasses cards and wallets to draw directly on transaction accounts like a very fast check.

However, the payments business intersects with credit, in the form of credit cards, of course, but more recently with buy now, pay later point of sale payments that function as short-term installment credit plans.

Payments Are A Rubik’s Cube:

Payments decisionmakers face a slew of moving parts in matching consumer demand and the need to turn a profit in a key banking function.

“Plastic” continues to dominate the payments mix, even when there is no physical cards, because they are being used on mobile phones or computers, observes Raddon in its report, “Moving Money Around: The New Payments Revolution.” The research arm of Fiserv had consumers rate various payment instruments by six criteria and credit and debit cards held their own.

In terms of usage, the study found that the average user makes 23.2 payments a month. Here’s how that breaks out by method:

Interestingly, while younger consumers use debit and P2P more than other generations, the difference is not as great as might be expected. Millennials make 0.9 monthly payments by P2P and 8.7 via debit card, versus Boomers who make 0.3 by P2P and 5.7 via debit. But the differences can’t be ignored, because of the growth seen in P2P, which we’ll address later.

The study also found that the more a consumer spends, the bigger a role both debit and credit cards play. Big Spenders averaged 50.2 payments per month and that included 15.2 debit transactions (30%) and 14.6 credit card transactions (29%). Only 1.5 were made by P2P payment in this group.

The study divided the respondents into four groups:

The average age among the Majority Digital is 50, with Millennials and Boomers dominating the mix. The study found that using credit and debit cards, actually or virtually, makes up more than half of their purchases. 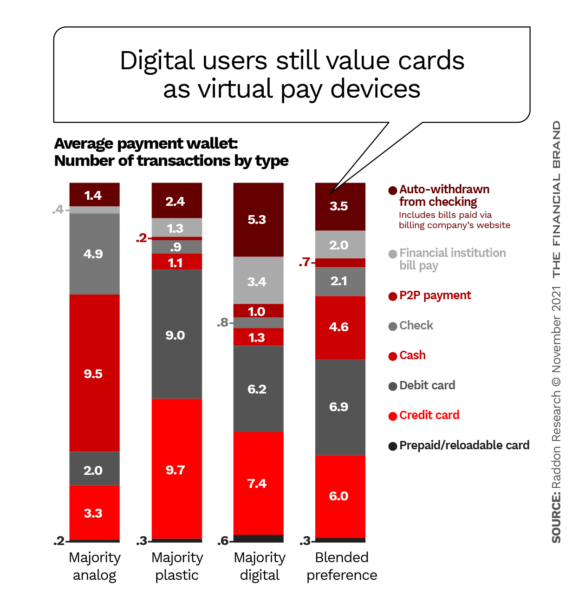 Nothing stays still in payments. The study found that almost half of Millennials have replaced physical debit or credit cards with P2P apps, which suggests that the skinny usage seen in the earlier figures will see growth as Millennials and Gen Z become bigger spenders.

‘One Card to Rule Them All’ Is a Competitive Motto Now

The industry is in the midst of battle over interchange income, and it is taking place on two different fronts, according to Caroline Vahrenkamp, Senior Research Analyst at Raddon.

The use of credit and debit cards via mobile wallets is a driver here.

“With the credit and debit rails becoming a much strong percentage of the transaction volume, interchange has become more important than ever. It’s a critical non-interest-income stream,” says Vahrenkamp. “Checks have gone far by the wayside compared to where they were. So there’s much more coming in from plastic, and interchange has become much more important to institutions’ bottom line.”

The report indicates that for banks and credit unions in the Raddon Performance Analytics program, 27% of non-interest income came from interchange, as activity with cash and checks diminished.

An All Or Nothing Game:

The first front for defending or expanding interchange income is the mobile wallet. Most consumers load only one card into their mobile wallet, according to Raddon. If it’s your card, your share of mobile wallet is 100%. If not…

The top-of-wallet card stands to gain all interchange income generated by a consumer, at least when they use their digital wallet. The flip side: Miss the mobile boat and you’re up a creek.

How do you win that skirmish? One solution is to make loading the card onto the phone a built-in part of the account opening ritual, at least for deposit accounts, Vahrenkamp suggests. Card issuers can’t count on the consumer getting around to it. (Making this a particular challenge is that increasingly accounts are being opened online.) Incentives can help, such as offering double points for using a card through a wallet, Vahrenkamp adds.

Something else that institutions did to incentivize usage of actual debit and credit cards 20 years ago might have new life now. Vahrenkamp says that banks and credit unions used to announce that using a card in a given month would enter the user in a contest. Today, the contest entry would be granted for those loading their cards into their wallets and then spending.

In the old format, transaction volume would shoot up, Vahrenkamp recalls. “Once the promotional period was over, volume would drop, but nearly always with a net gain. So you got a kind of stair-step effect every time you did it.”

A gimmick, but maybe worthwhile. “Once yours is the default card,” says the consultant, “it’s very unlikely you’ll be replaced.”

While banks and credit unions that offer Zelle are successfully competing against PayPal’s Venmo app, those payments might as well be done with checks or cash because there isn’t any interchange income. Among all consumer groups, usage of P2P is growing. This is especially so among middle-income people. 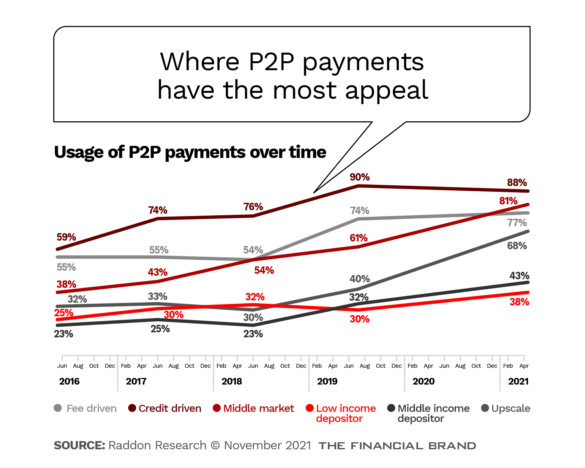 But, as the report states, “P2P is table stakes.” The issue here is control of the payments stream, so for now this front may call for a very different viewpoint. Incentives to use Zelle may be the best move right now, according to Raddon to avoid losing the volume. Replacing lost interchange income will call for some other solution.

The buy now, pay later movement at both the ecommerce and physical point of sale has a double whammy for banking, but it is an uneven one. True, when consumers pay via a BNPL plan, some interchange income typically is lost.

BNPL goes right to the heart of credit cards as lending vehicles. Most people who use BNPL aren’t going to roll over, generating lucrative credit card interest income.

“People who roll their balances are the biggest group at risk, because if a consumer can take time to pay off something, they’d rather do it at 0% interest, even with a slight fee, than do it at 20% interest or whatever rate they are paying on their credit card,” says Vahrenkamp. “That’s a no brainer.” 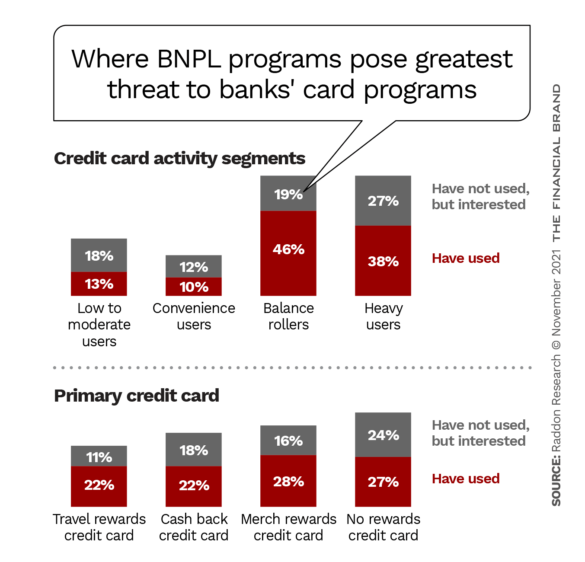 Indeed, Raddon’s study indicates that plenty of people — nearly half of those surveyed who typically revolve — who would otherwise be rolling over on their cards have either tried these plans already (46%) or are interested in trying them (19%). In addition, 55% of people who describe themselves as credit driven have used BNPL plans and 25% would like to.

“The more we look into our data, the more we see that that group is really embracing buy now, pay later,” says Vahrenkamp. “And that’s going to cut into institutions’ revenues.”

What’s worrisome for card lenders is that younger cardholders are much more likely to be rollover candidates. BNPL could grab a big piece of the next generation’s borrowing.

The pace is going to pick up because these programs represent a much better deal for retailers than dedicated store cards, according to Vahrenkamp. The key for both efforts is increased sales, and subsidizing interest is inexpensive when weighed against the much larger consumer population that could buy via BNPL, versus a store card that they must have qualified for beforehand. It’s simply a bigger pool of buyers.