Subscribe Now Get The Financial Brand's FREE Email Newsletter
Amazon has the muscle to completely transform the entire payments landscape, and their rejection of Visa payments could bring radical changes to the ecommerce space, disrupt the balance of power, and impact every Visa-issuing bank and credit union.

Amazon not only represents a huge ecommerce stream on its own, but also the sales of over six million merchants selling on the behemoth’s sites globally. All those sales represent a huge stream of payments, so Amazon enjoys a form of collective bargaining power that only a few other retail organizations do.

That makes Amazon’s payment practices and strategies of critical interest to banks and other payments providers. The disclosure in November 2021 that Amazon would stop accepting Visa credit cards on its U.K. website as an objection to Visa’s high interchange fees is a big warning light for payments companies. But the intensity of that signal increases when viewed with other Amazon-related developments. 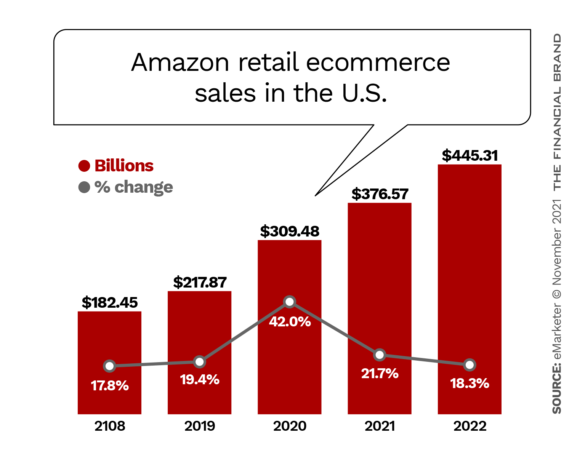 For example, just before the U.K. news, Amazon had announced a major deal to accept Venmo beginning in 2022. Earlier still in 2021, in Australia and Singapore, Amazon decided to only accept Visa if shoppers using it paid a 50 basis points surcharge. These measures come as both Visa and Mastercard plan to implement increases in interchange and other fees in April 2022, hikes that had already been postponed due to the pandemic.

In addition, the rumor revved up again that Amazon is seeking a different partner for the co-branded credit card it currently offers with JPMorgan Chase.

The question lingering behind all this is how much is for real and tactical, how much is posturing, and how much reflects a change in the balance of power between payments providers and huge ecommerce sales platforms.

Resistance to the fees of card companies and issuing institutions isn’t a new thing, with merchants using the courts and legislation as levers. However, the size and ubiquity of Amazon drives this to a new level.

There is also some symbolic value. “Amazon’s decision to go the unilateral route rather than through the courts signals a level of confidence that it need not go through legal channels to get what it wants (in this case, lower interchange rates),” an analysis by PYMNTS.com states.

Any card issuer who analyzes their customers’ usage will find that Amazon will always be in the top five of the places they spend money, according to Richard Crone, CEO at Crone Consulting LLC. That standing has only grown stronger during the pandemic.

“The most important use case for any card product is Amazon. If Amazon stopped accepting Visa in the U.S., every Visa issuer would feel it.”

There is a level of gamesmanship underway, and how it turns out isn’t just about Amazon.

The precedent that will be set will ripple through to relationships with other ecommerce platforms, according to Thomas Layman, President and CEO at Global Vision Group, an electronic payments consulting firm. (Layman is a former Chief Economist at Visa.)

There are other large ecommerce platforms out there that would like to negotiate down their processing pricing. Some have labeled Visa’s move a variation on “the Costco play.” This refers to the warehouse store chain which formerly accepted only a co-branded American Express credit card, but which switched to an exclusive deal with Visa and Citibank in 2016. Layman says that huge players like Costco and Amazon can negotiate better interchange rates because they bring so much revenue to issuers and the payment networks.

Apparently to demonstrate how big a deal fees are for Amazon, it has offered U.K. customers £20 — about $27 — to use something besides Visa credit.

Read More: Credit-Hungry Americans Like BNPL, Cards (and Whatever’s Next)

Will Amazon Really Cut off Visa in U.K.?

In later coverage after the initial bomb dropped, Visa officials insisted that negotiations were continuing behind the scenes and that shutting off Visa on Amazon U.K. was not a done deal. (The U.K. market only became an issue after Brexit took it out from under European Community rules, which significantly restrict interchange fees.)

Stock analysts typically minimized the impact on Visa itself. In a report, Sanjay Sakhrani of Keefe, Bruyette & Woods estimated a very small change — a drop of under 50 basis points in annual revenue.

He noted that there is a bigger picture, however.

“It is clearly not a positive development that Amazon is trying to change consumer behavior, thereby validating investor fears related to open banking and other emerging alternative forms of payment,” he stated. The analyst added that it was unclear what had triggered Amazon’s taking its objections public.

“Historically these issues have gotten resolved, and it’s important to keep in mind that ultimately, Visa is mostly protecting issuer revenue streams in this public negotiation process,” Sakhrani wrote.

“Both entities have a lot to lose,” says Global Vision’s Tom Layman, and he suspects both sides will come to some agreement rather than let the cutoff actually happen. Crone points out that although it’s great for Amazon to save transaction costs by working down fee levels, “they only choose lower-cost vendors to the extent that it won’t cost them sales.”

“Tender steering” — incenting or guiding customers to use a particular payment method — and “least-cost routing” are two ways merchants attempt to contain or reduce payments processing costs by putting them through cheaper channels. And Amazon already enjoys some savings through its co-branded card programs. Layman says rumors are floating around already about Amazon shifting to a surcharge in the U.K. as well, in lieu of dropping acceptance.

However, this may not be the way the story will end.

Is Amazon Playing Its Venmo-PayPal Hand?

Crone suggests that what’s happening in the U.K. is more than a feint by Amazon to save on fees.

“This move is not just a shot across the bows,” Crone insists. “It actually hit Visa’s ship.”

Crone sees a strategy behind the surcharges in Australia and Singapore and the move in the U.K. He believes these are tactical moves, “skirmishes,” as he puts it, to lead up to a bigger move closer to when Visa plans to hike interchange fees in the U.S. in April 2022. While Amazon Australia is growing rapidly, sales there are a small fraction of U.S. sales, so the April interchange pricing change looms as a sort of “D-Day” for the etailer’s war on fees.

The timing of the PayPal-Venmo deal was not accidental, suggests Crone. While initially it only involves Venmo, Visa accounts can be tapped to replenish Venmo accounts. In addition, it’s generally expected that acceptance of PayPal on Amazon is coming.

“This gives Amazon a back door way for accepting Visa,” even if it slams the front door as it says it will do in the U.K., says Crone. But it’s not just access — it’s a matter of cost. Amazon is picking up preferential processing costs in its deal and would get Visa sales at the PayPal-Venmo rate, he says.

PYMNTS.com observes that “the power of the platform is in evidence, where partnerships with the fintech upstarts give Amazon a way to promote a new payments feature, and squeeze the card networks a bit.”