The payments space is rife with overblown predictions. The annual report for 2022 of the Global Payments Innovation Jury actually ranked the jury members’ nominations for “most overhyped payments innovation,” which was as follows:

Yet not everything is “vaporware.” In addition, the twin scourges of inflation and recession may reintroduce gravity to payments developments. With that in mind here are five payment trends to watch for in 2023.

When a company gets to be the size of Amazon, it can cause trends all by itself. In late October 2022, just in time for the holiday shopping season, the online retailing giant announced it would begin accepting Venmo for purchases through its mobile app and on its website. The deal, pending since late 2021, would be a major boost to Venmo usage.

Venmo has approximately 90 million users in the U.S. Many users fund their Venmo purchases from their bank deposit accounts, which turns Venmo into a quasi debit card on Amazon.

Financial institutions pick up some interchange income from when consumers load money from their deposit accounts into their Venmo accounts. (By contrast, bank-owned Zelle is barred from competing with financial institutions in the debit space.) The ecommerce giant is actually trailing its rival, Walmart, as Walmart has been accepting both PayPal and Venmo “P2P” services on its website and in its stores for some time.

During PayPal’s second quarter 2022 earnings briefing with analysts, CEO and President Dan Schulman said that he was excited about the deal. Venmo skews towards younger consumers, many of whom use its social media channel to talk about what they’ve bought, which gives merchants free publicity. “On all of these things you start off in one place and then you see how things evolve from there,” said Schulman.

Keep Venmo on your radar. More broadly, Schulman observed that “PayPal started off many, many moons ago as a P2P business and then started monetizing merchant payments. Venmo started off as a P2P business. It’s got a ton of advantages that PayPal didn’t have those many, many years ago. ‘Pay with Venmo’ I think will be the dominant way we will monetize Venmo going forward.”

Personal finance guru Dave Ramsey sells books and more on his website, but you can’t pay with a credit card. The site explains: “If you’ve ever listened to The Dave Ramsey Show or read any of his books, you know he helps people out of debt. Credit cards add debt. Debit cards pull from your bank account. They work like cash.”

Ramsey has company in this view. Multiple studies indicate that more Americans are shifting to debit cards as well, for a host of reasons, one of them being to avoid credit cards. Ramsey’s company is actually sponsoring a new debit card of its own, Gazelle, in conjunction with Pathward, N.A. (formerly Metabank). Unlike many other debit cards, Gazelle features rewards.

Debit cards overtook credit cards as consumers' most preferred payment cards in a survey by 451 Research.

More specifically, the firm’s research found that for households with annual income of $75,000 or more, credit cards are their primary card. For households below $75,000, the preference is for debit cards.

Significantly, this synchs with PSCU’s “Eye on Payments 2022” study, which found that 52% of people with annual household incomes below $75,000 preferred to use debit cards. Note that U.S. median household income for 2021 came to $70,784.

What’s driving the preference for debit. The 451 study cites multiple reasons the firm believes debit cards are taking off. A significant one is that younger consumers are leaning towards debit cards, in part because of reluctance to get into debt and in part out of security concerns. PIN-based debit offers an additional layer of protection over credit cards.

Many people loaded debit cards into digital wallets as their default option during Covid and some of that stuck.

A surprise: “We expected consumers to have a much higher preference for credit when travel resumed and stores reopened,” states 451. “However, we’ve found that consumers prefer debit more today than they did at the height of the pandemic.” Among younger generations, debit use increased in double digits in 2022 over 2021: Gen Z, 26.8%; Millennials, 18.4%; and Gen Xers, 18.6%.

BNPL impact on debit: Typically the first installment in a buy now, pay later purchase must be paid for on that day, and typically that payment is made with a debit card. Often the subsequent installment payments are also made with the debit card, according to the 451 report. The firm found that 26% of all consumers surveyed had used BNPL for buy something in the previous six months and that this rose as high as 51% for Gen Z.

451 suggests debit card issuers consider adding some element of installment payments. The firm thinks that could help solidify preference for debit cards among younger consumers, who could continue to see installments as a credit substitute even as they grow older.

Economic concern drives debit. Worries about a recession might also play into lower-income consumers’ leaning towards debit going into 2023. “76% of respondents with a lower annual household income agree or completely agree they are concerned about their personal finances as a result of the economy,” according to the PSCU study.

The appeal of debit has not been lost on major neobank competitors like Chime, the 451 report points out. And banks and credit unions have to watch the new Apple Savings service as it rolls out and receives updates.

“Apple’s Savings account version 1.0 doesn’t support direct deposit, debit cards, ATM withdrawals, bill payment, P2P, etc., but these functions can easily be accessed through the other registered accounts inside the Apple Wallet,” says payments consultant Richard Crone. “Over time you can bet that each subsequent release of Apple Savings will natively include not just all of the legacy features of checking and cash management accounts, but also new features.”

Many negative headlines have been written about buy now, pay later offerings and, while obituaries may be an overreaction, change continues to come.

The Global Payments Innovation Jury report, sponsored in part by the World Bank, summed up the immediate future succinctly:

“BNPL usage is set to increase in the short/medium term because of strong benefits for consumers and merchants. However, credit losses are viewed as likely to increase significantly, and the sector is certain to lose its unregulated status in many major markets. Therefore, the rapid expansion is seen as a short-term phenomenon rather than a long-term game changer.” 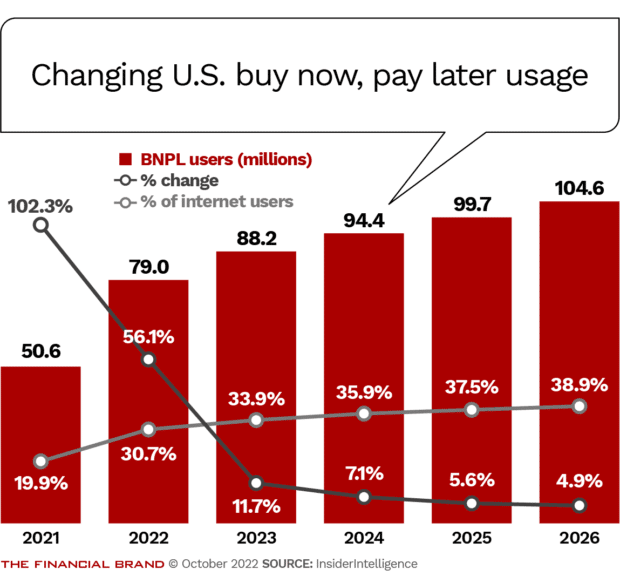 Clearly, in the U.S., the Consumer Financial Protection Bureau is going to regulate BNPL in the future, with rulewriting underway, in the wake of its major report based on fact-finding among the leading players. The bureau has already issued an invitation to BNPL firms to “volunteer” for examinations ahead of regulations. This will change the business, but in the buildup to this in the U.S. and other countries analysts have pointed out that BNPL providers saw it coming and were beefing up compliance functions in anticipation of regulation.

Insider Intelligence argues that this form of payment and credit will be moving from “BNPL 1.0 to BNPL 2.0.” As illustrated in the chart above, while growth will continue in BNPL as additional players get into the business and more consumers try it, the growth rate in users will flag significantly.

What to watch for: Even as banking institutions step up their involvement in buy now, pay later, current BNPL providers will expand beyond their original offerings in order to drive more income, Insider Intelligence predicts.

Credit card habits influence BNPL habits. Evidence mounts that BNPL use isn’t all about one trend. McKinsey’s 2022 Digital Payments Consumer Survey analyzed the attitudes of BNPL users who used credit cards solely as “Transactors” versus those “Revolvers” who carry a balance. The McKinsey report indicates that three-quarters of Transactors favor “pay in four” plans because they are interest-free. Only two out of five Revolvers choose pay in four BNPL options.

“This implies that Transactors, who are accustomed to avoiding interest charges on their credit card balances, also prefer interest-free BNPL products,” the report states. “Further, Revolvers more often indicate that they intend to increase their use of BNPL.”

Many on the Global Payments Innovation Jury, however, were pessimistic. The report indicated that they expect BNPL to see some near-term market momentum that “will eventually run out of runway as regulators, losses, and the wider economy catch up.”

As the chart below shows, consumers have a strong preference to “carry” digital wallets provided by their financial institution. In addition, research by McKinsey found that over two-thirds of Americans expect to have a mobile wallet within two years. Many think they will have three or more of them, which, the study says, “is a notable change from the legacy model of carrying around a single leather wallet.” 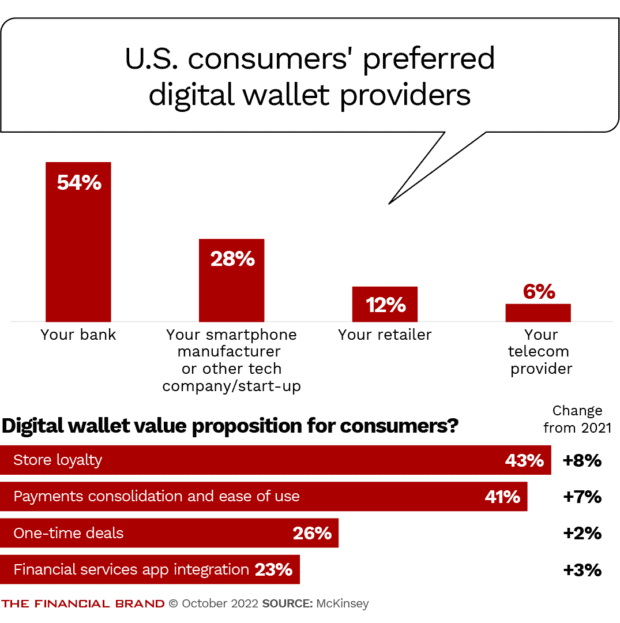 McKinsey’s research suggests there’s a disconnect in consumer thinking. Many express a preference for a bank provider, but the providers they mention when asked what digital wallet they use now aren’t banks: PayPal, Apple Pay and Google Pay. Not surprising since almost no financial institutions currently offer a digital wallet.

Marketing challenge: The key issues for most banks are 1. which digital wallets to support, and 2. how to have their card be consumers’ top-of-digital-wallet choice.

Another consideration, is that the PSCU study cited earlier indicates that of the consumers not using mobile wallets, 42% say they don’t know what they are nor how to use one. And 30% don’t believe they are secure.

A study by PYMNTS.COM and Ingo Money has probed how consumer use of fintech banking providers differs based on whether they consider the account their primary account or a secondary account.

Those who consider the fintechs their secondary financial provider use them chiefly to send and receive P2P payments, according to the study. 61% of these consumers make P2P payments via these accounts, versus 49% for whom fintechs are their main “bank.”

Regarding the first group, the study says that “they do not show any intention of using those fintechs for a full range of services — at least at first.” Right now many regard the fintechs as no-fee or cheaper way to send money.

A competitive yellow flag. Primary users tap fintechs for an average 3.7 different products, while secondary users use fintechs for 2.3 products. But Chime users overall use 6.2 services.

Regarding those consumers who use fintech providers for their primary accounts, the study ranked their usage of products and services this way: