This research study asks if consumers really want to “join the conversation” with banks? Are they even “listening?” Has the financial industry’s rush to social media paid off? Or not?

In the last five years, banks and credit unions have increasingly relied on social media as a communications channel. Most if not all of the largest U.S. banks have a presence on one or more of the top social media sites, and they are using this channel to communicate product changes, service enhancements and other happenings that are of relevance to customers.

A relatively small segment of consumers have reciprocated, using social media to contact (or complain about) their financial providers. A sliver of consumers utilize social media to find a new bank or credit union, primarily by asking their Facebook and Twitter friends for recommendations.

But has the financial industry’s rush to social media paid off? Is it worth it? And are consumers interested? Do they even care? These are some of the questions that payments provider TSYS has tried to frame in its report, “Banking & Social Media: Customer Communication Boom or Bust?”

TSYS surveyed 1,000 U.S. consumers who own a credit and debit card. Four out of five say they use at least one social media site — Facebook, Twitter, LinkedIn, etc. – and unsurprisingly, most are younger.

The study primarily focuses on one foundational issue: Do customers want to “join the conversation” with banks? And are they even “listening?”

One in ten respondents say they have used social media to complain about their bank or credit union.

During one focus group session, participants scoffed at the notion of connecting with their financial institution through social channels, dismissing it as silly. The discussion question evoked a sarcastic response or two, but the group collectively saw no real need to answer a question they found funny. They didn’t take it seriously.

“I’ve honestly just never even thought about it,” said one participant. That sentiment seemed to reflect everyone’s position. 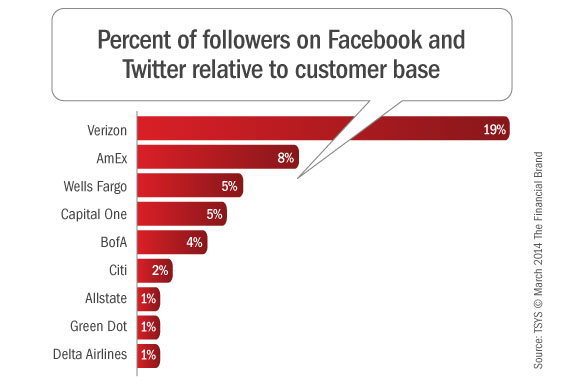 One half of participants say they do not pay attention to ads on social media sites.

The TSYS study isn’t the most intensive research project ever fielded on the subject of social media in banking — only four questions, and a handful of other charts/datapoints — but it does contain a number of insights that financial marketers will find fascinating.