Despite having a branch near Binghamton University, home to over 14,000 students, Visions Federal Credit Union struggled attracting young adults. Over the past few months, the credit union has tried to fix that with its Vision FCU Rocks program. The initiative involves a number of traditional- and non-traditional marketing tactics designed to raise their profile in the student community.

Coinciding with the start of fall term, Visions launched a youth-oriented microsite at VISIONSfcuROCKS.org. The site is geared towards students, taking the unusual approach of promoting financial products at two specific age segments:

Key Question: Why doesn’t Visions promote any checking, savings or other DDAs to either group? Why is it all about loans?

The microsite streams contemporary music tracks while visitors can learn more about the credit union’s various promotions, such as its “BFF Photo Contest.” The current promotion on the VISIONSfcuROCKS.org website invites participants to rewrite the lyrics to “The 12 Days of Christmas.” 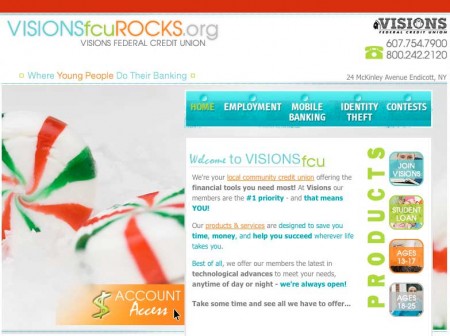 12 DAYS OF CHRISTMAS LYRICS CONTEST
“We’re asking you to come up with some new lyrics to this old song, ones that reflect the things that you really want! Be creative, be cute, and be crazy!”

On the surface, the microsite looks good, but a little digging reveals that it isn’t very robust. Over half of the links open to pages on the main Visions site, which is visually very different. It would be better to have all secondary pages on VISIONSfcuROCKS.org integrated into the microsite to create a more consistent and cohesive online experience.

As part of its effort to reach Gen-Y, the credit union also created a Facebook page (386 fans) and Twitter stream (182 followers). “These social networking sites are changing the way that our Gen-Y members are doing business,” the credit union says. “Visions has decided to utilize them as a way to communicate with this growing part of our membership.”

You can read the credit union’s entire Gen-Y strategy on the Visions website, where they discuss “social networking,” “financial literacy” and why “Gen-Y is important to Visions.” 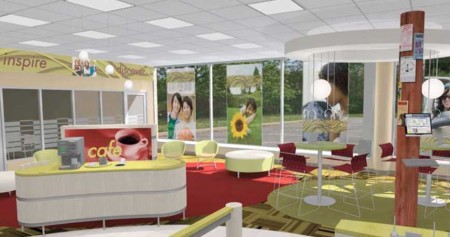 Visions promoted the new branch on the university’s radio station, distributed invitations in student orientation bags and mailboxes, and even printed custom t-shirts. Back in September, the credit union held a Guitar Hero Tournament at the branch to welcome back Binghamton University students returning for the new semester.

The credit union also partnered with Musicstream LIVE, a service that promotes financial literacy to young adults through live music, to hold a pair of concerts. Concerts held at the university and a local high school drew a combined total of over 1,500 students. Visions emceed the events, and hosted a booth where students could enter to win prizes and get more information about the credit union.

“This program creates awareness in the community that our credit union cares about the future of our young adults and does it in a non-traditional way,” said Jayne Searles, AVP Marketing & Business Development. “Feedback from administrators at both schools was fabulous. They thought it was a unique way to get the message out and a great way to start the school year off for their students.”

Visions FCU, has over $2 billion in assets and more than 122,000 members, with 23 branches throughout Central New York and Northern Pennsylvania.